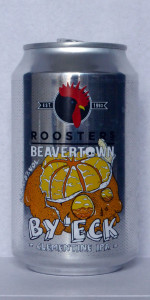 A 330ml can with a BB of Nov 2018 (canned Feb 2018). Acquired just the other day from Trembling Madness in York. This is a collaborative brew between Rooster's and Beavertown in honour of Rooster's 25th anniversary. The result is a clementine-infused IPA hopped with Amarillo, Crystal, Pacifica and Mandarina Bavaria.

A: Poured into an IPA glass. A rich, bright amber colour with light carbonation and good clarity. Produces a decent head of creamy white foam that lasts for a moment or two before rapidly settling to a thin surface layer.

S: Aroma of clementines with hints of citrus zest, peel, mild tropical fruit, buttery diacetyl, mild caramel malt and ale yeast. The diacetyl significantly detracts from the character of the beer and reduces the intensity of the citrus. Subpar.

M: Mouthfeel is smooth and tingly with light carbonation and decent body. Could be a tad livelier. Aftertaste of clementine, citrus zest/peel, diacetyl, mild caramel malt and faint ale yeast.

O: Hmmmm - regrettably not as good as I had anticipated. Looks OK, while the aroma and flavour possess a distinct clementine/citrus character with subtle malt and yeast bringing up the rear. Body is alright. The major flaw is the diacetyl, which is rather strong and spoils the aroma/flavour. It suggests a lack a maturation followed by filtering that prevents further improvement. A pity, as this is a brew that could have been stellar. Seek it out on cask if you can....


By 'Eck from Rooster's Brewing Company Ltd.
Beer rating: 3.3 out of 5 with 3 ratings