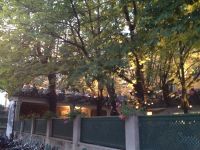 This brewpub, located on the Augustiner Platz, looks quite big from the outside. Theres a biergarten outside, and the brewpub seems to be on two floors inside. The upper level was closed when I went though, and they werent that many table on the ground level. The bar is quite long and takes more than half of the space. Behind it, two stainless tanks remind you that youre in a brewpub. We sat down and waited for a waiter to come, til we realized these guys were just staring at us but wouldnt come. In fact they were the brewers, who arent in contact with the public. The waitress finally came over. She had the same haircut as Germans second league soccer players (longer in the neck) and didnt seem to understand that we were foreigners. They had two beers, a weizen and a helles. Ordered the weizen, was told that they only had the helles (what a disappointment for a weizen lover, after checking their website where they talk about their weizen) Pretty tasty helles though. Still, how can a brewpub offer only one beer? Prices were cheap I thought, 3 euros or so a pint. We arrived in the afternoon so the real restaurant part was closed and it was more like bar food we could get; my sausages were decent, although I expected them to be grilled rather than cooked in the water. My friend seemed satisfied with his Alsatian sausage salad (the difference with the Sausage salad is that the Alsatian salad has some cheese in it, which costs 40 cent). I havent talked about the atmosphere enough. The crowd seemed quite diverse, which was cool. On the second floor, you could see a collection of old beer bottles, and it seemed nice too. But the first floor had a kind of cheesy atmosphere; I thought the brewpub wasnt aging well. Some renovation would make it really nicer, as right now its neither cool cuz its new neither cuz its old, its in the middle. And at one point they played thirty seconds of loud German techno on their stereo, dont know why. My advice: expand your selection and renovate your first floor.

I've rated the beer elsewhere so I won't repeat my comments about it's excellence! The two visits I have made with my family have both been in the evening, and once you have navigated your way through the young people chillin' on The Augusteinerplaats you begin to hear the hum of the beer garden. As you get closer you can almost smell the atmosphere. The beer garden itself is on two levels and the upper tier takes the form of a two sided balcony which allows you to gaze at the spectacle below and also into the the brew pub opposite. The staff are friendly and helpfull. Do not miss this on your trip to Freiburg!

This biergarten in the summertime is second to none... and the Inselhopf is magnificent!

If you are in Freiburg, do yourself a favor check out this brewpub. Their beer selection might be considered "limited", however, it won't matter to you after you try a 0.5 liter stein of their helles. Their beer is so smooth, yet full bodied... you will wonder where it all went after 5 minutes. I definitely consider their helles one of the best session beers I have ever tasted = A+ in my books.

Previous reviewer obviously came during closing time (mid-afternoon). He/she did not get to experience a true Feierling atmosphere. The brewery does Not need remodeling. The upper level showcases a massive copper brewing kettle (in the middle of the room) standing 2 stories+ tall.

Reservations are accepted, so reserve a table upstairs by a window. Plan on a great evening with your friends at the Feierling. I highly recommend this brewery!

Hausbrauerei Feierling in Freiburg, Germany
Brewery rating: 4.47 out of 5 with 18 ratings