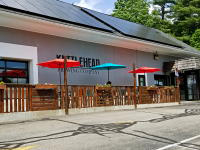 Beers, specifically NEIPAs are amazing. Food can be good, but varies - I've had a great burger, I've had a barely okay burger. Tried a large variety of foods over many visits and overall not much impressed. Service is also hit-or-miss. Some folks are interesting and appear to enjoy their job, while others don't seem very friendly whatsoever. Good selection that has gotten better over the years. Cans to go.

Right on the main road, just west of central downtown. A very basic and Spartan atmosphere. Rightfully busy, as the beer is above the cut, of average craft brewery. Favorite beers were the War Helmet Unicycle IPA & Nunchuck Ping Pong double IPA.

Vibe was good, plenty of outdoor seating which we enjoyed. If you are into loud music then inside is where you should be.

Quality of the beer was very good as Da Boss enjoyed the German Pils and i enjoyed the NEIPAs just reviewed.

Service was very good but then again it was not busy mid afternoon.

Selection was good with 13 items on the tap list, mostly NEIPA's but a porter, pils, saison, Hefe, pale ale, and cider where the other choice.

Food was very good as Da Boss thought the buffalo chicken sando was the best ever version. I thought the burger was good and the onion rings were perfect.

Overall it was a good stop. I appreciate the recommendation in the NE forum. Definitely stop if you are in the area!

This brewery was awesome...definately a place I had to stop by during my vacation in laconia...great beers on tap...excellent, knowledgeable server, and one of the best burgers I've ever had.

Parking lot big enough to fit my small RV. Super friendly vibe, and very good service for a big lunch time crowd. The beer was above average but the burgers and fries were greasy. I would love to go back when less busy, and enjoy a few beers.

First Kettlehead and enjoyed very much! This is to smooth for 8 ABV, you are warned. Next Nova will be paired with a juicy steak dinner.

Stopped here while heading up to Hill Farmstead from Boston. The vibe was pretty cool here. They had a good crew working who was very energetic and friendly. The music playing on the radios was straight outta the 80's which was fun. The beers were solid and the selection had a good assortment of styles. The food was really nice as well. I'd be sure to check the place out if you're in the area for sure.

I have family in NH and Kettlehead is a must stop every time I visit. Friendly/inviting vibe, fantastic food and most importantly tasty brews. They have the IPA crowd covered like most NE brewery's do but they also do excellent Sours, Bomb Pop w Raspberry being my favorite. Def worth a stop if you're in the area ( if in the area hit up Canturbury Aleworks as well )

A nice taproom, restaurant, brewery with great beer, excellent food and cans/growlers to go. The beer list is pretty varied with a little of everything and a focus on NEIPA-style beers. There is a full menu and you can see, smell and hear everything going on in the brewery as you hang out. It is a fairly chill place and is welcoming (despite overly loud music). The service was good and attentive whether at the table or buying cans to take home. The first thing that struck me was the lingering fruity hop smell that greeted me upon entry. The "store" at the end of the bar has all your merch/package needs covered and indeed is proof that these guys have all their bases covered right out of the gate.

Such a cool little spot. Don't judge by the outside, it's the inside that counts!

Vibe: Pretty standard brewery, nice tables and atmosphere, tables and the like
Quality: Very high quality beers. Overall IPAs were of the New England fruity variety, I quite enjoyed them. Enjoyed all their beers for the most part.
Service: Bartenders were funny and personable, had a number of laughs with them.
Selection: Mostly IPAs and DIPAs, which are big obviously. They did have a few other styles on tap too though, which was nice
Food: Fish tacos were utterly amazing.

Good selection of a solid range of styles.

The service was rather awful, but I would say the employees were just overwhelmed rather than lazy or truly uncaring. They are definitely trying but the attitude I got seemed to be that I was not welcome and more of an annoyance. I chock this up to being very busy, so I'll definitely give them another chance.

Beer here is top shelf and well all the food we have has been even better. The service has always been great and friendly. The noise level tends to be a little high. But overall well worth the trip.

Nice place. Not much to look at from the outside, minimalist industrial inside. The bar looked like it would seat about a dozen, several tables, including a high top. High ceiling. Best yet, no TVs!
Twelve beers on tap, with a good range of styles (Berliner Weisse to RIS, with several IPAs).
Food was great; they even had a vegan offering (lettuce wraps with a peanut sauce, beyond good).
Service was excellent. We were there with a regular, but I think that's how they usually roll anyway.
So, if you're ever in Tilton, NH, make this a must stop.

Relatively small, well designed, welcoming space, uncrowded when I visited midday on a Friday. Quality of the NEIPA's was top-tier although the other brews were sort of hit-or-miss, at least when I was there. Bonus points for at least trying multiple styles.

The service was friendly, competent and all-around exceptional. 5 for that because I can't see how it could have been any better (it probably didn't hurt that it was slow, though).

There were no cans available when I was there and, since they don't maintain their website and relevant FB posts are, at best, sporadic, there's no way of knowing if there will be any cans short of actually going there or calling them on the telephone. Hopefully they'll get on to that soon because I'd love to have a bunch of that hoppy fluff in my fridge. At any rate, everything on tap was available for take-away in 32oz crowlers so I didn't leave empty handed.

I can't speak to the food since I was drinking on an empty stomach, but it surely smelled good.

Easy in and out off I-93 in the Lakes Region. At the time I visited it was the only brewery within an hour or so.

Place has the metal/wood industrial/rustic vibe going that seems to be very prevalent in the craft beer scene. Small maybe room for 50 people or so. 10 seats at the bar. Heard it could be overwhelmingly crowded at times, but it was 3/4 full when I visited on an early Friday evening.

If you're into cloudy/hazy Pale Ales and IPA's, this place is for you. A bunch of the beer I tried was pretty fruity/OJ tasting - I'm OK with it for a certain time but really not my style. Their "Lactose IPA" was a horror show I'm quickly trying to forget. Also had an Imperial Stout that was just so-so.

Prices were reasonable, servers were friendly.

Good place to stop for a meal and beers while passing through, though I certainly wouldn't consider this place a destination.

Really enjoyed a lunch and several beers there with Sawdog505. Grabbed 2 crowlers of Agent and some Moon Rover to go. Food, Korean bbq sandwich w/kimchee brought me back to my days at Camp Red Cloud, superb. This place fills up quickly but is definitely worth the trip!

So I have been here over 10 times and I think it is finally time to review. The vibe is excellent, always have excellent music on and can always strike up a conversation with other people eating or just enjoying some tasty suds. Employees are good and always trying to learn from die hard beer lovers, and occasionally you get to chat with Nate and Sam the head brewers and I have had times that they actually poured me a small sample of the newest beer and you can tell this is a dream come true and they are so thankful to watch people enjoying what they have done.

Quality food and beer all top tier. Nobody could go and not find something tasty to eat or drink. Only thing they could do is maybe add a few more healthy options, but everything on the menu is deliscious, Nate's wig does a incredible job in the kitchen, one of the best burgers and pizzas you will ever eat, seriously. Always have awesome New England Style APA, IPA, and DIPAs flowing, along with some for the lighter color beer drinkers and the people who love darker malty beers.

In my opinion the place is great now and I truly believe they will only get bigger and better. A must visit destination for New Englanders or if you are traveling to the area.

Place is about as bad as it gets. We didn't even order. Lousy atmosphere, cheesey. I've never been to a slummy brewery, till now.

New place, visited about a month after their opening.

Large bar, open room with tables and high table wrapping the outside walls. Register straight ahead from entrance for buying retail cans/crowlers/swag.

Offer flights, 4oz, 8oz, and pint (can shaped glass) pours. They had 12 beers on tap during my visit of variable styles. Session IPA, IPA's and DIPA of course but also a brown ale, pilsner, goes, blueberry ale, porter, stout, scotch ale, red IPA and Rye IPA. Lots of brews and styles for a new place.

Food menu is medium sized, I had the burger, it was above average. Heard other people saying they enjoyed their Pizza and the Pretzel Bites.

Beer was all very good. I tried many of their options and brought some home. They had 4 options to go in cans and offered crawlers of most of the brews on tap. Quest was my favorite of the day. I tried many styles and none disappointed. The IPA/DIPA were the hazy New England style and all were good quality. Lighter carb and soft mouth feel. A mocha stout was also particularly good.

The service was very friendly and attentive. They did not seem to have a ton of knowledge about the beers themselves, but with the place being new I am sure they will learn. (Bartenders are the staff I interacted with).

A nice addition to the NH brew scene and I'll be happy to stop by whenever in the area.