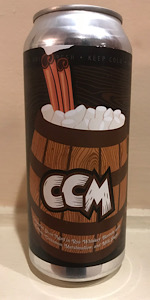 Notes: Cinnamon, Coffee, and Marshmallow, aged in rye whiskey barrels for a year. None of the flavors overpower the others, they all blend together in harmony. We're quite happy with how this one turned out, and hope you are too.
View: Beers | Place Reviews
Reviews: 2 | Ratings: 6 | Log in to view all ratings and sort
Reviews by thebeers:

Dark, garnet-tinted brown with over two fingers of airy, dark tan head that are quick to dissipate. Zero lacing.

Big cinnamon and marshmallow in the nose, with some coconut, Snickerdoodle and chocolate behind.

The taste follows. The marshmallow and cinnamon are very strong. There are coconut, sugar cookie and chocolate behind that, with a touch of alcohol burn and just the slightest hint of rye spiciness.

This may have the biggest marshmallow I’ve ever tasted in a beer. The cinnamon and the coconut impression are also both strong. The barrel presence is hard to detect underneath all that. It’s a tasty beverage, that to my preference, would have benefited from a stronger rye whisky impression.

Depths of the void black with almost no head whatsoever after the initial brown foam. Smell is amazing: rye whiskey and wood set the table for marshmallow, cinnamon, vanilla, chocolate and cookie dough. Taste hides the booze well, letting the adjuncts star, but the barrel is not lost either, nice balance. Feel is full, chewy, decently thick and smooth, very well balanced. Not overly decadent, but still a dessert for a cold night. The wife liked it