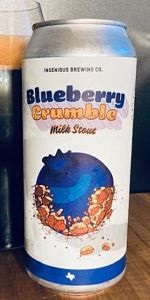 On tap at Hughie's

A: Pours a near opaque black color. A two finger tan head forms with good retention. Plenty of lace is left behind.
S: First thing I get is a medicinal fruit aroma. Blueberry for sure, but more like syrup and sweeteners added. This becomes very artificial after a while.
T: Like the nose, very medicinal like. Pie crust, cereal grains and blueberry syrup. Sugary sweet which becomes cloying and artificial. The cloying sweetness then defines everything, as I can't get past that.
M/O: A medium to full body. Low carbonation and sticky, actually seems almost under carbonated, which is pretty par for the coarse with these guys. Almost no definition here. Initially, this was just kind of OK to drink and get through. Then became so cloying sweet, and a real chore to try and finish.

I guess you can call this a desert beer. Though the medicinal fruit syrup character (that seems artificial), and the cloying sweetness makes this such a chore to drink. I just don't get these types of beers, and there is almost no kind of discernible stout characteristics. I found almost nothing I want to come back to.

Huge blueberry in the nose, with a very strong sugar-cinnamon pastry impression. Definitely smells the part.

Intensely strong cinnamon flavor, with some chocolatey milk stout beneath. That’s followed by a woody granola component and meek touch of blueberry in the aftertaste.

Medium bodied and quite creamy with modest carbonation.

There’s too much cinnamon, IMO. It steps on the other flavors — and the overdone cinnamon, or some other error, is imparting an unpleasant woodiness to the aftertaste. Not awful, but not one I’ll revisit.

Blueberry Crumble from Ingenious Brewing Company
Beer rating: 87 out of 100 with 11 ratings