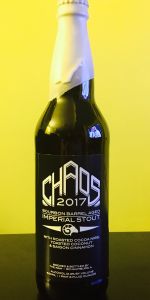 Notes: Chaos 2017's roots come from our second Side Note release, Gimme Samoa. We took roasted cocoa nibs, toasted coconut and Saigon cinnamon and aged it in our imperial stout, only after aging the imperial stout in freshly dumped bourbon barrels for 9 months. This complex, sweet, roasty imperial stout will change with time. Drink it fresh or store it cool in your cellar to experience the change of Chaos. Cheers!
View: Beers | Place Reviews
Reviews: 15 | Ratings: 62 | Log in to view all ratings and sort

An excellent, balanced take on the "pastry" stout.

Smell is toasted coconut, coffee, chocolate, maple, cola, nut, bourbon and cinnamon. That's a lot of distinct notes all in one.

Taste is roasty with chocolate, cinnamon, sweet coconut, coconut bourbon, vanilla bean bourbon, so, needless to say it's hot, but nice, with a medium body and very dry finish. A smokiness arise as it warms.

This bad boy was other-worldly! People had told me it was as good as Vanilla Rye but I don't usually buy into hype....no lie...this was nice an thick and boozy but still smooth with nice hints of Vanilla!

I was a bit underwhlemed on this one given all the hype and trades for it. Still outstanding but didn't blow my mind. Got mostly cinnamon dominant flavors that hid all the other notes even the barrel. Very smooth and velvety. Thanks to my buddy that shared at DLD.

Poured into a snifter. Pours out like motor oil with a small head. Smells of coconut chocolate goodness. Nice bourbon and chocolate with small cinnamon finish. Slick mouth feel from the chocolate. Oh my!!!!

Thick and dark and viscous with a thin dark head. Nice coconut and chocolate smell on the nose. All components in this beer come through in the taste in a very balanced way. Bourbon taste is there but not prominent. Wonderful beer.

650ml bottle. Served in a snifter glass. Pours a dark black body, one finger white head, good retention, bits of lacing. Smell is straight cinnamon with milk chocolate and some Almond Joy. Touch of green pepper and a shot of espresso in there somewhere. Flavour is really quite similar and very nice; cinnamon, milk chocolate, bourbon, coconut and coffee play around all over your mouth. Mouthfeel is medium-thicker bodied, substantial, good carbonation with a very nice cinnamon spice finish. A very nice beer, lives up to its relative hype.

L- Black with a tan head that fades pretty quickly.

S- Cinnamon and barrel with a touch of coconut.

T- Extremely well balanced for a beer of this style. Cinnamon up front with chocolate and a touch of coconut. More pronounced barrel as it warms.

O- Extremely well balanced heavy hitter. Can't wait to see what a little time in the cellar does for this beast.

S- Mostly cinnamon with a bit of oak. Slight whiff of coconut.

T- Well balanced. Nothing is overpowering. Cinnamon is the strongest flavor by a decent margin. Milk chocolate base with roasted malts and a bit of oak. Slight hint of coconut that's more prominent as it warms up, rounds out the flavor a bit more than anything. Not much booze.

F- Doesn't pour particularly thick. However, the feel is excellent. Rich, smooth and borderline chewy. A little warming on the finish.

O- Really nice beer. The obvious comparison is to Prop 14. I would say the base beer for Prop is better, but the cinnamon is more balanced in Chaos. That's a big point in its favor for me since most cinnamon stouts I've had were overpowering. My one knock on it is I would have liked a bit more coconut flavor.

Really enjoyed everything I've had by Shaun the Brewer. Hopefully he starts cranking them out at More Brewing soon!

S: Cinnamon bomb on the nose.

T: Flavor is mostly chocolate and cinnamon. No discernible coconut.

O: Inflated scores mainly due to Midwest hype. This beer falls somewhere between regular Hunahpu's and Abraxas in flavor and overall quality. Better beers can be acquired for far less effort.

On tap at the Ram. Nice barrel aroma and plenty of cinnamon to go around. A little toasted coconut on the fringe and nice roasty flavor. A real solid offering from Shaun.

My beer was poured pretty cold so at first the nose and taste was all cinnamon. After I allowed it to warm up to a good temp it became more complex. I still got the cinnamon up front but it was balanced out by a good amount of toasted coconut and sweetness. The chocolate and barrel characteristics were present but they were more subdued. This beer is very well balanced between all the adjuncts. Nice thick mouthfeel.

So, prop 14 with more coconut. Pitch black color. Nose is a nice blend of coconut and cinnamon. Taste is more cinnamon, hint of sweetness and barrel. Feel is full, thick and hearty. Fantastic beer.

User rodmanfor3 (see above): midwest hype? Lol didn't know that kind of thing existed. Needs palate clensed or to get one in the first place. If there is one thing that couldn't possibly be further from true about this beer is his assessment of 'thin mouthfeel'.

Pours black/extremely dark brown with no head except for right around the edge of class. The aroma is powerful. I smelled the chocolate and coconut from 3 feet away as the beer was being poured. Exceptional taste. While the beer is on the 'colder' side, loads of chocolate and coconut are present. As the beer warms, coconut becomes more pronounced, but the whole beer evolves into a marshmallow taste that's balanced exceptionally with bourbon. No single ingredient is overpowering or offensive,… just well put together and balanced. The feel is among the best out there. Viscous, sticky and fudge like. The more you drank and as warmer it got, the thicker the feel. Between each sip, the stickiness built and the taste continued to intensify.

This is a monster beer. It's hard to find another beer with all the ingredients to which it could truly be compared other than Prop '14. Prop 14 may have more going on initially in the taste, but Chaos '17 has a bigger feel at the end. Absolutely love this beer and I'm so happy to have some to drink and share with friends.