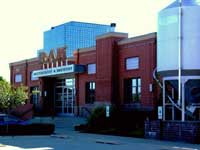 Nice place for dinner and brews! Definitely could use some work on the variety and quality of the brews, but the food sure is terrific! Overall a decent place.

had a couple three four bighorn blondes at the bar and dinning area. had the 1 lb. cub burger and tha huge carrot cake. I was stuffed. the food is good, big bar, a large row boat on wall in dinning for fun.so was the beer. its been a few years tho, I don't think it changed much. I know people who go there preiodicaly.

Can't believe I've never rated a RAM before. I've been to a handful, and the quality has been pretty consistent location by location. Since I'm most familiar with the Schaumburg location, that'll be the one I review.

The beers are consistent. I've never had a RAM beer that knocked my socks off, but I've also never had one that wasn't at least pretty good.

The food is maybe a step above your standard chain restaurant fare, and the beers are a step above, say, Granite City, or even a good number of smaller, non-chain brewpubs. Stopping by RAM doesn't generate the same king of enjoyable adventure vibe you get from checking out a new, completely independent brewery. But it does mean you're in for solid beer in a pleasant atmosphere.

All of the beers served icy cold whether they are an Oatmeal Stout or a pils.