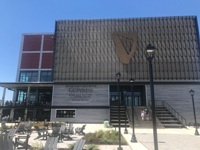 Notes: We’re here to combine 259 years of Guinness brewing experience with American beer creativity.
The U.S. is the world’s epicenter of beer innovation. American brewers excel at re-interpreting traditional styles and creating new ones. So, we decided it’s time to open our first stateside brewery since 1954. Our site in Baltimore will take everything we’ve learned in Ireland and up the ante with an experimental brewery, taproom, restaurant — and a barrel house, enabling us to experiment using our centuries-old expertise in aging beer in wood.

WE’RE LOCATED ON THE SITE OF THE FIRST MARYLAND DISTILLERY OPENED AFTER PROHIBITION.
Since 1934, whiskey has been distilled, aged and blended right here. The building that contains our tap room, experimental brewery and barrel-house is one of four rick houses specifically constructed to age whiskey in oak barrels. We’re just adding a new chapter for beer.