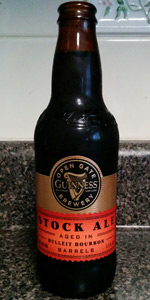 Notes: Fulsome, high gravity stout aged in bourbon barrels for several months. Then brewed a take on a barleywine style, with plenty of hops, and barrel aged it for a few weeks to mellow it out. This is a blend of these two separate beers.
View: Beers | Place Reviews
Reviews: 56 | Ratings: 128 | Log in to view all ratings and sort
Reviews by drunkenmess:

Some might say it's too thin, especially at 10%. But it holds its own. Crisp, refreshing body. With a distinguished flavor profile. Not too heavy, yet not too bland.

Beer poured dark brown with a very nice off white head that has some very good hang time.

Nose is very nice, especially when first poured, vanilla and bourbon jumped out immediately with some dark fruits in the background.

Taste is vanilla with a touch of bourbon wrapped up in a pretty good size malt base. Some dark fruits mix in very well. Finishes well balanced from the bourbon offset to the sweet malts. Alcohol was warming with the first sips.

Overall i am mildly surprised at the barrel factor as it is very prevelant. Base beer is pretty solid to provide the backbone necessary. Recommended if you like old ales/English barleywines.

Good with a sweet alcohol flavor similar to Boulevard quad. Gave me a splitting headache just like Boulevard though. too bad. Its good.

Poured into a Fremont small snifter. Pours a very dark mahogany brown, appearing nearly opaque black in the glass with a fine, half finger dark khaki head with great retention and nice lacing; reminiscent of a good cask Guinness stout pour. Aroma of dry caramel and dark toasted malt, bourbon, dates, light plums and cocoa. Flavor is dry caramel and dark toasted malt, cocoa, bourbon, coffee, oaky vanilla. Medium bodied with a silky, medium creaminess. Tastes pretty much like its label description: a bourbon barreled blend of (English) barleywine and Irish stout. The stout component is somewhat more robust than the Guinness we get here, but the barleywine is typical of the drier, maltier style. The body is quite fine and a bit of a surprise, hinting at a nitro pour. The flavor drops off slightly in the finish, but this is probably the nicest and most satisfying ale I've had from Guinness. They seem to often pull their punches towards a more mellow product, but this appears to be a full effort. I like the blend of barleywine and stout here and the bourbon and oaky barrel notes are very nice. Exceeded my expectations. Glad I picked this up.

This is an incredible beer, well-balanced and dense with complexity and character. All the points made by the brewer as to the beer's ingredients and composition are present and readily approachable (very nice very such a big malt and ABV beer). A truly awesome beer experience.

S - Very soft on the nose with light toasted malt.

T - Toasted malt with light bourbon and ends balanced with a little bit of oak.

O - Pretty subdued but stoked to see Guinness step it up a notch.

A: Pours an opaque yet still clear very dark mahogany in color with moderate amounts of fine active visible carbonation rising along the edges of the glass and moderate garnet red + cola brown colored highlights. The beer has a three finger tall dense sudsy foamy tan head that slowly reduces to a large patch of medium thick film covering a little more than 80% of the surface of the beer surrounded by a large patch of very thin film covering the remainder of the surface of the beer and a thin ring at the edges of the glass. Moderate amounts of lacing are observed.

T: Upfront there are slightly stronger than moderate flavors of roasted + dark + caramel + toffee malts with moderate amounts of caramel + toffee + dark fruit (fig + plum) sweetness. That is followed by moderate flavors of caramel + vanilla + toasted oak + bourbon. Finally there is a light flavor of earthy hops. There is a light presence of roasty bitterness which slowly fades away leaving lingering sweet malts + bourbon flavors.

O: Drinks pretty easily considering the strength - though this is definitely a slow sipper for me best enjoyed on a cold winter night. Enjoyable with a pleasant complexity and depth to the flavor + aroma.

Poured into a DFH tulip it has a dark brown body with a nice but quickly disappearing head. Smell is deep sweet dark fruit, bourbon and barrel. Smell opens up with vanilla notes as it warms. Taste started out overly bitter but corrected that as it warmed up. But the taste is oddly uncomplex despite all the dueling tastes. Everything just kind of sits there instead of interacting if that makes sense. Mouthfeel is ok but a bit thinner than expected.

I probably had unrealistically high hopes for this, for whatever reason, because this isn't bad per se but just doesn't measure up to expectations. I'm glad I just got a single because, even though I'd gladly accept this if someone offered, I've got plenty in my cellar fridge that I'd rather have. Maybe I'm spoiled.

L - pours as clear as brown can get. A bit red, a bit black. Not much head, but I can't say I expected it.

F - a bit thinner than I was hoping for a stout/barleywine mix, but that's Guinness for you. I also tell you hwhat: bourbon ain't this fizzy either.

O - I was oddly excited for this one and am a little let down because it doesn't feel as "full" as I wanted it to be. It does do a good job showcasing bourbon on its own, but maybe a little too good of a job. Where's the beer?

I like this beer, ale, stout, whatever. It's got a smooth, silky mouthfeel, warm, cozy, with hints of chocolate and barleywine. Can't tell that it's 10% ABV but it fits smell like it! Definitely has that classic Guinness taste though, but it's not so thick you feel like you need to scrape your tongue off afterwards. I can definitely smell some of the bourbon barrel that they talk about as well. This is a fine brew that I would love to drink regularly, but I believe it's a limited release, and $20/4 pack is just a wee high. To me it's a special occasion brew.