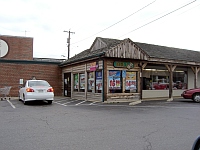 Reviewed by Crabbicuss from Maryland

Atmosphere: Well organized spacious isle's making it easy to browse and locate whatever it is your looking for. The restaurant side has several different large rooms some with tables and others with booths one room has a small bar which seats between 10-12. Nice intimacy in the booth areas and a pleasant family feel where the open areas are with the tables. Very clean.

Quality: Great food in the restaurant and from the deli. The the liquor store inventory is huge. With the recent major additions to the craft beer section they have pretty much covered all the bases.

Service: Excellent service in the restaurant, at the deli, and there is always several managers at the customers disposal in the liquor store.

Selection: The liquor store has always had a very large liquor and wine selection in which you can find just about anything your looking for. The plus for me and reason I decided to write the review was based on the MAJOR improvement regarding the craft beer selections. They have just about anything that is out right now and available in MD. I had several managers offer to special order anything I wanted which they didn't currently have in stock as long as it was still available. I recently enjoyed welcoming New Belgium Brewing to MD at a nice tasting held in the beer section of the store. They have quite a few tasting events there and they aren't always beer sometimes wine and/or liquor. They also have kegs.

Food: The restaurant and deli (the deli is located in the liquor store) have always been a personal family favorite. Great food from either venue with diverse menu offerings, always fresh and made to order.

Value: I found the prices at the liquor store to be in line with everyone else's. They run some pretty decent weekly sales too. Regarding the restaurant and deli, you definitely get what you pay for. If you want a quick tasty sandwich/sub or if you want to sit down to a real good surf and turf, the prices seem very reasonable.

Overall, this has become my go to place with all the recent additions and events being added. Word has it they are working on some Food Pairing events which would pretty much seal the deal. Top notch place and pretty convenient location wise. I recommend a visit for anyone who hasn't been there lately as all the changes they have made this my #1 stop.

Reviewed by Chaney from District of Columbia

Atmosphere: Impeccably clean, spacious, and well organized, with tons of wine, a deli, and a nice selection of macros and micros.... both cold and warm. This place is like a Total Wine, 7-Eleven, and Subway all rolled into one.

Quality: In terms of beer, they have a TON of macros, but they have some good craft selections as well. It looks like the deli is made-to-order, which is nice.

Service: The lady who rang me up at the register was very nice, enthusiastic, and very proud of the place (I assume she was one of the owners or managers). "We've been around for over 50 years!" she proclaimed.

Selection: Beer: All of the DuClaw staples were here (including Colussus) as of this writing. Also, there was at least a showing of most stuff distributed to Maryland. NOTE: I found a sixer of Br Harbor Cadillac Mountain, which for me, was a major find.

Value: The prices seemed pretty much in line with what I'm used to paying. Sure, DuClaw's Colossus was on the steep side at $31.99/bomber, but that is pretty much the suggested retail on the stuff.

The mere fact that this is right up the road from the Bowie Town Center, and a stone's throw from the Bowie Baysox stadium makes a worthy destination. I'll drop in every time I'm in the area from now on.

Reviewed by tatoodkelt from Maryland

4/5  rDev -2.4%
Rips has the biggest selection in the area. A nice range of Macro's as well as Micro's and seasonals. Alot of the East Coast crafts are represented here, Otter Creek, Allagash, Clipper City, Saranac, etc. and there are a couple of shelves where they have the interesting stuff. Skullsplitter, Arrogant Bastard and the like. Large wine and liquor selection as well. Everything is very reasonably priced. The food is decent in the attached restaurant, but I've only been once. Never tried the in house deli but it looks promising.
May 08, 2009

Reviewed by Imstillthegman from Delaware

3.2/5  rDev -22%
Interesting little shop with a deli inside and a restaurant attached to it. Lots of wine and liquor. Small beer section is all the way to left by the deli counter and straight back. Half of the coolers are macro and half are imports and micros. Lots of Samuel Smith, some DFH, Sierra Nevada, Anchor, SA, Ommegang, and a few others. You have to head further down to Waldorf for a better selection, but this place will do if you're not searching for something specific...just something good. I didn't get to try any of the food, though. Be sure to look up around the top of the wall when checking out...they have a nice collection of old beer cans displayed.
Nov 12, 2006

Reviewed by halfpgl from Maryland

4.15/5  rDev +1.2%
Rip's is a fine place. It's got the largest selection in the area and you must travel another 15 miles to find a better place. The Price is average the selection is good. They have a nice beer and wine selection but it's not outstanding. They obviously move a lot of product but. Half of the 16-20 coolers are dedicated to the interesting stuff and the other half to the macros. Dont try and get liquor on Sunday, Marylands crazy liquor laws are by county and PG still follows the old blue laws. The attached restaurant is solid home cooking fare.
Feb 22, 2004
Rips Country Inn Fine Wines & Spirits Shoppe in Bowie, MD
Place rating: 4.1 out of 5 with 9 ratings