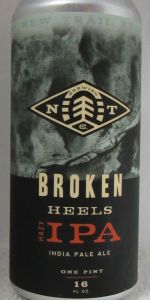 Aroma is papaya, orange zest, lemon zest, tangerines, and mild grassy and pine hop notes. It leans with sugary tropical fruit, which carry the bulk of the nose, being balanced out by doughy malts and grassy and piney hops.

Flavor profile carries those pine and grassy notes forward, while still being lead by tropical fruits - papaya, tangerine, grapefruit, orange zest, and lemon rind. Soft doughy malts rest behind. There is a tiny swell of sweetness right at the finish, which creates a "U" or bowl shaped flavor curve - sweet, balanced, sweet. Though, the sweetness never runs away from it.

Overall, this hits the notes of an NE IPA without being just hops. There is nuance within the hop play, and an intriguing, rewarding effervescence to back it up.

Smells of oranges, tangerines, onion grass and a hint of vinegar.

Citrus and oniony up front and nice bitter pine on the back end.

Overall, meh. It's nice, I guess. Kind of non-descript NEIPA-like a lot of them. Compared to some of the big boys in the NEIPA style, it's got a ways to go.

Notes via stream of consciousness: There's no freshness dating on the can, but at least they label the hops that they use. Mosaic is one of my favorite variety so I couldn't pass this by. It's also got Citra in it, and that's probably my favorite hop combination right now. Oh, and I also love the 19.2 oz. can because it fits properly in my British pint glasses. It's poured a cloudy brass colored body beneath an average-sized head of creamy white foam. The aroma isn't the brightest but it works. It's resinous and piney with notes of grapefruit, orange and lemon zest, passion fruit, melon, and berries. The flavor follows and although it's not as fruity as I'd expected it to be given the hops utilized it's still pretty nice. Maybe that's nice because it breaks from the pack a little bit, and another way that it does that is with bitterness. A lot of NEIPAs tend towards lower bitterness and thus more sweetness from the malt but this is balanced by a firm bitterness that leads it to a dry, piney and spicy finish. The alcohol is present but not hot. It's medium bodied and gently crisp in the mouth. Nicely done.
Review #7,528

Poured from a 19/2 oz. can. Has a cloudy golden color with a 1/2 inch head. Smell is of tangerine, grapefruit. Taste is the same as the aroma, hints of pineapple, mild to moderate bitterness. Feels medium/full bodied in the mouth and overall is a solid beer.

Hazy dark orange with a couple fingers of airy, white foam. Soapy lacing. Orange, white pepper, cantaloupe and herb in the aroma. Similar tasting with nice, fairly-strong bitterness in the finish. Creamy feel with low carbonation. I like the bitterness in this one.

Look...the usual off yellow almost completely murk. It looks appealing to me.
Smell...complete juice. Tangerine, tropical melon, grapefruit, smells very nice. not sure if the smell has faded...no canning date. new trail shame on you. Pleasant but subdued
Taste...Very nice tropical wave too start with eventual bittering dryness. really really nice
Feel...An excellent richness that is full and very poignant upon delivery. medium carbonation receding to no lacing on the glass
Overall...Very good beer and purchase at under 13 for the 4 pack. Pa prices i guess. They had a twelve of it but assumed it had been sitting a bit. Still this is an excellent beer that just happens to be a good value also.

12 ounce can poured into a snulip glass.

O---A very nice one. Just South of being a juice bomb.

16oz tallboy can courtesy of JayO'Rear. No freshness date that I can see.

Poured into the Tired Hands glass Jay sent me, this is an opaque shade of tangerine, with a decent sized off-white head. "Beer neglige" style lace.

Flavor stands out a bit from the nose. Fruit juicy flavor up front. Tropical and stone fruits. The juiciness is pleasant without being over the top, and it synchronizes well with the mild bitterness that comes into play near the finish, which is lightly dry. It's subtle, but, damn, this drinks quickly.

Medium bodied, with a light and slightly oily mouthfeel.

If the Bros had never changed the final score in the rubric from "drinkability" to "overall," I might be throwing up a 4.5 there. I feel like this beer is a study in restraint and balance. It's by no means a juice or fruit bomb like many hazies, and the bitterness in the second half is just enough to offset the sweetness in the first half. If it wasn't 7% abv, I'd almost consider calling it a session Hazy. I feel like I could drink the shit outta this one (and probably be remarkably hung over the next day for it). Thanks, Jay! This one grew on me more and more as I drank it.

Pours a golden amber with an off white head that leaves trails of lace.

16oz can purchased from the fridge as a single for $3.49 (I think that's how much they charged me). No canned on date, but I think it's relatively fresh.

Look: Pours a hazy, juicy orange color that is barely translucent. It had a significant head upon the pour but it receded, leaving some nice lacing in the glass.

Smell: The smell is very juicy and inviting. Up front there is lots of tangy orange and grapefruit. There's other tropical and stone fruit aromas that are not as clearly defined: some mango, peach, pineapple, guava, and papaya notes along with a bit of creaminess. On the back end and in the background, there is a green grassy/vegetal component to balance out the fruitiness.

Taste: Follows the nose pretty well. Up front, it's juicy, tangy, citrusy, and tropical. Huge orange and grapefruit flavors.
The finish is pleasantly bitter - a bit piney and woody - with a coolness and pithiness to it that is gently drying. Tasty, but feels to me like something is missing.

Feel: The body is a bit thin, which at the same time makes it more refreshing than if the mouthfeel was thicker. To me, it works.

Overall: It's a good NEIPA, but not my favorite. To me, it tastes like it's trying to be the beer that people think that they want to buy but it lacks uniqueness and its own voice. How many other beers have I already tasted that are trying to be that beer? Too many. Okay, so they threw Ekuanot in along with the Citra and Mosaic. Well, maybe I'm not the biggest fan of Ekuanot or maybe it just still tastes like a generic NEIPA to me.

The mouthfeel of the beer is astringent and dry.

The body of the beer is medium, medium-low carbonation, and medium finish.

The NEIPA does not have the juicy fruit flavors that I am accustomed to. The beer is closer to a hybrid than either spectrum of the IPA styles. Nonetheless, the beer is good.

M - Wet finish initially and then dries out significantly.

Solid hazy, another winner from NT.

Hazy and golden with a thinning white head, this brew looks decent. Sweet, tropical and citrus based nose, again still going good. Really balanced flavor leaves you dry and just slightly bitter, wanting for more. A bit less carbonated rounds it out. Pretty decent beer here. Could be closer to a 4.25.