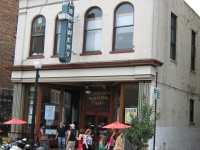 Rated by Oakley from North Carolina

Reviewed by briandschorr from North Carolina

Reviewed by logicalparadox from New York

Quality: Meh. I tried all the beers on the menu. The beers range from not very good, to good/OK, to 2 that hit or exceeded the 4 mark. So, I'd call it inconsistent. All the beers were drinkable, but with so much good beer out there mediocre has become a hard sell for me. There were so many other breweries in Wilmington that I wish I would have tried instead. They seem price-focused (blessing, to be sure, but possibly also a sign that they are less concerned with quality). $1.99 mug of the day specials are hard to beat. I'd rather pay more and get better beer and food.

Service: The staff are all young, but very attentive and high energy. Service was very good overall. Our server even hooked me up so that my beer selections cost me less (I ordered custom flights and just ended up getting everything on the menu anyway, whereas she saved me a few bucks by charging me as though I'd purchased the pre-planned flights. Unfortunately, our server didn't seem to really know beer at all.

Food: pub fare. We ordered all apps and just snacked more than ate a proper meal, but that's because nothing else on the menu that was calling out to us. Most of the menu is sandwiches and burgers. Of our appetizer buffet, most everything was fried, but fried well. Pickle chips were good. The fries were nice and crisp, but covered in a fake butter sauce that seemed like the sauce pizza chains give you to dip your bread sticks. The fries did come with a truffled aioli, though, which was nice even though I knew all they did was put a drop or two of truffle oil into premade mayo. The grit cakes were very tasty, and the beer nuggets were a novel item. The pretzel was OK, but I've had better.

Overall, an OK brewpub; but, considering the other local options, I'm amazed they aren't getting out-competed.

Reviewed by DVMin98 from North Carolina

Rated by Wvwineguy from West Virginia

Rated by Niedzws from New York

Reviewed by bigkingken from North Carolina

The location is pretty standard for what I’ve come to expect in a small-but-tourist-laden town. With a large number of historic brick buildings to choose from in Wilmington—after all, it is a port city in one of the original colonies—the site was sure to be charming. And it was. Lots of woodwork and unpretencious beer-inspired decorations made for a pleasant atmosphere.

The World Beer Cup awards hanging on the wall didn’t hurt either.

It was crowded on the Saturday evening we stopped in. No surprise there—it’s a family restaurant in a tourist town. There were a few more children running about then I would prefer in a brewery, but then again, there were a few more children running around then I would prefer anywhere. Despite the bustle, the two of us were seated immediately and a beer flight came not long after.

The selection was pretty decent. There were more beers than spots on the flight, so we just started working our way down the list. Nothing jumped out at me, and none of the styles were surprising. The blonde was actually pretty tasty for the style, the IPA had a nice finish, and the amber was, as always, palatable.

By the end we had ordered our food and had a second flight delivered, with all new beers except one. There again weren’t many surprises, except for their recent award-winning spring ale, which definitely lived up to the billing. I don’t usually go in for spring ales, but this one was different somehow. It had depth and layers of flavor rather than just being crisp and refreshing.

The food that came out of the kitchen was pretty on par with the food. It was good, fine and decent, but it lacked a wow factor. I got a classic pulled pork sandwich with barbecue sauce and coleslaw on top with a side of mashed potatoes. The sandwich was on par and the mashers were phenomenal. I don’t even want to know how much butter, cream and salt went into those things. My wife ordered a fried green tomato BLT, with chipotle remoulade on grilled sourdough. By the sound of it, the sandwich should have been heavenly. For whatever reason, it was average.

Despite the large number of customers, I felt pretty well tended. I wish we weren’t stuck at a table amongst a ton of families with small children, but I guess that’s what you sign up for in a tourist town.

In any case, the next time I’m in Wilmington, I might stop in for a single beer, but I won’t be having dinner here.

3.94/5  rDev +2.6%
vibe: 4 | quality: 4 | service: 3.75 | selection: 4 | food: 4
Been to this place a handful of times. This has a great feel all around. Outdoor seating in front of the entrance, a long L-shaped bar and downstairs booth seating, and an upstairs with additional table seating. This place can pack it in on the weekends, too. Especially in the summertime, or if there is a major sporting event going on. As far as that goes, there are tvs strewn throughout the establishment, so you can never really land in a seat that will cause you to miss anything. Along with their 10-12 beers on-tap, the Front Street Brewery has become one of the top Whiskey bars in NC. A huge, impressive list of whiskey/bourbon/scotch available here. When seated, the service is tremendous. Friendly, attentive, and prompt. At the bar, I've had mixed reviews. At times, it's been spot on. Other times, I have stood there doing everything in my power to grab the bartender's attention short of throwing a stool through the back mirror, and those times have not been particularly busy. Other than that, I have no complaints. They provide brewery tours, and the brewing equipment is viewable opposite the bar when you walk through. They have beer to go in the form of growlers, as well as the occasional rare bomber release, which have been some damn tasty beers. The food is great! Standard pub fare, but quite a lengthy selection. And there are always specials rotating on food, drinks, and beer. If you find yourself in Wilmington (and you should, it's a great town with a rapidly growing craft beer scene) you should definitely hit this place up!
Jun 23, 2014
Rated: 4.25 by Hop-o-saurus from California

Reviewed by Mantooth from North Carolina

Reviewed by dlj from Virginia

Reviewed by AmitC from New York

4.28/5  rDev +11.5%
vibe: 4.5 | quality: 4.25 | service: 4.5 | selection: 4
A very beautiful location in Wilmington downtown with the riverfront on the back side. I tried their sampler and it was presented and served in a professional manner with the rate beer rating sheet. Excellent and timely service. Do try their beers and visit the place if you are in Wilmington. I went for a walk with my wife after trying the beers and it was a great experience overall. Recommended.
Dec 28, 2013
Rated: 4 by flipdog0 from North Carolina