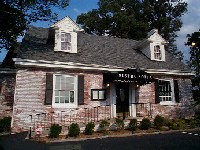 View: Place Reviews
Reviews: 4 | Log in to view all ratings and sort
Reviews by brentk56:

For an upscale restaurant, Bistro Sofia has, hands down, the best selction of bottled beers in North Carolina. The list has about 20 beers and represents a broad range of styles. There wasn't a single beer on the list that I wouoldn't drink.

The atmosphere is casual and sophisticated. Essentially, the restaurant is in a converted house near the Guilford College campus. There is a patio out back for outdoor dining in the warmer months.

The food is contemporary and creative and the server knew his beers, even though this is the type of restaurant where most of the partrons will order wine.

My favorite restaurant in the Triad, by a wide margin.

To be honest I felt really out of place just stopping in here A very upscale restaurant, at least by my standards, I just did not feel comfy inside. Menu looked great, though again not really thekind of place I usually find myself in. The beer list really did not impress me terribly, but again it may have just been me but I would not really consider this a beer stop. A great place to take a first date to try and impress them would guess but I would not call this a beer stop by any stretch. Not sure this one should be listed here.

I have dined at Bistro for years. The food has always been wonderful. The Bistro even has a garden in the back where they harvest fresh herbs daily and some vegetables.
The beer selection has greatly improved over the last few years. I like that the beer selection rotates and is based upon the menu offerings. The menu changes seasonally.
The Bistro has also hosted a few beer dinners with appropriate beer pairings. Every October brings a nice Germanfest offering. The menu is authentic and the beers are not your everyday German selections.

Bistro Sophia is a house that has been turned into a fine dinning restaurant. A wonderful fine dinning/white linen dinning establishment with incredibly reasonable prices on beer, wine, and food. Actually for a restaurant they have the best beer and wine prices in the triad. And can you say attention to detail? They focus on all the little things.

I first went into the restaurant with my fiancee to have a nice glass of wine and some tapas or appitizers to wind down at the end of the day. We sat and the bar because we knew the manager from when my fiancee was a wine distributor. This is when I was blown away. I looked into their cooler and saw their beer selection.

Samuel Smith's Oatmeal Stout and Organic, Rogue Hazelnut Brown Nectar, Tabernash Weisse, Steelhead Scotch Porter, Highland, Cottonwood, Pilsner Urquel, and many more. And what's this Bink? Bink? I've never heard of Bink? How is it that a fine dinning restaurant in the Triad has over twenty different bottled beers? Even more so they have a beer I've never heard of or seen in any store in the Triad. I was throughly impressed.

While Bistro Sophia does not have any beers on tap they do have over 20 different beers and many different styles, so it's not just 10 different ambers and 10 different lagers. They have stouts, Belgian whites, porters, lagers, and others. Great selection. They did have Bud, Bud Light, Miller Lite, and Amstel Light which were the only macros I wouldn't order. Everything else on their list I would drink.

Prices where great for a restaurant. Rogue 22oz or a Sam Smith 20oz $6. Their prices ranged from $3-$6.50 depending on the size of the serving and the beer. If NC didn't have a 6% ABV limit I know they would have some more Belgians and beers like Victory and Stone.

Value: I think the value for the beer and the food is incredibly reasonable for the quality that you get. The food would entrees run $15+, but it is a very nice restaurant that would serve more Belgians if they could.

Note: I rated the atmosophere high, but this fine dining atmosophere that is relaxed. Dress is smart or business casual to formal. They have a patio and a bar area plus some private areas. Great place for that special night out or just to have a relaxing beer and tapas at the bar. Probably my favorite restaurant in the Triad. Ask for Kerrie, the manager and tell him you came in because you heard they have great food and a good beer selection.

Bistro Sofia in Greensboro, NC
Place rating: 4.38 out of 5 with 4 ratings