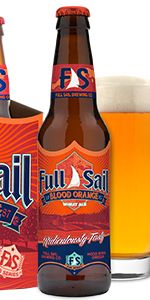 Notes: A Refreshing Wheat Beer with a Twist! Brewed with 2-row Northwest Pale, Malted Wheat, and Unmalted Wheat. Blood orange provides a subtle twist to this refreshing brew. It pours with a white lacy head and a hint of orange aroma. A medium malt body with a crisp wheat finish and subtle orange flavor.
View: Beers | Place Reviews
Reviews: 22 | Ratings: 71 | Log in to view all ratings and sort
Reviews by DucksFan16:

Light wheat ale aroma with a soft citrus aroma that in closer take has an orange quality but also kinda lemon too. A nice fresh sweet fruit. Not strong but enjoyable.
The blood orange isn't the color as this is more yellow with hints of the red/orange near the white dense head. Quite cloudy.
Spritzy in the feel with lots of small stinging bubbles. Almost effervescent. Quite drying on the finish. Am. wheat ale taste of wheat and the fruit isn't overpowering, in fact it's almost background to the wheat and pale malts. Soft bitterness with the dryness on the finish brings some sense of thirst quenching. The both linger quite a bit. Moderate feel is okay but I'm not fond of the carbonating in this one.
Still a fine wheat ale that would do fine outside, in the sun when it's warm out.

From a mixed 12 Pack. Pours to a permanent white head and gold- orange hazy hue. Aroma is definitely oranges and pale malts. Same for the taste. It delivers a very pleasantly sweet but not too sweet charge of orange flavor balanced with alcohol and malts. Not a "frou frou" beer at all. Light and smooth MF. Overall a pleasant experience as a stand alone, grown up alternative to an orange soda or cocktail or a complement to compatible dishes (think fish, chicken, sweet BBQ).

Picked up a single from TW Arrowhead in early June for $1.49. No visible bottling date. Warm weather seasonal.

Taste is pretty well balanced between the wheat malt base, the orange adjunct, and a decent amount of hopping to keep the puckering factor down.

Mouthfeel is a bit flat, not overly refreshing.

Overall not a bad beer, definitely an easy drinker and is worthy of a shot.

Smell: Soft aroma of light pale malts, wheat, a hint of cream and a (light than expected) scent of blood orange.

Taste: Lightly creamy, lightly sweet wheat with a minute hint of grain in the background. BO flavoring. Minimal bitterness. And still, there's that light background graininess. Small zip of suds on the finish.

Mouthfeel: Medium-light body. Medium carbonation. A smidge of creaminess felt on the mouthfeel.

Overall: A faux flavoring with a vapid base beer. No thanks.

No thanks, this smells like artificially-flavored soda. The base wheat beer is fine but bland, and while the orange recedes on your tongue, that aroma is knocking me out.

I bought a six-pack of Blood Orange Wheat Ale in a bottle shop. Poured in to a pint glass.

Pours a pale yellow/gold color, about the shade of pineapple juice. Hazy with a thin white head.

Smell is a sweet bread aroma with a little orange blossom note along side.

Taste os quite sweet and fruity. Orange flavors of course.

Overall a sweet wheat. I'd probably have it again.

Cloudy pale yellow with one finger of white head. Splotches of lace.
Smell is citrus and malt.
Taste is orange malty and a touch of hops for balance. A bit of light sourness from the wheat.
Mouthfeel is light to medium with good carbonation. Finish is lightly dry and semi sweet.
Overall a nice Summer refresher.

From a 12 oz bottle; revisited in November 2018 with a 12 oz can.
Hazy pale golden body with a decent if bubbly head.
Light body with medium carbonation.
Overly mild light wheat and citrus flavor that becomes more clearly orange in the aftertaste. Mild bitterness.

Cloudy light amber with plenty of long-lasting foam in the Wander snifter. Very sudsy and sprightly on the tongue. Mouthfilling carbonation but in a creamy, satisfying way. A little citrus in the aroma. Wheaty cereal in the nose.

I can't help think of Nesbitt's Orange soda. But this has a pleasant wheaty, malty flavor that also reminds me of a light Saison. Mellow but just barely sweet. Biscuity malt taste. Finish is nicely dry with a tangy aftertaste. Yet another unpretentious but delicious brew by Full Sail. From the 12 oz bottle purchased at Elizabeth Station in Bellingham.

Pours a murky light orange with a foamy bone head that settles to a partial film on top of the beer. Small dots of lace form around the glass on the drink down. Smell is of wheat, blood orange, and blood orange juice aromas. Taste is much the same with toast, blood orange, blood orange juice, and artificial sweetener flavors on the finish. There is a mild amount of bitterness on the palate with each sip. This beer has a good level of carbonation with a crisp mouthfeel. Overall, this is an above average beer that is drinkable, but there is an odd artificial sweetener quality in the taste that diminishes the drinkability for me.

Appearance – The beer pours a hazy orange color with a one finger head of fizzy white foam. The head fades fairly quickly leaving just a trace of foamy lace on the sides of the glass.

Smell – The aroma of the brew is decent of a blood orange smell mixed with a good showing of wheat. Along with these aromas comes some lighter notes of a rather strong showing of lemon and a bit of grapefruit.

Taste – The taste begins rather dry, with a more wheat bread taste and a little bit of an orange sweetness. The orange increases ever so slightly, but remains quite light overall to the middle of the taste. Along with these flavors comes some other tastes of yeast and some light pepper and a bit of herb. The orange increases slightly toward the very end and leaves one with a dry orange wheat taste to linger on the tongue.

Mouthfeel – The body of the brew is on the average side in terms of thickness and creaminess with a carbonation level that is actually on the slightly lower side. A little more carbonation may have been slightly better for the tastes of the brew, but overall the feel is alright.

Overall – A decent orange wheat brew that is on the drier side. OK., but nothing all that exceptional.

fresh on tap at the brewery in hood river. two things about this make it a winner for me. one, it isnt an ipa. too many citrus ipas lately, seems like we have forgotten about the fruity wheat style, and this time of year, thats a real shame. two, its not a sugar bomb. this is full of the blood orange flavor and all, but by the end its gone, no lingering candy sweetness like a lot of these have, makes it more refreshing and a lot more drinkable. i dont smell the fruit much in the nose, the white wheat malt is pretty robust on its own, but i sure can taste it. zesty from the peel, tangy and juicy from the flesh, really nice counterpoint of flavor and texture to the wheat malt, which is bready and puffy and fluffy. it ends up being a nicely balanced brew, not at all over flavored, and despite being fuller bodied for what it is, its crushable. great carbonation and a pleasant summery vibe about it all around. i never gave these guys enough credit i dont think until i visited the brewery. i was really impressed with the quality of all the beers...

edit: i believe they are calling this blood orange hefeweizen now, same abv, same subtle fruit profile just new packaging and a name, hefe instead of wheat. if its a different beer, its not that different, but someone let me know. its still not as yeast forward as i want the style to be, but i found the beer refreshing and real drinkable after a long day of heavy landscaping work. this has to be the same beer right?!