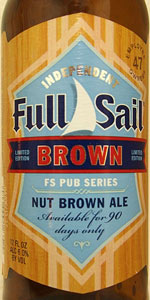 12oz picked up tonight at the COOP... Poured into my little CC goblet... khaki head dies pretty quickly but has decent lacing... the brew is deep chestnut brown.

Nose is definitely "nutty".. more of an English brown ale than American... nose shows some slight spiciness from I guess a continental hop variety... a bit of cocoa with warmth.

Flavor has more cocoa and a definite toasty malt element.. good malt complexities... hops again are there only for a light bitter balance and add a minor hop flavor that gives way quickly back to the malts.

Body is light/medium... carbonation is sorta soft like an English brown.

Pretty good... I don't buy many brown ales, but I will continue to pick this one up periodically.

A solid brown from start to finish, a bit bigger than anticipated but still drinkable. While it might no shake the earth with each sip it certainly makes its mark on the palate.

There was unabashed, unrestrained joy in my heart when it was recently imparted to me that Full Sail was coming to PA, tempered only by my supposition that it would all be relegated to the Philthadelphia market and none would be seen where SEPTA does not run. Like Joe Namath upon winning SBIII, I was elated to be proven wrong! Elated, ya hear me? I was also elated when I dated Elaine until she heard about me and Eta and then I was delighted to break it off and take up with Delilah. You get the idea. The wife of one of my many friends (I know, hard to believe that I have friends, but I pay them handsomely and regularly, so it all works out) came up to me last night, unbidden, and started gushing about how she loves this new dark beer in little stubby grenade bottles. I had to laugh and told her that although Full Sail has existed for a while, they just recently made like Chris Columbus and "discovered" PA. Welcome, Full Sail and may you never forsake us as Three Floyds, Pretty Things and Rolling Rock have seen fit to do! Don't get me wrong - I love(d) them all and would be ecstatic to see them return, but for now, we are on the outs.

To get into one of their bottles, the crown cap reads, "Tools Required". I went over to the local frat house to see if they could help me, but they bristled at being labeled "Tools". I then consulted the Interweb and discovered that they were referring to the Six Basic Tools of Man, in this case, the Lever and the Fulcrum. I employed a coin as a Wedge between the two and Voila! an open bottle was before me.

From the bottle: "Limited Edition"; "FS Pub Series"; "Available for 90 days only".

I initially had a finger of light-brown head, but it quickly fell away to wisps. Color was a deep brown with ruby highlights and NE-quality clarity. Nose had both a walnut/chestnut nuttiness along with an underlying pininess. I used to dislike this style as it could be too malty for me, but now everybody is cutting sweetness with hops. Good on ya, lads! Mouthfeel was medium and the taste was riotous in a good way - chocolate, smoke, mint, freshly mown grass, chestnuts. This may be one of the best Browns that I have ever tasted! Finish was a semi-sweet dark chocolate with a lingering smokiness followed by a breathtakingly refreshing mintiness.

This beer was CRAP! Don't waste your $$$! Leave it all on the shelf for me!

Pours chestnut with a finger of tan head. Some lacing & head retention

S: Slight woody & nutty notes
T: Nuttyness, dryness, some herbal hops up front & some woodyness. Woody hops as this warms, with some toastyness & dryness, slight sulphur tinge to this as well. Finishes woody & toasty with a touch of hazel nut & whisper of toffee

A fairly average brown, not one I'd reccomend, but not hard to drink

Eye: Color is brown with deep garnet highlights. The beer is clear and has active looking carbonation. Head is about 1.5 fingers and is creamy looking with excellent retention.

Nose: Nice malty aroma, caramel aromas and nutty aromas as well. Overall clean aroma, not much in the way of esters.

Tongue: Malty flavor, finishing off balanced with a touch of sweetness. English variety hop flavor comes through with just enough bitterness and flavor to give this beer a nice balance. Malt profile is nutty with carmel tones. Body is medium and in my opinion the carbonation is a little high, but...that helps keep this beer from becoming too heavy and cloying on the palate. Not overly complicated, this is a simple beer and its a very nice one.

Drinkability: This is a beer I'd drink again any day. The price on it is good and it is a great beer. I'd recommend this one to a friend. Easy drinking beer and this one would be real nice to cook with or pair with the right dish.

Pours a nice clean/clear dark brown color, nice carbonation, with a fizzy off-white head, not much sticky lacing left behind. The nose is malty, slightly sweet, with hints of toffee/chocolate. The taste is a little sweet, malty (lots), nice little touch of toffee/chocolate. Medium body. Overall a pretty tasty brew, glad to see it here.

I bought a six-pack of Full Sail Nut Brown in a grocery store. Poured in to a pint glass.

Smell is an earthy aroma, smoke and roasted grain.

Taste is also smokey with a peat flavor, and a mild caramel sweetness on the finish.

Overall a very drinkable brown ale. A littler like a Coke or a Pepsi without the sugary sweetness.

Nose is a bit muted with some hazelnuts and sweet caramel and hint of roast. Hops are there more so than most brown ales.

Taste is decent, but I don’t find it to be very nutty. Good balance of roast and chocolate malt flavors and hops are clean and leafy. The mouthfeel might be the weakest part of this beer as it lacks body, sweetness and some sort of nuttiness (to cal itself a nut brown). Flavors are good, but too muted and just kind of flows down the hatch un-memorably. It’s ok, but I was actually expecting a bit more.

Has a huge, cascading tan head. Retention is excellent. Dark brown in color with bright red hues. A bit of roasted nuts to the nose followed by that ubiquitous brown ale metallic character and some subtle cocoa. Tastes involves some cherry sweetness, a nutty middle and some earthy hops mixed in for good measure. Light to medium bodied and not as smooth as expected. Nothing groundbreaking, but flavorful enough to urge a second round.

I wonder if this is the same recipe as the brewmaster reserve series from a couple years back? Red-brown color, a little lace, so-so head. Aroma is slightly fruity, malty, bit of nut bread. Flavor is ore fruitiness, hint of malt specifically the malt flavor from malt vinegar. Overall not bad but not great. I would not purchase this again.

A: The beer is clear but very dark reddish brown in color and has a light to moderate amount of visible carbonation. It poured with a half finger high dense beige head that gradually died down, leaving a thin head covering the surface and a coating of bubbles down the sides of the glass.
S: Light to moderately strong aromas of nutty malts are present in the nose.
T: Similar to the smell, the taste is dominated by flavors of nutty malts and also has some notes of chocolate malts and hints of roasted malts.
M: It feels light-bodied and rather smooth on the palate with a moderate amount of carbonation.
O: This beer is easy to drink and delivers a nice nutty taste without having any sweetness.

Dark brown clear with a small off white head and moderate lacing.
Smell is dark bready malts with a wiff of coffee.
Taste is dark roasted malts with a decent back of bitterness.
Mouthfeel is fine for the style. Carbonation is just right.
Overall a very fine Brown leaning into the Porter category. Well recommended.

I love me some brown ale, and they seem to be increasingly difficult to find in the current craft world of super hoppy, high ABV, barrel aged, sour/funky beers. This one pours russet brown with a thin khaki head. Aroma is muted with just a faint metallic caramel note and a wiff of herbal hoppiness. Things open up a bit on the palate - dark fruits, toffee, more caramel, faint diner coffee and milk chocolate, more of that metallic note on the finish, and a pop of herbal hop flavor. Balance leans to the malt side of things with just a hint of bitterness to balance. Not a true English-style Nut Brown in my opinion, but a decent and drinkable American brown. I was hoping for a bit more, but you can't beat the value of Full Sail. A nice addition for weekday drinking and I look forward to the next Pub Series brew.

The phrase "nut brown ale" is music to my ears, given my enjoyment of those from Newcastle, Samuel Smith, et al. So when I saw that Trader Joe's had Full Sail's version for $6 for a sixer, I was optimistic about it being worth trying. Alas, the only thing Full Sail's version has in common with Sam Smith's vastly superior NBA is the name.

Mouthfeel: thin and brittle, with a carbonation bite, rather like cola or Dr. Pepper. This is the area where the ale is most let down. The mouthfeel is about as lacking in pleasure as one can imagine in an ale.

Overall: not an experience I'd be interested in repeating.

Nut brown ale is a specifically British style. If you're going to call your product "nut brown ale", you should use Sam Smith as a benchmark and try to improve on it. Full Sail does nothing of the sort with their effort; it's a thin, rather dull product with little to recommend it, especially when compared with Sam Smith's product.

Full Sail Nut Brown Ale has a thick, off-white head and a clear, somewhat bubbly, red-brown appearance, with a little bit of lacing left behind. The aroma is faint, but the drinker can pick up some subtle brown bread crust and sweetness, however, there really isn’t a lot there. Taste is of the same, with some sweetness an acceptable bitterness, and maybe some brown bread crust. Mouthfeel is light and watery (like lager), and Full Sail Nut Brown Ale finishes semi-dry, refreshing, and rather boring. Oh, it’s a very good beer, but for the price, one could do better with Icehouse, for instance, a beer that has a fuller, bolder presentation. Another example of a craft beer that makes the case for macro-lager.