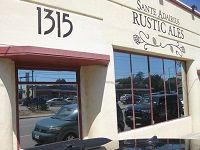 4.11/5  rDev -6.2%
vibe: 4.25 | quality: 4.25 | service: 4 | selection: 4
I stopped here to buy some bottles just in case this location might have something that the main location might not have. Didn't work. They told me that both locations are always well-matched in bottle inventory. We didn't stay to drink or eat here (review done for main location too), but it looks like a nice place to do so. It's a large open space with a bar that seats about 10 people, and barrels with stools and tables with chair or bench seating allow for a large crowd when busy. A few vine-shaded tables were located outdoors at the entrance.

There were 11 Santa Adairius beers on tap plus three guest taps, including Anna from Hill Farmstead and Pliney the Elder from Russian River. This location has a kitchen and the menu had some interesting apps and sandwiches. The place smelled smoky but I didn't notice anything on the menu that could have caused that. This looks like a place that's very worthy of some great beers and some food to go along with them.

The Portal consists of a fairly small pub with an outdoor patio for days when the weather in nice (so just about all the time in Santa Cruz. Even in early February, it was sunny with temps in the upper 60's). The vibe is laid back and relaxed inside, with smattering of table and chairs and then a modest size bar area to the left when you walk in. As I don't get to try SA beers all that often, I got a tray of small size pours (I don't think they do a sampler tray here) of various IPA's/APA's, the current TIPA, and then a Belgian style golden ale. Neither of us are big sour fans, and it wasn't as if West Ashley was on the draft list, so we stayed away from the wild ales/sours here. Quality was pretty good, but I can't say I was blown away by anything I tried. The TIPA was actually a bit of a disappointment. It was by no means terrible, but given the reputation of SA, I was expecting better. The Belgian style golden ale was surprisingly good I thought, and God knows the IPA's and pale ale we ordered were quite decent as well. Aside from the draft this, they also have an impressive bottle list for onsite consumption, with a number of SA wild ales, farmhouse ales, as well as some Belgian lambics. I want to say that there were 30 or 40 different bottles on the list, along with the 15 or 16 different beers on tap. I think they had several cans and bottles to go options the day we stopped by, and I believe they do growler fills here as well (for certain, select beers).

As for service, it's hard to give this place a great score for their service. Everyone was pretty friendly I thought, but there's no table service. You order at the bar and then carry your beers back to your table.

Really enjoyed stopping by and will likely visit again, the next time I'm in Santa Cruz.

Reviewed by sweetbrew82 from California

4.48/5  rDev +2.3%
vibe: 4.25 | quality: 4.75 | service: 4.5 | selection: 4.25
Hit this spot right when they opened on a Monday and had a great time. The bartender with long curly red hair was awesome. She was super friendly, knowledgeable and helpful with me and everyone else in there. Had "Then Again" and the De Garde, Jester King collaboration "Elements of Composition" and both were incredibly delicious! This place is a must for any and all beer nerds who are anywhere close to the area. Loved everything about it!!!
Feb 13, 2019
Rated: 4.4 by acurtis from New Jersey

Rated by CaptainHate from Ohio

Reviewed by Bum4ever from California