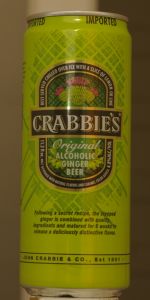 Notes: For more than two hundred years Crabbie's has shipped its ginger from the Far East -- following in the pioneering footsteps of the first Scots Merchant Adventurers -- hence our distinctive Elephant Trade Mark.

Following a secret recipe, the steeped ginger is combined with quality ingredients and matured for 8 weeks to release a deliciously distinctive flavor.

View: Beers
Reviews: 5 | Ratings: 20 | Log in to view all ratings and sort
Reviews by vidisad:

I have been awaiting an opportunity to review ALL of the Crabbie's lineup since adding many of them back in September 2018. I was only lacking Raspberry Alcoholic Ginger Beer, but having scored a bottle on Christmas Eve, I am now Green & Go! I actually have both a Bottle & a CAN of this one, so these reviews will be conducted back-to-back.

From the Bottle: "Best served chilled over ice with a slice of lime or lemon"; "For more than two hundred years Crabbie's has shipped its ginger from the Far East -- following in the pioneering footsteps of the first Scots Merchant Adventurers -- hence our distinctive Elephant Trade Mark."; "Following a secret recipe, the steeped ginger is combined with quality ingredients and matured for 8 weeks to release a deliciously distinctive flavor."; "Best served chilled with ice and lemon, Crabbie's Original Alcoholic Ginger Beer provides a uniquely refreshing experience - only for grown-ups!"

The mere Pop!ping of the cap unleashed a blast of ginger that filled my kitchen with a most pleasant smell! My aggro, C-Line pour reulted in a quick finger of fizzy, foamy, bone-white head with low retention that quickly reduced to wisps. Color was a pretty Amber (SRM = > 7, < 9) with NE-quality clarity. I might have said Gold (SRM = 5), except that it had an odd tint that propelled it slightly upwards. Nose was like raw ginger, the sort that comes with sushi. It tickled my nostrils & caused a slight burning sensation in my sinuses. Phew! The beauty of the Herb & Spice Beer style is that it merely needs to evoke the herbs and/or spices involved & this certainly did that on the nose. Mouthfeel was kind of thin & watery, not improved by a decided lack of carbonation. The taste was definitely ginger, although I did not experience it as powerfully as I did on the nose. There was a spicy heat on the tongue and it was quite pleasant, even without any of the suggested accoutrements. Finish was quite dry, thanks to the inclusion of spice (ginger). Overall, it was interesting, but it left me unfulfilled. I think that it would fare better as a mixer, like with Gin or Vodka, than as a stand-alone beer. YMMV. CAN comes next …

From the CAN: "Best served chilled over ice with a slice of lemon or lime"; "Following a secret recipe, the steeped ginger is combined with quality ingredients and matured for 8 weeks to release a deliciously distinctive flavor."; "For more than two hundred years Crabbie's has shipped its ginger from the Far East -- following in the pioneering footsteps of the first Scots Merchant Adventurers -- hence our distinctive Elephant Trade Mark."

How interesting that the labels on each serving style switch up the order lemon or lime vs. lime or lemon! Attention to detail is a hallmark of The CANQuest (tm). Also of note is that this came in a Slimline CAN.

Ah, a Crack! of the CAN's vent is like music to mine ears! It has been far too long as I have been involved in a Bottle Backlog foray, but not for the moment. I celebrated with an inverted Glug into the awaiting glass & was rewarded with just over a finger of fizzy, foamy, bone-white head with slightly better retention than from the Bottle. Color was again a solid Amber (SRM = > 7, < 9) with NE-quality clarity & a shade just slightly deeper than Gold (SRM = 5). Nose was not as pungent as it had been in the Bottle, or perhaps my sinuses were inured after that first go-'round. Still, there was no mistaking its gingery presence. My eyes slowly began to water as the spiciness took 'hold. Phew! The boldness of the ginger on my tongue was unrelenting as I drank through it. I still failed to understand how ice or citrus fruits were going to be an improvement while I CANtinued to think of it as a potential mixer. Finish was dry, spicy & kinda exciting.

I'm going to give it to Bottle in this head-to-head challenge, but only by a slight margin & perhaps due to palate fatigue following the Bottle review.

L: Clear gold-orange with fizzy fast-fading head and no lacing.

T: Too sweet. A little off-putting cloying sweetness not countered by enough ginger or carbonation.

O: Barely drinkable for me - could not tell it was a beer and would have just preferred a better ginger ale.

Decanted from an 11.2 oz (330 ml) brown bottle into a conical pint glass; no production information.
A: Pours a crystal clear, aged brass/yellow-green color with rapid, but transient, white head formation. Low retention and no lacing.
S: Aromas of ginger and eucalyptus.
T: Sweet. Palate follows the nose, medicinal, a little dank, and very obviously spicy with a tingling, cumin aftertaste.
M: Light bodied with light effervescence.
O: Drinkable. A little too spicy for my taste.

From a 12 oz bottle into a Perfect Pint glass, it’s a pale golden color with a thick head of fizzy white foam that quickly fades to a thin collar with some clingy lace. Nose is on point with a definite sweet-ginger aroma which seems natural, not artificial. In the mouth it’s similarly well-balanced with a nice crisp ginger snap balancing the sweetness. Body is crisp and adds to the overall experience. For my first alcoholic ginger beer, I’m very pleased. Would try again.

It pours a dark amber body with a fast fading head.

It has a sweet, strong aroma of cinnamon, ginger and fruit.

The taste is sweet and spicy, with notes of grapes, lemon and raspberries. I get a lingering burning sensation at the back of my throat afterwards.

A sweet tasting ginger beer. Maybe a little too spicy for my tastes, although I can see how someone else would enjoy that.