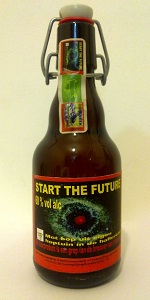 pours a pale yellow like a Miller High Life with no carbonation. Again, no head and a very thin oily lacing.

The taste is awful. somewhere between rock gut whisky and a cheap tequila. It burns and leaves a most unpleasant sweetness in my mouth. It still burns.

The mouthful is that of sweet rubbing alcohol, good thing I didnt have a cold sore.

Drinkability, Give me the Obilix quick, I need to rinse out my mouth.

Alright, so with Obilix being conquered (for lack of any better, more realistically deprecating, word), why not press on for more, for stronger? And, come on, how could an avowed ticker like myself turn down the opportunity to try the current strongest beer in the world? Let's do this: It pours a decidedly pale amber, closer to bronze, now that I think about it, with no real head of any kind appearing on top. The nose is dominated by a slightly sweet deluge of alcohol, though some random fruit esters and even bitter hop aromas seem to poke through every now and again, confusing things for fleeting moments before the booze drowns everything again. "Get back in the burning water!" indeed. The taste is where things went thoroughly awry for us. Full disclosure: VDubb tried this before I did, and he reacted physically negatively. And it was a seemingly worse reaction (though understandably different) than his visible disdain for the ghost pepper salsa we sampled a couple hours earlier. So maybe my opinion was clouded before anything ever touched my tongue, but I somehow doubt this influenced me all that much, given the results. This stuff is harshly sweet, harshly boozy, and somehow even slightly harshly bitter on the back end. There are really no other succinct descriptions, only overly-aggrandized hyperbole to give some idea of the pain the tongue had to endure, passion-style. I will forgo that route this time, if for no other reason than laziness at this particular moment. Suffice it to say: This stuff was painfully bad, yet still somewhat preferable to Chelada Light... The body is thick, kinda heavy, pretty much still, and syrupy. There isn't much room here for drinkability, but, then again, this is a 120 proof beer... Overall, I'm once again delighted and thankful to have had the opportunity to try such a beer, even if the experience wasn't exactly pleasant. I'm interested to see if and how other breweries will respond to this broadside. Only time will tell, I suppose...

Start The Future from Brouwerij 't Koelschip
Beer rating: 1.4 out of 5 with 2 ratings