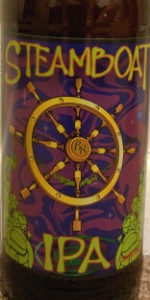 Notes: The balance between a sweet, malt backbone and a huge addition of Citra hops yields a tropical, flavorful, deep-golden brew that is anything but bitter.
View: Beers | Place Reviews
Reviews: 11 | Ratings: 65 | Log in to view all ratings and sort
Reviews by Nowlansavage11:

Decent starting head, about three-fingers thick. This forms a very nice dome brimming over the rim of the glass. Looking at the bottle, I note what appears to be crystalized malt sugar under the cap. The bottle is also sticky. I can't help but wonder if the beer overflowed during the bottling process. Ample 3D lacing on the glass. The liquid is hazy with a dirty gold color.

This beer has a pleasant balanced smell of caramel malt (not sweet) and floral hop.

Traditional Pale Ale flavors with perhaps a greater nod to the hop bitterness. The malt starts off dry with a bit of toast to the tongue. The hop bitterness is straightforward and quick to appear in the tasting. The malt reminds me of the British IPA version, while the black pepper bitterness reminds me of the original offerings when micros in America went IPA crazy. The body is solid with ample carbonation. The lingering aftertaste is mostly bitter but there is a touch of earth and smoke which makes it interesting.

Poured from a 12 oz bottle into a Dogfish Head tulip.

S: Citrusy and floral. A bit of tropical fruits.

T/F: Malty and rich to start... giving way to a citrus/fruit hop profile. Grapefruit and mango... with a bit of peppercorn at the finish. Sticky mouthfeel... resinous.... and finishes dry.

O: A very solid IPA, with a great citrus/fruit hop profile. Easy to drink and could easily do a few of this one. Nice indeed!

A: The beer is quite hazy yellowish amber in color. It poured with a finger high off white head that settled down but has good retention properties, consistently leaving a short head covering the surface and lots of thick lacing down the sides of the glass.
S: Moderate aromas of caramel malts are present in the nose along with strong notes of citrusy and tropical fruit hops along with some hints of pine. As the beer warms up, aromas of mango and papaya become more prominent.
T: The taste closely follows the smell, starting off with flavors of citrus and tropical fruit hops—mango and papaya stand out in particular—and finishing with hints of piney hops, all the while supported by strong underlying notes of caramel malts. There is a moderate to strong amount of bitterness.
M: It feels medium-bodied and rather crisp on the palate with a moderate amount of carbonation.
O: This is an interesting IPA - it's like an old school version with the strong dose of caramel malts but has some interesting aromas and flavors from the Citra hops.

A- light copper color with half finger frothy head. lacing on the pint. Clear and opaque

S- citrus and pineapple dominate the nose. there are also faint hints of mango and papaya.

F- citrus hops and mango come through more in the mouth. the papaya and pineapple are secondary if at all

M- hoppy and dry. Light bodied and quite citrusy. the hops become too bitter after a few takes.

O- not a bad IPA but have had much better certainly. worth a try

Bends heavy towards tropical fruit and pith, hitting on flavours papaya, guava, pineapple, and even a hint of lychee. I'm surprised Citra was used given the absence of overt orange flesh & peel as well as the tropical emphasis. Pale malts keep it relatively well-balanced.

It's a nice little IPA that drinks a bit more assertive than its modest 6.2% ABV might suggest, but the hop profile isn't my favourite and Citra isn't particularly well showcased. It's nice to see a brewery going with a more traditional hop regimen instead of chasing Kiwi hops or putting in a giant order for Mosaic or Azacca, but the result isn't on par with the best classically hopped IPAs, and while I'll enjoy finishing the 3 bottles I got (hat tip to Schlimenhaumer for the gift!), I can't say it's on par with Racer 5, Lagunitas IPA, Deschutes Fresh Squeezed, or the like.