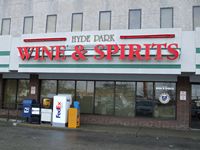 What a mess! But that adds to the charm. Cramped beer aisle that spills out into adjacent floor space that demands time to properly peruse. Lots of fresh cans of Rhinegeist and Mad Tree with a big selection of the Frog. There's Alesmith and a wide selection of West and Midwest brews to be found but a lot of it is very dated. Keep your eyes peeled for good stuff and old stuff. Oh - and watch out for the mess.

This is my go to place in cincy due to location. Good? well no, it's truly a mess and if you want the best you'll have to dig. The place is truly a mess, way too small for the amount of product.

That said friendly staff, even if annoying at times. They get a decent amount of volume. A large selection and good to go.

Went to check it out after seeing the good reviews. The place is a mess, I wouldn't go there to buy any fresh IPAs. Solid selection but you really need to dig around to find anything.

Good selection of the beers unavailable in Kentucky. Several hard to find options including bombers from The Bruery, Mikkeller, Jackie O's "one of's", limited Ballast Point, Three Floyds, AleSmith, and a pretty substantial selection of sours/lambics. They also offer a variety of individual 12 oz. bottles you can mix & match allowing customers to try a variety of beers without purchasing 6-packs. Gets kind of busy and the cold beer selection is limited, but overall a very good store.

Typically have a good selection even if you had to dig through to find it. The place if very cluttered sort of like walking through an old antique store. The folks behind the counter are quite friendly but no where near knowledgeable beer experts. They typically get limited releases and limit them appropriately. If they could better organize their stock it would make it a much more enjoyable shopping experience.

Easy to miss liquor/beer store in a strip mall. Also easy to write off/dismiss if just driving past. However, very large selection of bottles (both bomber and six packs), and they often get in rare bottles (that tend to go quickly). They also allow you to pull singles from six packs, which is great! Definitely the best part of this place. Staff is friendly and always willing to help you out, but not terribly beer knowledgeable.

Stopped into this store last week and was quite impressed. Its a smaller store and everything seems to be shoved into wherever they can find room for it. I am a big fan of shopping for make your own six pack beers and they have a great selection. The other thing that makes this a really cool place is that they just stock all the beer down the aisle and you can grab a single from any of them or grab a sixer if you want one. Walked out with a six around 14 bucks which I thought was reasonable compared to everywhere else I have been. Stop in if you haven't been you'll be glad you did.

This is among my favorite beer-shopping haunts in the Cincinnati Metro area. It's not particularly much to look at, just a somewhat cramped bottle shop that sells a little of everything in the way of spirits, but their craft beer selection is definitely well above average.

Their selection of imports is excellent, especially Belgians and British selections, but they also carry a pretty good range of German stuff. Their range of American craft brews is pretty solid, at least as far as the major breweries, but of course they have the same limitations as anyone else in terms of ability to get regional stuff. For example, Three Floyds Brewing Co. is situated just one state over, but it's very hard to get their beers here in southwest Ohio. Pop across the state line to Aurora, Indiana and a veritable cornucopia of Three Floyds awaits you at a place like the Pour House. Such are the vagaries of brewers' distribution networks.

Probably my favorite feature of Hyde Park Wine & Spirits is their total openness to allowing us to cherry-pick singles from four and six-packs to sample before buying larger quantities. The only downside, but an understandable one, is that per-bottle prices tend to be a little higher on such purchases, so if you put together a mixed six of singles you can expect to pay a bit more overall, but not a huge amount. Overall a great beer shop in my neck of the woods.

Its a little cramped but considering they have a very nice selection it works just fine. In fact it makes it more interesting to shop . Right past the cash registers they have a nice selection of the newest beers in the store. Staff is friendly and helpful. Selection is good, and its nice you can purchase an individual bottle or can out of any four or six pack. Its my go to store, I consistently find something new to try, and always have my old favorites.

Good alternative place to stop on the way up north now that Liquor Barn is off my list.

There was not much room to the beer section, but they totally filled the space they had with solid stuff.

Being from TN, it was really nice to see Jolly Pumpkin 750s of most of their offerings.

I also was able to buy some 12oz beers I have wanted to try but not put down the $$ for a 6 pack.

I did not see anything super rare, but I really was not looking for shelf walez this time.

I will be stopping here and or at Palmer's from now on. ( I need to rate Palmers, should have done that a long time ago. )

Finding beer in Cincinnati is a pain. I wanted to try this place last year when we went to our convention, but we didn't have a car. I had one this year and it is about 6 miles north of downtown. One of those State owned deals, they had a pretty good selection of Mid West beers and a ton of CA beers too! They let you mix and match 12 oz beers and that is key if you want to review a whole bunch of different beers. I wish they had more rare stuff but they served a great purpose. I will probably be going to them again next year when I am in town.

Hyde Park Wine & Spirits is a hit with us because they allow make-your-own 6'ers. Not a lot of places in our area allow for this and with their selection this makes for a great place to go for a variety pack. Especially for people like us who rarely finish a 6 pack before buying something new.

HPW&S doesnt always have many limited releases but its a safe bet that you will find Founders, Bells, Dogfish, and some of the other great breweries.

This is a liquor store as much as anything else and where its located expect to see a mixed crowd when you go. This is really why I nicked it a bit on the vibe.The beer is all on the left front side of the store and only a couple of the employees are pretty knowledgeable about what they offer and whats good (beerwise).

Oh and while you are there... swing by next door and get some of the best fried chicken in the city from Hitching Post!

One full aisle of beer does not seem like much but it is when they pack them in! It never seems to be too crowded which is good when you want to take your time and really browse. Sometimes it feels like your finding Waldo as you walk down the narrow aisle but take your time and you'll find what you need. If you need a hand the friendly staff are good at helping, but some deffinitely know more about beers then the others. I've gone digging here a couple of times with some success at finding some vintage brews.

Great selection of local, national and international beers as well!

A very very full single beer aisle in a store mostly dedicated to liquor and wine. Despite only having one aisle of beer it is PACKED! So much to choose from. Every brewery available in Ohio is there and almost always in stock. They always get plenty of the new releases and tough to find beers. Fairly high traffic so things don't stick around long but for the right person sometimes things can be held in the back. Occasionally vintage stuff will be pulled out of their cellar and make its way onto the shelves for a reasonable price as well which is nice