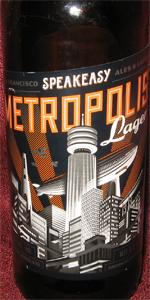 Well, the can is all nice and stuff like, well, the can of the girl in front of me in my bikram yoga class. Lolz, nah… Raul is foolin’, he doesn’t do that dumb stuff. On the real though, the can is pleasant on the eye like Fritz Lang directing a silent. And then when your boy took a sip, well, hot damn - it’s not all that bad. A hop forward Rice Lager is a bit weird, but so was this one chick I met during a late Brooklyn night - and at the time I was feeling it. Ok, either way, I’m out.

this was poured into a pilsener glass. The appearance was a hazy bronzed to golden color. A one and a half finger white foamy head started and dissipated fairly quickly. Spotty lacing clung in a semi-bubbly manner. Carbonation was seen rising at a decent pace. The smell had a sweet grassy hop bleeding into light bready/biscuit malts. The taste copied the smell lending a hand to a sweet stickiness rolling into the aftertaste and finish. On the palate, this one sat about a light to medium on the body with a nice sessionable grassy feel over my tongue. Overall, pretty nice India pale lager worthy of coming back to.

L: Pours a gold color with hints of dark orange, has a nice fizzy medium sized head that dissipates pretty quickly, leaving a small patch of white on top of the beer. Beer is a little hazy but has nice sheets of lacing all around the glass.

S: Sweet orange, some orange rind, notes of floral and weedy hops, with a toasted grain and slight bit of caramel in the background.

T: Sweet orange, with notes of bitter orange rind, intermixed with some floral hops that taste a little weedy and earthy too, finishes with notes of toasted grain and caramel, and a fairly strong bitterness. I wish the bitterness was toned down a bit and the hops tasted a little less like weeds. The bitterness does coat the tongue.

F: Light body but not quite as crisp as I was hoping.

O: This is a very hoppy lager if you like hoppy lagers this one is for you, but I was hoping for something a little more balanced.

lil too hoppy for my taste in lager

From an undated bottle. Pours a golden color with two fingers of fluffy white head. Smells of grass and dry hops. Light feel due to the carbonation. Starts with crisp lager taste, finishes with mild hop bitterness. Not a huge fan of lagers, but this is good for the style.

Nice and hoppy, not heavy

Clear golden color with off-white head. Aroma is slightly malty, slightly hoppy, seems very balanced. Taste is also balanced, first you get the malts, a bit of caramel and bread crust and gets bitter on the finish. Body is medium and well carbonated. Really well made, easy to drink, crisp lager.

Couple fingers of bubbly froth for a head, dissipates with ease due in large part to larger bubble sizes, white in color, the lacing has minimal stickiness and just falls back into said froth. The liquid has a soft gauzy quality, bright amber orange with active bubble beads. Crisp nose, salty and peppery both, dark bread crust notes, dry hop herbaceousness and a hint of dried citrus peels, you can tease out more maltiness over time, what is has is the good kind of dank. Medium-bodied, the carbonation has it foaming up in the mouth from the second it hits the tongue, too dry for creaminess but not really prickly either. More distinct orange citrus here, evokes tea leaf flavors. Bitter hops, green leafiness, unprocessed dark grains and asphalt, road dirt. Not to say the beer is unclean, more rugged in an old fashioned sort of way. Light white pit fruit nuances towards the finish, where it does unclench enough so that the palate can relax. Can’t call it an easy drinker, a bit more challenging than what might be expected of a lager.

You can tell by the color that is is orangey and sweeter than the average lager. All the hoppy lagers look orange to me even the ones that are hoppy by accident I think. Pour is golden amber with a fat white head that is rocky adn very slow to fall. Slight haze from dry hopping. This one uses saphir and mosaic. A few bubbles can be seen rising to the top. Scent is a low malty aroma with a light orangey citrus and lots fo spice. The beer is not fresh because the orange is terribly faint and smells like orange seeds actually and the remnants of the hops are spice and not fruity. The spice catty and very prominent. They offer an almost oniony scent. Taste is spicy from hops. Not so orange like as I am sure the brewer wanted because the dry hopping has faded. The choice as to which hops are important to the idea of dry hopping the lager. They made some good choices but that saphir is catty too as it's left there in the wake of the fruitiness. It's not a strong onion flavor but it's the beginnings of it. No diacetyl, no dms. No carbonic bite either. Soft, wet, sweet albeit mild flavor with hop spice dominant.

All in all not terrible even thought the hops have faded but dry hopping the lager for bottling does not seem like the best idea to me and if it is ill conceived then this brewer has done the best job in choosing the hops that would fade well and leave the lager behind. That's the intention I perceived anyway.

Poured from a 12 OZ bottle into a pint glass. The beer has a very bright clear amber color with a small white head. The aroma is a nice blend of malt, citrus and hops. The flavor is a mildly bitter mix of malt, citrus and a hop backdrop. Overall, I found this to be a very pleasing beer, very good.

I am not a lager person. This beer is a good drinkable lager, lots of taste.

This was poured into a pilsener glass.
The appearance was a nice looking golden color with a one to maybe closer to two finger white fluffy head that dissipated gently leaving semi-thick messy lacing clinging to the glass.
The smell started off with a sweet herbal to clingy citrusy zest rolling over subtle sweet grassy notes.
The taste followed the smell pretty much spot on and giving a nice crisp spice to slide into the aftertaste and leave a nice subtle wet finish.
The mouthfeel sat about a light on the body with a nice sessionable smooth yet clingy spiciness bringing it all together. I like the bitterness in the feel that's nice too.
Overall, is this what they're calling these IPL's these days, yeah, I'd have this again, good stuff!

Once more, I could weep for what I missed. I was stationed in Alameda, in S.F.'s East Bay from June 1987 to October 1989 and it was the best two-and-a-half years of my life. That said, imagine how much better it would have been if 21st Amendment and Speakeasy had existed! Granted, Berkeley had Triple Rock and S.F. had Anchor and I was aware of both, frequenting the former and imbibing of the latter. I love Speakeasy's graphics and when they begin CANning, I will return to each and every one of their beers.

From the bottle: "Legit Since 1997"; "Welcome to Metropolis"; "American Craft Lager"; "Consthe ructed with meticulously kilned malts and highlighted with bales of hops from around the world, METROPOLIS (tm) is a towering, crisp American lager that embraces tradition but signals the future."; "Independently Owned & Operated".

The shifty, suspicious eyes looking out at me from the label were beginning to make me nervous, so after I Pop!ped the cap, I gave it an aggro pour so that I could put it somewhere so as to avert its gaze. I kept hearing the narrator in "Alphaville" - "Welcome to Alphaville!" Gah! Having produced three-plus fingers of rocky, tawny head, I watched it slowly fall, like it had been blackjacked from behind. Speaking of which, my former moll, Scarlett, clacked up behind me in her trademark stilettos. She did me dirty with Big Daddy and Double Daddy, but that head of flaming-red hair just gets me every time. She stood by as I held this Amber colored (SRM = > 7, < 9) with NE-quality clarity up to the light. She threw her head back and laughed as I brought it up to my nose for a sniff. She wears a light perfume, but I want her to throw some hops in her atomizer. This had a grassy hoppiness along with a biscuity maltiness. Mmm. Mouthfeel was medium-to-full, big for a lager. The taste was much more bitter than the nose had led me to expect! The aforementioned "bales of hops" had not been wasted and Scarlett leaned in and kissed me deeply. A kiss of the hops, indeed! More like a French kiss. I was put in mind of a Czech Pils as Scarlett sat on my lap and took a drink from my glass. This is a share-worthy beer. We took turns drinking it as we gazed into one another's eyes. Yeah, I was back in Metropolis and dilly-dallying with the doll that had nearly gotten me killed, but somehow, I just did not care. I cared about the finish, which was very dry, thank you. It lingered with the taste of fresh-mown grass and I found myself reaching for my asthma inhaler.