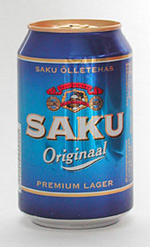 Notes:
View: Beers
Reviews: 47 | Ratings: 88 | Log in to view all ratings and sort
Reviews by biegaman:

Saku Originaal is spelled with an extra 'a' and it's appearance has an extra bit of colour in its tone; this lager is more golden than yellow and that bodes well for a beer that was initially expected to have little to no flavour. Turns out instead, it has little to no head (this despite the fact that its bubbles - to no ado obviously - continuously try to revitalize the surface).

One tiny whiff of the aroma sent my head sailing back at breakneck speed (fortunately my computer chair is padded). It's putrid. I can picture a giant vat of processed corn syrup sitting somewhere in Iowa; if you're going to use adjuncts, fine, but have some pride, do something to disguise it. Please. This is not going to entice anybody to drink.

Served properly chilled, the corn taste is moderated by an appreciable maltiness but, the second ambient temperature begins to break through, the corn goes from 'loose cannon' to 'army of destruction'. It is a cloyingly sweet and synthetic flavour that saturates the tongue in a corny syrup that is slightly more disagreeable than it is insipid.

I always become (understandably) skeptical when the beer's label goes out of its way to boldly state the beer contains barley malt. I just assume it does... it is beer, right? Perhaps it's made so clear on the can because it's so equivocal on the palate. There isn't an ounce of bready, grainy texture or taste, but rather, a watery, toneless blandness.

When this Estonian brewery began operations in 1820 I guarantee they weren't making beers like this. This is insipid, shoddy and paltry at best, borderline unpalatable at worse. It's a shame that Estonia couldn't export something more distinctive and reflective of its gastronomy or culture as oppose to another ubiquitous, trite, emasculated lager.