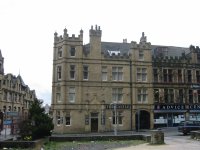 I spent many weekends drinking Real Ale & eating Curries in Bradford. It is still one of the best places in Yorkshire for beer hunting & Pub-Crawling, with its plethora of characterful historic Pubs. It has an excellent mix of old established Beer Bars & new ones. The Castle Hotel was considered one such newbie years ago, but after nearly 10 years in its new guise, it is now firmly entrenched in the former camp. A staple stop on any Pub-Crawl of Bradfords licensed establishments.

Built in 1898, it has an imposing stone frontage, which has recently been sandblasted clean, removing a century of grime & carbon deposits, now revealing a very attractive exterior. A castellated battlement at its corner, gives the Pub its name  I always imagine John Cleese leaning over the top of the building & saying I fart in your general direction, in his inimitable Frenchie accent from the Monty Python Quest for the Holy Grail film.

It was, in a former life, a Samuel Websters house, but this Brewery has long been closed  & the Castle Hotel is now a genuine Free-House. Entered from one of two doors, they both whisk the punter into a large one room Pub that has the Bar set against the back wall. Having upto 8 Real Ales at any time, it usually offers one of the better selections of Ales in the City Centre, often frequented by visiting beer geeks & CAMRA members, as well as locals. Regular beers include a selection from; Banks Bitter (well priced), Barnsley Bitter, Timothy Taylors Landlord (always excellent), Marston Pedigree, Fullers ESB & a rotating offering from the recently (2001) opened local Salamander Brewery. The other Guest beers that fill the vacant Handpumps often include a Mild & a Porter, as well as rare offerings from the four corners of the United Kingdom.

Sadly, it does not serve food, which is strange considering that this is a Hotel! Of course, there are so many well-priced Curry Houses in Bradford, that doing food is often pointless. If you are contemplating staying in Bradford, this is an excellent place to stay though. £27 ($40) gets you a Single room with en-suite bathroom for the night; £37 ($60) gets you a Double. A great place to make your base for a Real-Ale ramble of West Yorkshire.

Bradford CAMRA Pub of the Year in 1995, it is a favorite with many of my friends. Only a 5 minute uphill walk from the Bradford Interchange, maybe less from Bradfords other Railway Station, Forster Square.

Well worth a visit & Highly Recommended.

Castle Hotel in Bradford, GB2, United Kingdom
Place rating: 3.94 out of 5 with 1 ratings