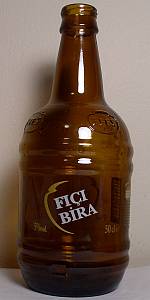 Notes:
View: Beers
Reviews: 14 | Ratings: 43 | Log in to view all ratings and sort
Reviews by iloveanarchy:

Hand-delivered from Istanbul to Moscow by my boss (thanks, Jim!), the brown half liter bottle is stout like a keg, with a short neck coming out the top. The label is deminimus - clear with yellow print stating "Fici Bira" ("draft beer") and a yellow line forming the leading edge of a bird in flight to the left of the letters. A Turkish friend assured me this is different from the regular Efes Pilsener just as MGD is different from Miller High Life. OK. All of the writing is in Turkish, but I'm told the ingredients conform to the purity law. No freshness date.

Pours a clear slightly yellow gold under a 1.5 finger white head that fades pretty quickly to film and collar. No lace. The nose is pretty pleasant, of sweet bready grain. The mouth is a very standard light and well-carbonated. Smooth, pretty standard lager taste here - sweet barley, slight floral hops bitter. The bad news is a soapy undertown, fleeting but disturbing. The aftertaste is mild, mainly dry and not particularly long-lasting. It's OK, but not much more than that.

Don't care for this so much. Poured with a big thick foamy frothy head. Very pale yellow color. Some lace. Skunky aroma. Funky, sweet, wet cardboard, chemical flavor. Too much body for the style. Little undercarbonated. Neutral sweet finish. Won't be having another.

Appearance- Pours a clear, pale yellow gold under a decent white head w&#305;th no stay&#305;ng power. No lace at all.

Aroma- Not quite as good as a German P&#305;lsner should be, but the nose is descent. Decent malt sweetness w&#305;th a touch of hops. Some bready aromas &#305;n there. Not great, but noth&#305;ng overly objectionalble.

Taste- Pretty standard pilsner taste. Decent blend of malt sweetness and b&#305;tter&#305;ng hops. Something else that shouldn't be there, but &#304; really can't put my finger on it. Soapy, or wet cardboard? Whatever it is, it ain't supposed to be there.

Mouth-feel: Pretty standard pils for body, but a ha&#305;r under-carbonated.

Drinkability: It's not wretched, but stick with the Efe Pils.

A: Pours a very pale yellow hue with a tall fizzy white head. Okay retention with no real lace.

S: Simple aromas of sweet grainy malt with a hint of grassy hops.

T: Nice sweet bready malt, light hints of corn. A touch of grassy hops but not quite as much as the regular version.

M: Light in body, so so carbonation.

D: Okay but there are better Efes in Turkey.

As mentioned by others this comes in a neat barrel type shaped bottle (half-litre and a twist top).

I poured mine into a pint handled glass on the balcony of my holiday hotel in Ovacik (turkey).

It looked fine, true Med lager, golden, bright and clean. The white head (as usual with Med lagers) soon faded away to a thin collar and nothing else.

I thought this a bit sweeter than the Efes Pilsner I'm used too, and therefore better (I have a semi-sweet tooth).

Not bad at all and definately a different beer to the normal Efes pilsner.

Not as good as the regular Efes pilsner. Head and smell both disappeared quickly--my initial impression was relatively malty and bready but that disappeared to be replaced by a faint hop smell.

Very standard pilsner taste and pilsner hops with a hugely chemical undertone, an overly-carbonated mouthfeel, and a soapy aftertaste. I'm not sure this one would pass the purity law.

Modest head, very crisp and clean, altogether better than average euro swill. More of a German flavor but not really a Pilsener. Hops are restrained but tasty-- floral, citrus. Definite bitter aftertaste and quite refreshing. Nice body and mouthfeel for a light beer.

A - Pours an apple juice like colour with medium carbonation and a thin film of white 'head'. Bright.

S - Grassy hops with some straw/grain aromas and some sweet malt.

T - Typical Euro lager sorta taste. Not too sweet which is nice but it's not overly tasty. I got some faint hops and sweet malt and that's about it. Not too interesting. Tastes kinda like apple juice.

D - Not particularily interesting. Not something I would look for. The bottle was what got me to be honest but I won't be finishing half of it. Just not worth the effort. Not as bad as some Euro lagers but still not really that interesting.

Pours a light fizzy yellow under a thick frothy head the quickly disappears leaving no traces.

somewhat smooth with medium carbonation, fizzy, but a hard to place slightly off feeling.

Not impressed at all. Probably will not have one again.

Served cold. Side-poured with standard vigor as no carbonation problems are expected.

HEAD: It's a half-finger wide. Recedes fully within 10 seconds, leaving no lacing and no opportunity for me to note its characteristics, other than that it's white.

BODY: Clear translucent yellow-copper of average vibrance. Honey coloured, if you will. Clean; no yeast particulate or hop sediment is visible.

A pleasantly sweet aroma of mild strength, with no detectable hop character, yeast, or alcohol. I'm looking forward to trying it.

TASTE: Honey, barrel/wood sugars, helles malts, pils malts, honey malt sweetness, and faint pollen-y hop notes. It's balanced, albeit simple, and has a nice rounded flavour profile with plenty of cohesion. There are hints of sassafras which lend it interesting nuance and help it stand out compared to other pilsners.

Not a gestalt build, but a pleasant one. There isn't much intricacy or subtlety here, and it has only an average depth of flavour, but it's enjoyable to drink the plain honey-dominant flavour is nice. Average duration and intensity of flavour.

This texture suits the taste well. Nice presence on the palate overall.

OVERALL: It's a nice pilsner with an interesting honey emphasis. I like it and would consider getting it again. One of the more interesting Turkish brews I've tried so far. It isn't boring like many beers in the style. Highly drinkable. Definitely above average.

Light golden straw, clear with a two-finger sized white head with good retention and some lacing left on glass.

Very skunky with tonnes of corn & even more grain. Some grassy hops but not a lot showing because of the grain.

Quite sweet and malty tasting with some hops. Tonnes of grain again & some corn. Not enjoyable.

Not great in any area other than the appearance. One to avoid unless you've tried everything else on offer, and even this it probably isn't worth your while.

Hoppy with a slight metallic taste.

This is a pretty typical central/eastern European style pilsner. Nothing stands out about it, but it has decent drinkability.

Efes pilsener draft that i drinked was made in Zajecar brewery,which is under Heineken group. Original from Turkey is slightly better.

A: a pale yellow color,nothing special