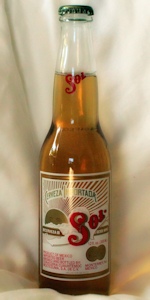 Notes: Born in the heart of Mexico in 1899, Sol is a bright and refreshing lager.
It’s inspired by the sun and brewed to shine just like those who drink it. The ones that radiate good vibes, that lighten the mood and always look at life on the bright side. The ones who not only shine, but shine their way.
View: More Beers
Recent ratings and reviews. | Log in to view more ratings + sorting options.

Rated by Helvoslup from Germany

Reviewed by xmanden from Michigan

Reviewed by Caldwan123 from Iowa

On the pour, fizzy looking bubbles come together to make a one finger head that quickly dissipates to a surprisingly fine covering over the top of the beer. The body is a light gold with lots of carbonation and some very light lacing.

Smell is very light and almost not there, bit what I can pick up is just corny malts and some skunked hops from the clear bottle. At least it's clean apart from being light struck.

Taste is a bit of a let down. Once again very light. Right on the very first sip there is a hit of bitterness that implies hops but that quickly fades as you drink and get used to it. There is a certain minerality and tartness as well that lingers until the malts fully take over about halfway into the sip. The hops don't taste fresh at all and are only providing bitterness and grass flavors. One again very clean with almost no yeast notes.

Feel is actually decent being very drinkable and has some actual body to it although it is still very light once you get past the carbonation and head stage of the sip. The finish isn't as short as I would've expected for a beer this light amd it leaves you feeling malty and a bit boozy for a decent while after your sip.

Overall it's alright. You can do better from Mexico, but it's about on par with all the other clear bottles that come from down there. Victoria and Tecate are both better and Tecate is the same style too.

Reviewed by jonmikel from Spain

L: clear pale yellow an some gold. On top, a thin head of white foam about 2 cm. tall; good collar and lacing

T: more grain than bread malt. It has a lingering peach aftertaste that is good; no major hop in the brew.

F: light with a small amount of big-bubbled carbonation. After a while, it comes off as heavier than a lightweight.

O: a light brew. I like it. Usual Mexican beer.

Reviewed by Premo88 from Texas

T: more grain than bread malt but the same notes from the nose are here in the flavor; it has a lingering peach kolache aftertaste that's nice; no major hop presence but there is a light earthy/black pepper note that flashes

F: light and fluffy with a small amount of big-bubbled carbonation ... it's almost flat by macro-brew standards but it's not flat, plenty of prickle in the development toward the finish; over time it comes off as heavier than a lightweight, maybe a light-middleweight

O: nice adjunct lager with more malt presence than most American versions; super easy to drink and in big mouthfuls; if the ABV were 3.5 instead of 4.5%, it might be perfect

Reviewed by Tony787 from Canada (ON)

3.58/5  rDev +44.4%
look: 3.5 | smell: 3.5 | taste: 3.5 | feel: 3.75 | overall: 3.75
I bought a can at the beer store in Ontario 473ml at 4.5%. clear golden color with good carbonation.
Poured a 1finger head glass that disappeared but leaving as lace as you drink it .
My can is not from Mexico it was brewed by Molson Coors In Canada.
So maybe there will be a difference from the original beer.
The beer taste very light not much bitterness and just a plain malty hint of lemon taste .
Very easy to drink thought it was gonna be crappy beer but it's actually ok and an average beer to drink .
Maybe Molson Coors did the better job brewing this beer then the original from Mexico.
Canada has better water I think .
Cheers

Reviewed by Nath91 from Australia

1.97/5  rDev -20.6%
look: 1.5 | smell: 2 | taste: 2 | feel: 2 | overall: 2
Sol Cerveza is one of those Corona knockoffs that seem to be popping up left and right in an attempt to gain a foothold in the light easy drinking, adjunct lager category. You know going in this isn't a beer that's for connoisseurs, and is only there to fulfill a market of people who either don't drink beer or people just wanting to knock back a seemingless endless supply of liquid in the hope it gets them drunk and not bloated. This 650ml long neck of Mexican beer, is apparently imported from the Netherlands into Australia, for Pinnacle Drinks which is basically Woolworths alcohol importer. Isn't globalisation great?!

Look: Poured into a pint glass. Extremely carbonated. Hundreds if not thousands of bubbles surround the interior of the glass, and plenty racing their way to the surface in search of freedom or a better life than my stomach. Bubbly white head that disappears before you know it. Head look promising, but non existent after 30 seconds, giving an appearance of golden soda water. Straw gold, completely filtered can see right through the glass. Standard adjunct lager look to it, nothing to write home about. The head dissipating in seconds, is disappointing.

Feel: Highly carbonated, thin body , slight dry finish. Highly drinkable if you're just wanting to knock these back without tasting anything.

Overall: I'm not knocking it because I don't think it's good. i'm knocking it, because unless I'm lying on a tropical beach somewhere for it to quench a thirst, it's not doing anything for me. Outside of a hot environment where you're relaxing and just drinking for a buzz, it's not worth the effort and the carbs. It's a summer beach beer that'll help get the taste of salt water or chlorine (if you're in a pool) out of your mouth. Nothing more, nothing less.