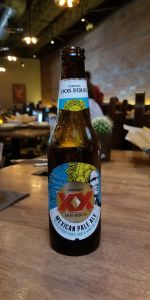 Pours a brilliant amber. Thick head and strong retention. Excellent lacing. Low carbonation. Smells of malt and biscuits. Campfire. Habenero pepper. On the nose strong smoke and pepper. Rauchbier like with Habenero salsa. Midpalette full of pableno pepper. Smoke and roast. Brilliant back palette of pepper and malt. Burning hot sauce. Lingering smoke and malt. Tannins. Cigar and Bourbon like. Excellent. Decisive but excellent. For those who love fire and smoke. This is it.

Surprisingly, this beer is enjoyable. Whatever spice they use is great. It adds heat and spice while complementing the citrus and hops. Earthy, floral, zesty. I dig it.

Bought a sixer of these to try out. It poured a medium brownish color and a medium white head, could smell a lot of citrus. Tasted nice enough however the flavor profile of the citrus hops as well as the inconsistent spicy aftertaste varies from beer to beer.

The can was not shaken but exploded with overflowing foam that made a huge mess.

Also other reviews say this is clear / filtered. This is not remotely clear. It's so hazy it's almost opaque.

smells like soy sauce, possibly infected. not even going to risk it.

Looks medium copper/brown with an off white head.
Smell is caramel malt with some citrus hops.
Taste is malt forward followed by mildly citrus hops. There’s some spiciness from the cayenne on the backend. It’s hot but not overpowering.
It has a medium mouthfeel and a semi dry finish.

Notes via stream of consciousness: So this one's a little bit of a curve ball, a "Mexican" pale ale with citrusy hops and a hint of heat. Where does the heat come from? It sounds interesting, but geez, that's a little odd. I guess Cervecería Cuauhtémoc Moctezuma sees what's going on and is making a grab for a little bit of the market, or maybe they're just testing the waters. Why not? So let's see... it's darker than I though it would be (clear dark copper) and it reminds me of Dos Equis. I wonder if it's the same base beer. The aroma is also similar to Dos Equis, and yet at the same time very unique. I've never smelled a beer like this one. It's floral and fruity and citrusy. It's also fairly bright - I've had IPAs that weren't as strong in their aroma. On to the flavor... WHOAH! That's weird. It's got caramelish and lightly toasty malt with a berry-like fruitiness and soft citrus backed by a touch of spice and heat that makes me think of cinnamon. Thinking more about it, the malt almost has a roasted malt edge to it. I've definitely never had a beer that tastes like this either. As I'm waiting to take another sip - the aftertaste lingers for quite some time - the heat is lingering and tingling on my lips. OK, let me try again... I got more of the citrus this time, and I'm finding it a bit like lime. The heat is still there, and although I wouldn't call it too much, it's definitely not just "a hint of heat" as the label suggests. The head has dropped now but it's still holding a mostly solid surface covering and there's some nice lacing left behind. The maltiness is pleasant, as is the berry-like note, but I find the lime a little odd. A median bitterness and the heat give it a dry finish with some of the dark caramel and almost roasty-edged malt and cinnamon-like heat lingering. In the mouth it's medium bodied and crisp. What I find odd about this beer, other than it's intrinsic oddness, is that it's not particularly well balanced. It seems very jagged with the malt coming forward, followed by the fruitiness, and then the heat. It seems spiky for lack of a better word. under that umbrella it does kind of come together in balance, but that's not the kind of balance that you usually find in a beer. The heat is another issue given that it lingers, and again, I'd certainly call it more than just "a hint of heat"; it's actually quite obvious and powerful, and in my opinion, over-done. I give it credit for uniqueness but in the end that doesn't make up for its lack of balance.
Review #6,789

Poured from a brown 12 oz. bottle. Has a dark brown color with a 1/2 inch head. Smell is of citrus, some malts. Taste is citrus, hot pepper is making it's presence felt, light malts. Feels medium bodied in the mouth and overall is a unique take on the style and a pretty good beer.

At the end this beer has a spicey floral component to the flavor, which allegedly are Fire Ant Tear drops. It goes very well with Salsa.

Taste: It is a Pale Ale with a piney hop flavor at the end but also a peppery spicey flavor.

Has a nice red amber color and thin head. Nice light hop aroma. It's different with the heat on the back end but it's a tad sweet and pretty good. It has a bite with the heat and it adds some zest. It's a good beer. Paired with food and some tequila or mezcal? PARTY!!!

I love this beer. I was lucky enough to try it at Buffalo Wild Wings. I love that the heat kicks at the end. The beer itself is very smooth with its hoppiness and it is refreshing so great on a hot day.

TASTE: There's a bit of chile-like vinegary heat in this, which isn't as unwelcome as it might sound given how mild it is. Pale malt/2-row malted barley sweetness balances out the mellow bitterness of the mild hop regimen. Floral and a bit citrusy, sure, but these flavours aren't big or bold. Hop pungency is quite low...this is definitely less hop forward than Sierra Nevada Pale Ale, for example.

OVERALL: It's an easy drinking pale ale with a bit of spiciness. I guess they had to do something vaguely Mexican to it to stay on-brand. I wouldn't buy this over Sierra Nevada's Pale Ale, which is likely available in every market this is. A forgettable but enjoyable pale ale that won't have discerning drinkers waxing effusive, but maybe it'll be a stepping stone beer into bolder pale ales for casual beer drinkers unaccustomed to the aggressive hop profiles of many a modern ale.

On draught at Buffalo Wild Wings.

Pours a clear amber with an inch of foam, excellent lacing.

The taste is of veggies, sweet in a kinda sickly way, light hoppiness, some heat from the peppers during and after the swallow.

Yay I'll say when I finish my glass.

Did not expect it to be so damn good. The hoppiness is right on and it goes down smooth. I really love the heat at the end. I cant get enough but theres the problem. Its only available at a few select restaurant bars. I have found it at BWW and Hooters in my area. Cant wait until its sold in stores.

I expected the worst and maybe that's why I rated so high. This is not a California or English style pale. its original, and has a quality hoppyness which all big mexican beers lack. this beer has a nice head and a rich color, its very drinkable with a well balanced hoppy flavor...but wait !! there's a surprise, what's happening..... no way there's fire at the end . just try it..