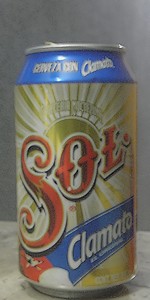 I like this one and have enjoyed varieties of tomato juice and beer for-ever. These go down fast. I like them good. I’m going to try it mixed with some Stoli. Cheers!

this beer tastes like watery clamato I would rather waste money on any of the Michelada style beers on the market the low 2.5 ABV is also embarrassing can this even beer considered a cerveza with abv that low.

Perfect for hangovers, very tasty, refreshing, almost like a dessert drink, foamy, spicy, very unique, very popular in Mexico, the Clam powder ingredient and garlic make it a very unique Cocktail with beer included, all in a can.

This is plain awful, horrible beer. Smells like garlic and spices. Garlic is extreme. Tastes like plain tomato juice with lot´s of garlic and onion. Beer is almost undetectable.

This is the BEST Michelada you can buy in a can!! I have not been able to get my hands on this anywhere in California. My gf brought me back a 6 pack from Mexico and it was the bomb!! I think if this was sold in California it would knock Modelo and Budwiser's version off the market!

Sol Clamato has a thin, fizzy, pink head that goes right away, a pink-red, opaque appearance, with strenuous bubble streams, some film on the sides, and no lace. This beer really crackles. Aroma is of tomato juice, lime, and lager beer. Taste is of those elements, with lots of salt and red pepper. Mouthfeel is fairly heavy, and Sol Clamato finishes like a salty and spicy V8 juice. Overall, this is probably the best of the chelada beer style I have so far tried. RJT

The first thing you need to know is that Sol clamato is not a beer per se, is more like a weird cocktail that include beer in the mix so you should judge it for what it is and not for what we expected it to be.

Clamato (also know as michelada/red eye/ red sky) is a mexican drink that include salt, lime, tomato juice (Clamato is the tomato juice brand that is usually used), maggi sauce (soy sauce), tabasco (or some other kind of hot sauce) and finally beer (usually a lager)

This preparation is extremely popular in México, actually there are many little bars that specialize in Micheladas and they only sale that (you can also buy "michelada mix" at the grocery store) so I guess that some companies realized how popular Clamatos/michelas are and saw the opportunity to make some extra coin.

Now that is clear what Sol clamato really is (and taking in consideration that I really like real clamatos) I can say without doubt that Sol clamato is the closest thing to a real clamato that you can get, it has the spicy taste, the strong tomato flavour and that salty touch that makes a good clamato. I gave it a overall score of 4, because in my opinion is too spicy so after drinking 3 of them your stomach will try to murder you from the inside.

Conclusion: Sol clamato is not for everyone, it's more like an acquired taste, but for those whom already like clamatos/micheladas will find Sol clamato surprisingly good. Finally I suggest you to give it a try if only for the "cultural aspect" of this mexican aberration/ambrosia.

Another experiment from Sol. After the lime and salt beer, now they made a beer with clamato, a tomato juice with spices.
I got this with a bunch of others and the name Clamato seemed weird, so I tried to translate it to no effect. Then I googled for it and I was staring wide eyed-mouth open at my computer's screen once I realized that Clamato is a sortof tomato juice and that thing found its way into a beer.
Anyway, let's start with the review.
Naturally, no head at all. Colour is light red-dark pink of sort, if something like that exists. Very hazy,non-transparent. Some bubbles still rising on the top, even 20 minutes after I poured it in my glass, trying to find the courage to drink it. Some dark small seeds also visible.
Aroma is of tomatoes, origano and basilicum. Smells pretty much as your typical pizza sauce would smell.
Taste follows the aroma. You can't taste the beer at all. Reasonably spicy.
Very carbonated and very thick on the body.
Alcohol is not stated on the can, but on Ratebeer they have it as 2.5%. I leave it blank and if someone can confirm it, please update it.
Overall, I am going to give it an average 3 on all categories, since is my first herbs beer and I don't have a measure of comparison.
To be honest, I didn't like it and I could only use it for cooking if I was unlucky enough to have another one.