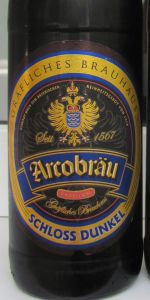 Notes:
View: Beers
Reviews: 9 | Ratings: 20 | Log in to view all ratings and sort
Reviews by wattoclone:

Appearance: The dark, copper red colored beer is served in a Shaker pint glass with a 1/4" ivory head that slowly recedes to a film over the liquid. Sipping creates scattered patches of lacing.

Smell: The aromas include dark orchard fruits and some noticeable breadiness.

Taste: The flavors are much as expected from the nose with the dark fruits (cherry, raisin, figs, plums). The sweetness from the malt is punctuated with hints of earthy spiciness.

Mouthfeel: The mouthfeel is medium bodied and lightly prickly with the persistent moderated carbonation. The medium length finish begins as the sweetness and fruit flavors start to fade to eventually leave behind only some dry earthiness from the hops.

Drinkability and overall impression: This is a reasonably good dunkel that is solid in that it touches most all of the right bases. That said I'll not be looking to have a second one since there are a one or two others I prefer, if only because they are more easily found.

First off this is a Dunkel not a Dunkleweizen. Bought in a 500 ml bottle in Korea.

A: Pours out with a deep mahogany brown, little yellowish head that dissipates quickly, and even small bubbled carbonation.

T: Rich malted barley up front and through out, earthy Tettnager hops, and grassy grains.

M: The true balance that a Dunkel Lager brings, not drying but not too wet either. You feel refreshed by its balance of bitter and sweet, dry and wet, finished with a nice watery finish. Suitable for all seasons.

Most excellent German Dunkel. Was lucky
enough to be at the Brauhaus Schmitz in Philly when they tapped this keg, first time in US I believe. The bartender suggested this beer and
gave out samples, everybody that tasted it got
one, it was that good.
Poured a rich brown color with a nice
foamy head. Taste was outstanding, caramel,
malty goodness.
Still light enough to be a good summer/session beer.
I am a big fan of the dunkels, i've had the
best, spatan, warsteiner, Ayinger,Hofbrau,
in my opinion the Arcobrau is the best of the
bunch, far better than any American dunkel.

Today’s brew comes from Moos Germany [must insert cow jokes at some point in this review] is a fine upstanding Dunkel by my new German fancy Arcobräu. Arcobräu was until recently a figment of my imagination in a municipality that is a paradise to dairy farmers and their bovine property alike with lush rolling green hills, troughs as far as the eye can see, and buckets strategically placed wherever cows are likely to stand. In fact the dairy farmers liked this place so much they named it after the noise cows make. Turns out Moos exists in reality and now I’m off to find the county of Meow on Google Earth. I will report my findings post haste.

Poured from a 500ml bottle into a fancy DAB stein.

S: A rich tapestry of aromas with caramel, macerated dark plum and figs, a touch of bread and is that a hint of banana or am I going crazy? [probably... to both] The aroma of this brew suggests a malt heavy beverage, which is totally fine by me, bring on the malts I say! 7/10.

T: Flavour is a little more subdued than expected but still tasty nonetheless with the above noted caramel/macerated dark plum and figs/bread with an odd but added note of cola, some light nuttiness and a slight metallic aftertaste. The finish is Munich dry with a hint of hops. Overall the flavour is solid if a little weak. 7/10.

M: Mid to light bodied with a medium carbonation - good for the style and good for that belching contest I was planning on entering, aka my average beer drinking session. 8/10.

D: Soooo, no major complaints with this Dunkel aside from the usual cry of “more flavour” - then again 4.7% ABV Dunkels aren’t usually flavour-bombs so one might say my opinion is slightly unjustified, but I won’t... shuddup. Also that cola taste and the metallic note detracted from my flavour score... but other than that it’s all G brah. The big question is will I have this again when I can get a Weihenstephaner or a König Ludwig for cheaper? My money is on the cheaper/better Weihenstephaner [I love those guys!]. 7/10.

TASTE: Metallic roasted malt offset by lovely dark caramel and walnut. A quality, well rounded flavour. Not overly complex but not simple either. Reminiscent of the König Ludwig Dunkel but smoother.

OVERALL: For a Dunkelweizen it's incredibly dark and strong tasting. Has a classic German flavour profile which occurs in all types of German ales and lagers. It may not take you to heaven and back but it's still very sound. I highly recommend the hefe-weisse.

S: The aroma possessed a hint of caramel malt with relatively light earthy hops and a deliciously clean lager character.

T: Medium hops and light bitterness balanced by a slight sweet finish. Light caramel tone in the after. Incredibly clean and fresh.

This beer is incredibly crisp, easy to session and delicious to boot. Can't wait to have another!!

amazing, a dark beer for the regular drinker that is brewed traditionally like a dark should be. there is finally a dark beer i can drink until the sun comes up. No aussie dark lager can compete, smooth, light, malty goodness. the bartender said the tap was 4.6% ABV, looking forward to accompanying this beer with winter food. i think this is the same beer as the arcobrau dark lager.

Ruby tinted brown with a fat finger of tan head.

Sweet malt and banana in the nose. Slightly less sweet tasting, but otherwise has a fairly similar light banana bread flavor, maybe some light caramel, with a clean finish.

Medium bodied with a creamy feel and strong carbonation.

Just a touch over-carbonated to me taste, but very refreshing overall.