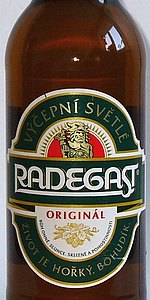 10/10 ... it’s amazing how people who don’t know anything about beer say it’s average ... bro stick to Guinness ( it’s not a beer btw ) or budlight or corona ... and don’t forgot to go to Oktoberfest . I grew up on this beer , it’s absolutely amazing , tastes great , smells like a beer ( which means AMAZING ) ... and how can people say it tastes like soya sauce ? Bro you know nothing about beer please please

The Pils is best described as MILD. That's good but not excellent. The Pils malts were well represented but the bitterness was about ½ of what I'd like to see in a Pils. I don't mind a malt-forward Pils, but it started to get boring after the 3rd or 4th sip. A 3+.

A- Clear Straw with a coarse fluffy 3 finger head, some retention, no lacing.

D- Not a bad beer, better than alot of Czech lagers, but definately not the best I've tasted.

I had this beer in my fridge for a while. Got it from a collegue who was there in the winter weher they brew this beer. Best before may the 8th 2011, oops...

Poured in my dutch beerglass the beer looks like every ordinary pilsener. Nice white head with pretty carbonation.

Nothing fancy to smell. Some banana. Dry taste with a light bitterness.

I was at Epcot last week, and had the good fortune to be there while they were holding a Food and Wine festival. Conveniently enough (but unmentioned in the advertising), they also extended that to beer. I was able to get my paws on some Ockocim, Cristal (yeesh), and some others that are escaping me at the moment, but only because my attention is focused on the Radegast.

I am not much of a lager drinker, but after having choices such as Budweiser and Miller Lite at some of the other parks I'd been at, the Radegast came as a breath of fresh air. FINALLY a lager that wasn't brewed with crappy adjuncts and had that nasty American mega-brew lager yeast stank to it.

Appearance: A wonderful golden blonde, reminding me of an ex-girlfriend's hair (you know, I really was an ass to that girl, and she was anything but. One of these days, I need to apologize).

Smell: Reminiscent of Urquell (which they also had on tap), Budvar (which I was actually able to find in a six-pack at ABC Liquors in Orlando. Mmm...) and any other really GOOD pils that can be found. I'd be hard pressed to categorize the smell, other than the aforementioned 'nasty American mega-brew lager yeast stank'. A light, malty nose that makes you realize before you take that first drink, "Hey, I may be on to something!"

Taste: None of the overpowering bitterness you find in some of the Franconian pils, just a nice hint of the hops in the finish, followed by that distinctive lager yeast mosey across the beer-tasting finish line.

Mouthfeel: I am generally an ale drinker, and very sensitive to mouthfeel issues. Nothing pisses me off more than a thin porter or pale that feels like it really would rather be anyplace else other than my mouth. Sadly, I can't make the same claim about lagers, as I just don't drink them frequently enough. I could tell the difference between Bud and Radegast, but I'd insist you take away my Beer Drinker's Permit if I couldn't. I could not, however, tell the difference between Radegast and Budvar. So I'm going to say "Damn, that was a fine mouthfeel."

Drinkability: Again, I'm an ale drinker, so these pils went down like water. Give me Clearwater Beach and a quarter barrel of Radegast, and I'd be a happy man. Good stuff for hot, miserable days, but not what I'd want on a November day in Seattle (Elysian Brewpub, here I come!).

Picked up in Karlovy Vary and smuggled back to Moscow in a suitcase overloaded with beers. This bottle is Czech standard borwn half liter with the tapered neck. The label is green, gold and white, with a profile of some nordic-looking guy holding a torch. Ingredients conform to the purity law. Best before 1/14/04, I opened it on 8/12/04.

Pours a clear slightly dark gold under a two finger white head with some body, good retention and respectable lace. The nose is mild metallic hoppiness. The mouth is light and quite prickly. There's not much malt in the taste, as we basically go straight to a tinny metallic bitterness that grows into the finish and stays well into the aftertaste. It's clean and crisp, and a pretty good rendition of the style - certainly better than the brewery's "Premium" version.

The beer after decamping from the 500ml brown bottle sets in the glass a translucent gold color with the head unimpressive in size, the color bright white, the lace a thin sheet that almost covers the glass. Malt dominates the nose, clean and crisp, and not a bad sniffer. Start malt and lightly sweet, the top skinny in its feel on the palate. The beers finish is minimally acidic with the hops adequate and the aftertaste quite dry and just to Watery for me, NO body.

A friend brought me a 0.5 liter bottle of this when she visited the Czech Republic. Thanks April!

Radegast Premium is available here in the United States, but she was told the Originál is not. I've never seen it here. I think she said the bottle cost less than 25 cents. Man, they've got cheap beer over there. But this cheap beer tastes better than our American cheap beer.

This version of Radegast has a green label instead of the premium's red color. There is no English on the Czech label (duh) but I can figure out that it's 4 percent ABV and has a best-by date.

It is a clear golden color with a nice white head that doesn't last. Its aroma is light with just a note of hops and malt.

After having Radegast Premium several times, this seems like a lighter version of it. It's got a good grain flavor like other Czech lagers, but is a bit lighter than the import ones I've had over here. I'm guessing this is the session beer version. There is a little off-flavor, but nothing serious.

The body is light, which matches the flavor.

Perhaps I am being overly generous with this beer because I'm enjoying the pseudo-smugness of having something not readily sold in the U.S. But I think this would be a good lager to drink when you're looking for a no-fuss brew.

Radegast Originál from Pivovar Radegast a.s.
Beer rating: 80 out of 100 with 23 ratings