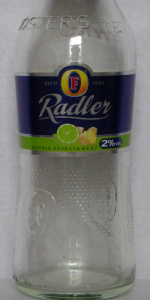 A: Poured into a stemmed pilsner glass. A hazy pale-straw colour with slight sediment and low carbonation. Forms a decent head of creamy white foam that lasts for a couple of minutes before dissipating.

S: A sweet aroma of ginger with undertones of lime; most closely resembles commercial ginger beer (the soft drink). The ginger dominates the smell, along with subtle hints of earthiness/herbal mustiness that are not entirely pleasing.

T: Tastes of sweet lime and ginger, with a sugary, fruity character. Pretty sweet; no 'lager' notes to speak of and no bitterness on the finish.

M: Mouthfeel is light, with pleasant carbonation and an insubstantial body. The ginger tingles on the tongue. Aftertaste of sweet lime and ginger.

O: Well, it pretty much does what it says on the tin. Looks alright, while the aroma and flavour are basically just sugary lime and ginger notes. Light body. More soft drink than beer, but I doubt anyone would pick this up expecting it to be otherwise. Perfectly refreshing for a hot day.