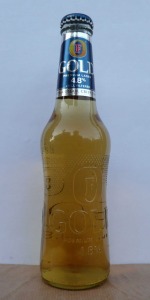 Rated by vinicole from England

The worst of the pilsner/lagers I had during the tasting; I must thank my daughter for finding such delights for me (this and one each from the cheap German based supermarkets Aldi and Lidl). She tries to find beers I've never reviewed before, but sometimes she does things like this, just to test my love!

Poured into a straight pint glass. A clear straw colour with decent carbonation. Forms a large head of brilliant white foam that lasts for a few minutes before reducing to a surface layer. Aroma of very little; ultra-light malt with faint hints of grain, veggies and a slight sweetness. Inoffensive.

Tastes of light malt with a dry finish. Weak hints of stewed hops and overdone veg, with a cardboard note and a pervasive harshness in the background. Not really bitter, but faintly dry upon swallowing. Mouthfeel is thin and watery, with tingly carbonation. Aftertaste of faint stewed veg.

Looks like piss, tastes like piss. This is as bland as it gets - worthless. It's appearance is it's best quality; about par for the style. Some mild but unpleasant off-notes in the flavour - they stand out due to the lack of character this beer displays. I can't imagine any scenario where this would be worth spending money on or drinking - avoid.

Almost no noticeable aroma from this one other than a slight hint of corn and a background skunky bitterness.

There is a little corn that matches the nose and what initially comes across as citrus quickly turns out to be a skunky, bitter finish. I'm not too impressed with this one, although to be fair I wasn't expecting much.

Thin & light bodied but not quite watery, there is a slight tang to the beer as well with a dry finish.

This one is a pretty basic, mass-produced pale lager that I would rate as about average for the style. It doesn't have much of a smell or taste really although it's not quite as bland as some others I have tried & it is drinkable if not enjoyable. Skunky at the end though.