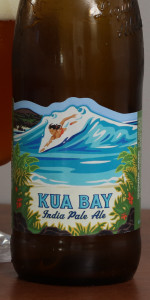 A very nice surprise from this macro...

Though I am very partial to small craft brewers, I am not such a snob that I won't try something new from the big boys. This was new to me from Kona, so a try I give, and I'm honestly glad I did. Great looking brew with frothy head - dark copper in color with highlights. The smell was the least redeeming category but mouthfeel was crisp, taste was lightly piney, citrusy, and very good in all actuality. The overall on this is solid - even for a macro...

Pours a golden-orange with a clear transparency. Head is a finger and a half of off-white foam that retains fairly well. Aroma is a big bite of hops, hitting notes of citrus, herbal, resiny and dank in a sticky, heavy mash-up. It smells like it's packing some heat. Malts come through, but barely, centered on bready, earthy and caramely. Flavor profile is herbal, resiny, dank, citrusy hop notes that stick and clinge to the teeth like a Laffy Taffy. Earthy, bready, caramely malts add a little bit of balance, and do a little to rinse away the hops, but the hops continue to linger long after each sip. Mouth feel is sticky and slightly heavy with a medium-thick consistency. It's full. Overall, jam packed with flavors that continue to linger long after the sip. With that, comes a little additional heat.

Served in a 15.5oz Speigalau tulip from a 12oz bottle.

a pretty classic west coast tasting ipa here, have not really seen this one around on tap until now. its clear, light copper or bronze colored, with a white lace airy head from the tap. nose here is northwestern, piney, higher alpha hops, some columbus or simcoe or both, grapefruit and spruce to me, quite fresh, and as much in the kettle as on the dry hop, bitter, but fragrant too. its not real complex, but its fuller with some crystal malt in here giving depth and body, and the hops fit right. this is kind of a throwback at this point, but it does have some subtle tropical notes in the hops that make it kind of hawaiian to me, at least a little bit. there is good balance to this, but it still finishes dry, and carbonation is right on as well, quite lively, even refreshing. perhaps a little more malt here than i generally prefer, but the hops are bold enough to still drive this one, and overall this was solid, if a little generic as they go. nice to see something other than big wave on tap from these guys...

The smell is of pine - a touch medicinal.

The taste is of pine with with honey and caramel sweetness. Resinous, bittersweet finish.

Light resin stays on the palate in a pleasant way. Smooth.

An Ipa with a moderate pine character. A more balanced IPA that works well.

12oz bottle. Poured out a clear, golden orange color with a small, white head of foam. It smelled of citrus, pine and toasted caramel. Sweet caramel and toffee with a citrus bite/bitterness.

12 oz bottle served in a lager glass.
Pours with a deep amber colored body topped by a decent white head.
Aroma: mainstream English IPA, including a bit of dankness.
Flavor: very nice malt/hop mix in terms of both harmony and balance. Mild+ bitterness for style.

Pours a deep copper hue with Amber highlights, clear, with a slight unfiltered haze, topped with two fingers of dense, ivory foam, with superb retention, and leaving some sticky lacing behind. Lots of visible micro-streams of effervescence.

Nose: A sweet, toasty caramel malt base sets the stage for some very classic old school boil hopping. Lots of pine and floral notes grace the nose, with a slight citrusy element that borders on lime, and a faint, sugary coconut note. It's rather simple, and subtle, but it is a pleasant aroma with no evident flaws.

Palate: Once more, the gate opens up with some lightly toasted caramel malt - mildly sweet, with a faint malt stickiness. The hops initially translate as A sort of cheap, concentrated orange juice flavour. A firm hoppy bitterness sweeps in, bringing a simple bouquet of pine resin, and bitter floral notes. The finish comes quick, with more resinous pine, dried potpourri, and a dry, pithy bitterness. The overall aroma and flavours are a touch muted, and they don't seem to open up that much, even after warming up. There is also the faintest lingering metallic flavour, but it's just barely evident enough to be distracting.

Mouthfeel/Body: The beer is light to medium bodied, with not a lot of heft from that caramel malt. You can feel it as it becomes filling, but it doesn't have the sensation of weight on the palate. Crisp, fairly clean, and not all that sticky. Effervescence is ultra-fine, giving the illusion that it's slightly lacking, although that isn't the case. Finish is drying.

Overall: This is not a bad attempt at an IPA from a brewery that isn't exactly known for their hoppy offerings. It isn't ground-breaking, and certainly doesn't stand out in a crowd. It's a run-of-the-mill West Coast-style IPA, with all of the characteristics one would expect. It's a little more simple than some of its price range competition, and slightly muted, but if offered on tap alongside a bunch of AALs, and cheap, messy ales, I would have no problem ordering it.

Sort of orange in color with smells of malt, pine and bread. Flavor is a traditional ipa, malty, with bread, pine and maybe a slight citrus hit. Seems well balanced and I enjoyed the taste.

Appearance: Pours a orange-gold body with, surprisingly, near nil head formation that disappears in seconds.

Smell: Modestly malty, a touch of dry toast with a hint of toffee-esque sweetness. Hohum citrus fruitiness with a sliver of resinous pine, even a little mint.

Taste: Lightly toasty, bready with ample toffee sweetness mixed in. Citrus (lemon, store brand OJ), spice and pine with a sip of mint-infused black tea. Moderate bitterness. Don't wait around for it to open up, for it to deliver and please, whatever you do, don't lean down beside the glass and shout for it "wake up," because it isn't happening.

Overall: A bit of a dud, really. It has what seems like good components, but it just feels pretty muted. A beer that smells and tastes like the equivalent of a half-hearted shrug.

This is a 7.3% ABV American IPA by Kona Brewing.

Look-It pours an amber gold with a thin off-white head.

Smell-It has a very bready smell with some hints of fruit. It kind of smells like apple pie and some buttered bread.

Taste-The bready caramel malts come through first followed by hints of low-citrus fruits like apples, bananas, and pear. It has a very bready and malty flavor, but there is some piney hops and orange peel rind. It is medium-bodied and with a slight bitterness.

Overall-This is a good brew. It is refreshing and crisp and drinks easily.

Decent IPA with pine tree hoppiness and caramel malts. It's smooth, crisp, and easy to drink for an IPA. I got this beer in a 12-pack Kona beer sampler. I like the Kona Longboard Lager but this IPA is good. Poured from a 12oz bottle into a pint glass. Really a good beer!

Another offering from a Kona Brewing variety pack, this IPA certainly surprise me (especially since the first Brew I had out of the variety pack was the Lager). It pours a very nice copper color with very small amount of lacing, very stubborn. It has the aroma of grapefruit and pineapple I thought, a strange combination. It has a middle of the road IPA taste, a little floral and citrus with a bit of pine. It did, however, have a very nice long Finnish that was very clean and had a great mouth feel. Overall, a solid IPA. Nothing that I would search out if I was in a row of taps but I certainly would drink it again if the opportunity arose.

Smell - Some surprising toasted malt with just a seemingly touch of hop.

Overall - Tastes like like fermented orange juice. Take that as you will. Unique but not necessarily in a good way. Well within date too.

Aroma: Faint sweet, hops and dark malts. Not much on the nose for me.

Mouthfeel: Not much carbonation in my bottle, medium-creamy body with a lighter finish on the end.

I’d call it a laidback English style IPA. Quite good and something I’d like with barbecued food. Not really my main style but a nice departure from all the other typical IPAs.

I can never justify Hawaiian beers when I'm at home in NY or NJ.
But on vacation in Kauai - banzai!
a) Dark coppery, mostly clear amber with short head that lasts and laces little.
s) Too faint, More caramel malt and apple sauce than hop.
t) Here's where the hops rises to the caramel, apple sauce notes. More fall orchard, leaning toward eipa, not much tropical fruit,. But very chewy and good.
f) Creamy, chewy, nice long clean finish.
o) Better than sum of parts.
But there are much better craft examples only available here.

Mouthfeel
crisp, and fizzy with a medium body (which felt heavy for a single IPA)

I enjoyed this beer. It was very drinkable. However I felt the lingering hop/pine esters smell and taste was unbalanced. I wouldn’t refuse it if offered, but I also wouldn’t choose it if better IPA options were available. My bottle was ~4 months old.

on draft at the brewpub, from notes

Amber color and clear. Small head but it leaves plenty of webby lace.

Good caramel aroma initially. The hop is a bit subdued for an IPA.

Well balanced for an IPA. The hop is strong but not overwhelming. Higher carbonation than some but the body is solid. The aftertaste is distinctively bitter and long lasting.

This is an IPA? Smell is malty, light caramel, kind of bland. Flavor is malt followed by moderate bitterness. It tastes a bit like Longhammer (not a shocker since its the same brewery) but with less bitterness. Hops are subtle to non-existent with the exception of the bitterness. Disappointing.