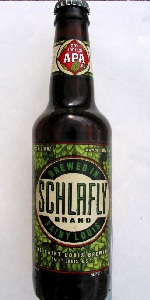 Notes: Our Dry Hopped American Pale Ale (APA) is charged with American hops to create a bold, aromatic ale. Assertive hop flavor joins the pine/citrus aroma characteristic of American hops to balance the full body provided by North American malts. After fermentation, the beer circulates through a bed of Cascade and Chinook hops, boosting the distinctive hop aroma of this satisfying ale.

In the long view of the history of beer, American Pale Ale is a newcomer. Based on English Pale Ale, American brewers adapted this style into something new. Born out of the reverence English Pale Ales during the 1980’s American beer scene, APA is the bold, hoppier cousin of Pale Ale. With an emphasis on American hops, APA is gaining popularity with breweries racing to make these ales with such great hop characters.

Sun-washed apricot with butternut trim. Multiple streams of bubbles plink and plonk into the underside of a golden ecru crown that is filling at least half the glass after a zealous pour. Scattered shards of (eventually crusty) lace don't look nearly as good as beer and head, alone and in combination.

Whenever the words 'Dry-Hopped' appear on the label, my expectations rise. Unfortunately, this one doesn't come through like it should. Citric hops are noticeable, but no more so than in any other APA that doesn't receive special treatment. Edit: a few sniffs just before the beer was gone prompted a deserving score increase.

I wanted more hoppiness, but then I always do. Since the brewery claims 50 IBUs, that isn't an unreasonable expectation. The (primarily) pale malt backbone is acceptable for the style. This isn't a big APA by any stretch of the imagination. The hop flavor and bitterness is pretty close to mid-range as well.

The flavors include lemon and grapefruit with a hint of pine sap and a subtle cheesiness that makes me think that Cascade is in the house. It isn't grapefruity enough to be Centennial and it isn't spicy enough to be Chinook. Columbus is a possibility as well. Despite my misgivings, this really is a good APA that is becoming more hoppy as the ounces pass. Yeah, sure, now that I'm almost out of beer.

The mouthfeel is style appropriate. Wanting it to be IPA-like is probably unreasonable. It's as smooth as glass and is expertly bubbled, which makes drinking a summer breeze. I know because the bottle is empty and I'm not even done with my review.

Schlafly Dry-Hopped American Pale Ale is one of those beers that should be consumed uber fresh for maximum enjoyment. It's still pretty good months after bottling and is a beer that I'd love to see locally.

Pours: clear, glowing light honey. Hazed and cloudy final pour due to the healthy deposit of yeast on the bottom of the one.

Nose: A solid hoppy nose, with a slight soapy under note

Flavor notes: Pleasant hoppy ale. Notes of soft grapefruit, light mint and even lighter soap. Quite dry but not bitter in the finish.

Drinkability: Eh, this stuff is decent but nothing special. I would not go out of my way to procure much more of this stuff

Pours a slightly hazy light amber, almost golden in color. Grainy, crisp aroma. Moderate head with good lacing throughout. Lots of hops evident. Very good going down, bitterness throughout. Excellent APA IMO. Will definitely buy again. Bought it at the only place in our town I could find. Will make sure they keep carrying it. To me a good value for $1.25/bottle including tax - Cheers!

A rather nice looking beer... The big soapy near white head makes this look delectable. Lace is spotty. The beer is a nice shade of golden amber, and once the head calms down a quarter inch layer hangs on. Aroma is lightly sweet with a nice crisp and semi juicy hop aroma over a bed of grainy malt. Dank tropical fruit mixed with zesty citrus, and some grassy floral. Taste is dry and briskly hopped with doughy, slightly caramel maltiness. The hop bitterness is evenly dispersed throughout and lingers on for awhile after the finish. Good well balanced beer with a slightly forward hop presence. Very likable and also sessionable. Good stuff!

Pours a hazy gold color with a big 2 finger foamy off white head that was packed with tiny bubbles and faded very slowly, leaving good lacing with rings as it went down.

For a dry hopped beer this sure smells malty; perhaps the hops were too dry as it does have floral hop and herbal notes, but the biscuit, caramel and malt base seem to dominate. It smells alright, just not as hoppy as I expected with only hints of citrus that make it somewhat hoppy.

Tastes of floral hops, herbs, light spices, caramel, biscuit, lemon zest, wheat bread, malt or grains and a hint of pepper or cinnamon in the finish. Again, not as hoppy as the name would indicate and only average tasting.

Pretty easy to dink, the mouthfeel is smooth, with mild carbonation that’s a little fizzy, a medium body and a dry and slightly bitter aftertaste that shows off more malt than hops. It was average to me and bordered on a let-down since it’s called a dry hopped APA. Should have just been called APA.

Nice, flavorful pale, with strong hop notes on a highly drinkable base. The flavor is pine and citrus, and the close is pretty clean, all told. Tasty.

Appearance: Straight pour into a pint glass. The color is hazy gold. Two fingers of eggshell-colored head dissipated to leave a thin lacing, spotted bubbles, and a ring of buttery foam around the edge.

Smell: Off the bat it smells of freshly sliced grapefruit. (Yowza!) There are also other citrus notes: orange, lemon, and maybe tangerine. It also has a hint of pine spice. Below the grapefruit and citrus is a foundation of sweet caramel, which keeps the astringency in check. Hints of honey also creep in after the beer has warmed.

Taste: The mouthfeel has a lot of body and is pretty dry. Judging from the smell I thought the bitterness would be through the roof for a pale ale, but it is very tame. Overall, the flavor is a well-balanced medley of grapefruit (less dominant than it was in the smell), orange and lemon citrus, sweet caramel, and honey. A bitter aftertaste lingers on the middle of the tongue and back of the mouth.

Beer is yellow and hazy with almost no head. There is some lacing from the broken head but its moderate and carbonation appears to be low to moderate and have small bubbles.

Strong citrus hop aroma, I suppose this is what you are going for when you dry hop. There isn't much else there, the sweet hops cover up anything else that may be lurking.

Beer is smooth with only moderate bitterness. It finishes nicely but dry. The more I drink the more harsh the finish becomes. I think the bitterness is growing on me. I think the best part about this beer was the aroma and I feel that there are better hops to use for dry hopping. Overall the beer was OK to good.