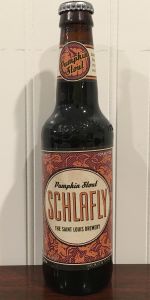 Black in color with no penetration to light. There's a fingernail of beige resting on top. The aroma is cinnamon, nutmeg, and pumpkin pie spice. I taste pumpkin pie spice, nutmeg, cinnamon, black licorice, and dark malt. The mouth is moderately chewy and creamy.

Taste: Pumpkin and roasty stout work together for a well-done balance. Warm and imaginative and rich from the masters of pumpkin ales (Schlafly’s Pumpkin is among the best there is). An ideal cold weather treat and I wish this were more widely available. A winner.

Black. Pumpkin pie, light coffee, bit if chocolate. Accomplishes what it's going for quite well for fans of pumpkin. Very similar effect to pumpkin ale.

A nice roasty stout with pumpkin pie spices. Well-balanced and the spices are not too strong. I'm not getting a whole lot of pumpkin flavor but that's not too surprising.

12oz bottle. Poured out an opaque, jet-black color with a small, white head of foam. It smelled of pumpkin, spices, chocolate and toffee. Sweet pumpkin and chocolate with touch of spices.

From a mixed twelve pack - the first time I've seen this brew. I have a love-hate relationship with pumpkin beers. I recall the first ones that I've had, and I absolutely loved them. Since then, I feel like I've been chasing those first tastes, with only a few select ales having lived up to the challenge. Most are over-spiced and unremarkable. This one, however, is an unexpected gem. It's a very dark, nearly black stout. The head is nondescript, but the aroma is amazing. Creamy pumpkin pie scents, not just spice, backed by roasted grain of a nice stout. The taste is balanced, with a great mix of the spice, a bit of vegetable pumpkin flavor, and plenty of stout coffee-like undertones. The combination gives the beer a creamy fullness and a layered experience, with just the right amount of spice for the sensations. Excellent.

On tap at location. Pours a dark black, with two fingers off white head. Dissipates into a little ring.
Aroma/Flavor - pumpkin, smoked malt, cinnamon, clove, and a slight hint of toffee. Clove is strong, but not over powering. Hops minimally present maybe floral.
Feel - malt dominated, medium bodied, effervescent. Maui not be fully attenuated.
Overall -a must try. Enjoyed the creativity and final product of adding pumpkin and mulling spices to a stout.

Presentation: 64oz Schlafly growler into a Schlafly APA glass. Brewed with pumpkin, butternut squash, and pie spices. This was around $10 for the growler, plus a $2 tip.

Appearance: Dark brown, nearly black, though a bit of light gets through when held up to a bright light. A nice tan head actually sticks around for a bit (even though we picked up this growler last night). Overall, nice.

Smell: Lots of pumpkin pie spice right up front, along with a molasses-like sweetness which reminds me of my late grandma's old-fashioned oatmeal cookies...man I miss those! Simple, but really nice.

Taste: I noticed that some reviews on that 'other' site complained that this tasted just like Schlafly's Pumpkin Ale and I was prepared to be a bit bummed out. No worries on that account. The spices come first, along with a touch of warming alcohol, medium bitterness (from a combination of hops, roasted grain, and spices, I think) and a dry, roasty finish. Just a touch of malt sweetness through the middle.

Mouthfeel: Shockingly (after a day in the growler) this is fairly highly-carbonated. It could be just a touch less, honestly, but it's not quite over-carbonated. My wife and I both felt that this felt a bit more like a porter than a stout though, especially in terms of weight.

Overall: This was a nice surprise. I'd seen that this was one of the 'special' beers at 2012's Hop in the City. I didn't think I'd get a chance to taste it, since we couldn't make it down from Hop, but Taproom put some on after the festival. Overall, I'm rather impressed!

This would probably go for about the same price as the regular Schlafly Pumpkin Ale ($10-11 a sixer) if it were bottled. For that price, I'd gladly pick up a sixer or two of this per season.

89--B+ For what it's worth, if this was called a 'pumpkin porter' (or was a bit richer/weightier, with the 'stout' designation) and had just slightly less carbonation, it'd probably be a point higher.

Had this at the Schlafly hop in the city festival in my sampler glass, and loved it so much I bought a growler of it. This review is from a growler that is a few days old. The beer maintained its quality very well in the growler. Schlafly growlers seal tight and keep the carbonation well.

The appearance is pretty good, especially for a growler serving. It had a lightly tan one finger head that dissipated into a thin sheen on top, with ok lacing.

Aroma is wonderful, but not too over the top. You can really tell that it's a pumpkin beer, spiced, and a stout. Pumpkin aromas are subtle and a little sweet (I can see this may have been made with butternut squash too, at least that's what it smells like to me). The spices are absolutely perfect for a fall/holiday/pumpkin beer, not too over the top but obvious and delicious, with nutmeg and clove standing out, and most importantly (at least to me) not an overload of cinnamon. Roasty stout aromas complete the olfactory experience!

The taste follows the smell quite closely. Roasty malts are followed by a nice spiciness and a moderate pumpkin flavor. There's just a tinge of hops bitterness to complete what is a very balanced and delicious beer.

Mouthfeel is medium, with a lightly roasty and spicy aftertaste. Carbonation is light but ample, creamy, and not inappropriate for the style.

Overall I think this is a wonderful pumpkin beer and a very nice fall treat. I recommend trying a glass if you can get some before it's all gone. Anyone who loves pumpkin beers should find this one quite interesting. The thing I like most about it is that it's NOT over-spiced (a trait that I feel kills a lot of holiday beers).

Pumpkin Stout from The Schlafly Tap Room
Beer rating: 88 out of 100 with 26 ratings