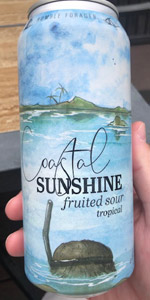 Notes: Coastal Sunshine is brewed with barley, spelt, red and white wheat before souring with Forager Brewery’s lactobacillus blend. Fermented atop mouth watering passion fruit, drippy mango, ripe guava and juicy pineapple. This sour ale will transport you to a tropical paradise, no matter the season.
View: Beers
Reviews: 6 | Ratings: 19 | Log in to view all ratings and sort
Reviews by ogman:

T: Flavor is straight up fruit salad juice with banana, pineapple, guava, mango, and orange. Not really much beer character though and not much if any sourness.

M: Surprisingly light despite the appearance with medium body and low carbonation.

O: Wish it was more tangy-sour and tasted more like beer.

L: I'm not familiar with the appearance criteria of a fruit beer, but I can tell you I have never seen a beer that looks like this. It's a fruit smoothie. Pink-orange body, much like the thick, yet transient, head. It is quite pulpy, to the point of seeing large pulp matter condensing on the glass as the head dissipates after an aggressive pour. It looks very similar to what you might see if you are drinking a glass of tomato juice.

S: The most pungent aroma I pick up is straight up grapefruit. There is not grapefruit in this beer, however. At least not according to the label. Only "Pink dragonfruit, passion fruit, mango, pineapple, and pink guava. I'm not familiar with pink dragonfruit, but maybe it is similar to grapefruit? Either way, there is an unmistakable grapefruit aroma. I can pick up the pineapple as well, not so much the mango. There is a general ambiguous tropical fruitiness

T: Fruity of course. According to the label this is a"fruited sour". It is interesting that the "sour" presence doesn't really show itself for at least a second or two after the drink. Even then it is fairly mellow, and completely overpowered by the candy store it is losing it's courageous battle with.

F: This one is thicker than a bowl a oatmeal. I would compare the feel to a bloody mary more so than another beer.

O: I enjoy this one, but just one. In the future I will probably share with a friend.

Looks like unfiltered carrot and grapefruit juice, almost no head, just orange-pink bubbles that fade after an agressive pour. Smells light - citrus and lactic acid. Tastes like a great sour fruit juice, with a bite of carbonation and slight alcohol in the finish. Thickest beer I have maybe ever sampled

L: Poured from a tallboy can to a snifter glass. Had an orange color and a viscous, almost orange juice-like consistency. There was a quarter inch of foamy head that quickly dissipated. Not a whole lot of lacing.

T: Tasted of bit of wheat (a subtle presence), a good shot of citrus fruit (orange, in particular), light yeast notes (present throughout, though muted by the other ingredients), a slightly musty quality, and a lot of tropical fruit (guava, mango, and pineapple). This is a sweet, juicy and interesting flavor. Quite tasty.

F: A good amount of carbonation with a lively finish. Medium-bodied.

O: A well made, easy to drink beer. Worth a try.

Coastal Sunshine from Humble Forager Brewery
Beer rating: 86 out of 100 with 19 ratings