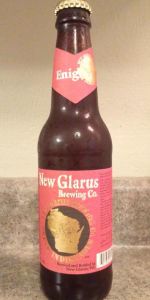 The aroma had nice malts, good wood scents, some cherry, and a touch of yeast spice/funk.

Pretty similar on the tongue, with the funk taking the lead. The fruit was noticeable but not dominant, and the wood added a nice counterpoint.

The body was on the thinner side, smooth and had a dry finish.

Drinkability was very nice, but it's a sipper, not a quaffer.

Overall, another great brew from NG. A must-try if you see it.

Reviewed by DavidR_9 from California

Reviewed by WOLFGANG from South Carolina

Reviewed by Victory_Sabre1973 from Minnesota

Reviewed by farrago from New Jersey

4.49/5  rDev +7.9%
look: 3.75 | smell: 4.75 | taste: 4.5 | feel: 4.25 | overall: 4.5
Modest finger’s worth of dark tan foam, not much density so it dissolves at a quick pace, no real lacing to speak of, just a momentary sheet if you tilt the glass. Given the relatively dark brown coloration of the liquid it displays good transparency, a bit more yellowish at the surface, a few tiny bubbles drift lazily upwards. Cleansingly sour nose of plum to prune, cherry fruit with a more general fruitcake character, coconut flakes, dark chocolate, glazed ginger, bit of a woody char, more vanilla and bubblegum accents as it warms, one likely wants to avoid serving this too chilled. Medium-bodied, has a creamier underbelly of vanilla, chocolate, caramel and coconut custard. However, it has so much acidic zing that you feel it rush through the mouth. The carbonation is mild but not all that needed for the beer to feel crisp. The cherries dominate but nuances of raspberry, golden raisin and apple appear in support. Cinnamon, nutmeg and ginger play bit roles. Finishes with some earthy funk and cider vinegar. Extremely long finish, can’t wash it out of your mouth. Great complexity, harmony and drinkability.
Feb 17, 2018

Reviewed by vainosuomi from Virginia

S - The nose is all about acid and funk, lines of oak and earth, highlights of fruit.

T - Strong hit of acidity, bright and sour, a bit of lactic yogurt, and a strong core of berry-like pucker. Sour raspberries and a definite cherry hit.

M - Brisk as hell, with strong tart pucker, a bit of slickness, and a prickly close.

Aroma of sour crushed candies, the kind that tighten up your forehead and make your mouth drip. Some very slight chocolate/roast malts behind that.

Flavor is very fruity, and implements both bright and dark sides of the coin. It actually comes off like a sour Belgian dark ale. Very cool. It's got notes of banana, persimmon, dark cherry, lemon, salt, plum, apple, apple cider vinegar, and then some suggestions of chocolate, spice, cinnamon, and then coffee on the very tail end. It's like last year's Oud Bruin, but fruitier overall, much less complex, and more focused.

Overall, I might like Oud Bruin just a touch better, but this is no slouch by any means. A fantastic dark brown ale that I'm glad I could pick up at the brewery (even if it was $5 a bottle).