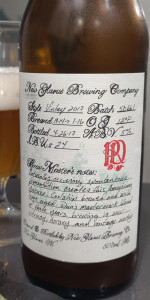 Smell - The beer had a nice sour apple nose with funk apparent.

Taste - At the front, notes of green apple, candy sugar, lemon rind, and funk. The funk carried the profile to the back. The beer had a tart and dry finish.

I apologise to Joe for not giving a proper review of this wonderful beer he sent me.

What I will say is this.... This has no frills. It's an extremely well made, simple, wild ale. It looks pretty. It's smells nice and tart. It tastes wonderful, also nice and tart, and funky, and woody with a sweet grainy finish. It feels glorious. Light, crisp, tart, well carbonated, smooth, and easy to drink.

Almost every New Glarus beer I've had has come from Joe, and I've greatly enjoyed them all. Wisconsin, you have quite a treasurable brewery there. I don't blame you for keeping it to yourselves.

poured from a 500mL bottle into a perennial wine glass. pours semi hazy gold with a thin layer of white head that fizzles away quickly and loudly. a foam ring remains around as a white collar around the glass. smells very lambic-y - green apples, white grapes, white wine must, oak. get a lot of green apple and grape must on the flavor with an oaky, sharp acidic finish. mouthfeel is decent but seems like the mouthfeel of lambic, which is to say a little thin and over-the-top sparkly / bubbly. it’s a really good sour offering that leans a lot on the lambic style. great flavors though.

On the level of any other Belgian Lambic in my mind. I love the funk in the smell and on the tongue. Has less carbonation than some Belgians. Complex and wonderful though.

A: Very effervescent. Pours a very cloudy tan with a large head. The head, however, immediately dissipates, leaving no lacing. The body carbonation is exquisite, however, and lingers while drinking.

S: Very salty. Like a gose, in fact. Also a lot of breadiness from the Belgian yeast, and a sour lemony tartiness. In conclusion, it smells very salty, bready, and sour.

T: Follows the nose with the addition or orange peel. Good if you like the style. Personally, I thought the saltiness was a little much (but it's still a very well-made beer).

F: Great - nice and clean despite the cloudiness.

O: A good beer. Not as good as some of the other sour offerings from NG, but still good.

Funky and dry.... not much tartness to be found here, this is more funky. Smells and tastes like it was cave-aged as the bottle suggests. Really enjoyable drink here. I shared this with a couple of other friends and I'm glad I did. Getting through the entire bottle would have made it tough just due to the dryness. That being said, this is really well done and I enjoyed it. A definite blue-cheese vibe to this.

Saturated orange with a slight haze, very effervescent with audibly crackling foam that fades fast to nothing. Champagne streamers rapidly rising, no lacing or surface skim.

500ml bottle. Unfiltered, slightly cloudy golden yellow body. One finger white head. Tart lemon, bright citrus, moderate acetic acidity, oak, a bit of vinous grape, mild-moderate leathery funk. Complexity is great, especially on the nose. I fully expect this to develop more funk in the bottle based on previous Vintage releases. Really nice tartness and complexity, and was great to drink on a hot summer day. Mouthfeel is medium bodied, mildly dry, otherwise effervescent and does a great job all the way through. Very good depth. Overall, a very good geuze-like blended wild ale! I think blending 3 years together now has added more complexity off the bat, just like 2014 did (and 2015, 2016 did not).