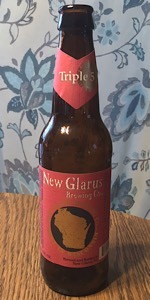 Pours a foggy, burnt orange body capped with ¾ of a finger of fluffy, eggshell-white foam; decent head retention leaves frothy islands of cap, a thin yet creamy collar, and a limited array of taut, webby lacing haphazardly spread around the walls of the glass.

Taste brings bubblegum yeast and mild phenols upfront to meet heavier burnt bready tones and toasted clove over the mid-palate; a burnt caramel char aggressive into the back end fades delicately with a finish sporting hints of bready spice.

Mouthfeel offers a medium-light body with full, rounded carbonation, textures spritzy with a subtle, yeasty prickle; a pillowy grit attenuated by the softer yeast over the mid-palate becomes extensively drying, laying bare a quietly robust character to the finish.

Sparser spice and more resounding char to this American take on a tripel lessen the plushness and pillowy yeast profiles common to the most well-attenuated of Belgian interpretations; in turn, this one shows a more forward flavor, brief yet focused, and a commensurate crispness amplifying drinkability at its ABV.

Cloudy light copper body. Clove, sweet caramel, a touch of spicy pumpernickel, light earth. Sweet and slightly boozy as a tripel usually is, but the yeast esters show off their nuances and beer is balanced. Full body, good carb.

Poured from 12-ounce bottle into a Trappistes Rochefort logo chalice. Deep golden color, with a reddish-yellow highlight and thick white head that eventually settled to a thin cap. Beautiful aroma that recalls the typical Belgian profile, with tons of banana and clove and a bit of funk. The taste follows the nose, with good carbonation even after sitting a while and a lot of bitterness lingering on the dry finish. This is worthy. Sante!

BOTTLE courtesy of Judith - thanks!

Served chilled into an Avery stem-tulip.

Doesn't seem boozy at all.

TASTE & TEXTURE: Texture is coating and silky smooth with a refreshing juicy feel to it. Carbonation is perfect; bottle conditioning was definitely the right play here. Refreshing despite its 9% ABV - which never manifests in its taste (a rarity in the Tripel style). A bit prickly with hints of dryness that accentuate its biscuity saccharomyces and clove-redolent spiciness.

Balance is the name of the game here, and the unconventional 5 malt approach seems to be working well for New Glarus.

OVERALL: I'd have to say I prefer this to most traditional expressions of the style, and it's easily a standout American attempt. Barring unconventional takes on the style like Gulden Draak, this may well be my favourite - up there with the Trappists. One of the only takes on a tripel I've had that isn't overtly boozy and that I'd actually want another bottle of in the same sitting.

Clear rose-tinted gold with a couple fingers of dense, sandy-colored head that easily stacks up above the rim of the glass. Solid retention and lacing.

The taste follows up front, joined by some bubblegum, but with more bitterness in the finish than expected and even a hint of cardboard.

Looks and smells great. The bitter aftertaste is a bit harsh for my palate.

Pours cloudy amber with a couple fingers of off white bubbly head. Plenty of lacing chasing you down the glass. Aroma is orange, lemon, malt, funk, and bitter hop.
Taste follows suit with some smoky undertones. Feel is very soft, smooth, and full. You wouldn’t assume the abv from the smoothness. Good beer.

Pours an orangish color not unlike many Belgian style ales. Has a citrusy / lemony smell with some barley/malt. Has a slight banana, spice, malty, slightly hoppy taste. Smooth mouth feel for a Tripel. I'm generally a fan of what New Glarus does and this take on a Belgian Tripel is really a hit.

Semi-cloudy bright golden pour with a fat finger of off-white foam. Big grains, wheat, hay, and yeast with lighter lemon, apricot, candi sugar and banana. Taste adds bubble gum near the finish, phenols through out, and hints of apple, pear, black pepper, and big flowers. Feel is medium bodied, grainy and spring both in a good way, well balanced and somewaht rustic while being very drinkable. No real weaknesses. The wife liked it

12oz bottle. No dating information found; etched on bottle is '020266211873B'.
Slightly cloudy, pale gold colored body. One thick finger of pillowy white head, which recedes very slowly. Leaves behind strings and trails of lacing.
Aroma is similar to a Hefeweizen - pencil eraser, cloves, and banana, along with some additional yeast and spices.
Taste continues with cloves, coriander, banana, and pencil eraser, along with candy apple and sweet caramel. The sharp yeast and sweet apple continue into the aftertaste.
Mouth feel is denser than medium, with a soft and pillow like texture. Very good carbonation.
The yeast esters are very dense here, with lots of fruit and spices. The higher ABV% is felt more than tasted. Good candi tripel notes.

12 oz bottle poured into a Duvel glass. It's filtered, dark orange with a lively and retentive head for a beer of its strength.

Smells like a wonderful melange of grain and yeast. Cloves, bananas, mild pepsin, and fruity complexities. Fairly straightforward for the style, but this is an intense and variegated style that is not easy to brew.

Tastes like it smells: a very solid iteration that's not discernably different from a good Belgian-brewed tripel, but still falls short of the very top tier. Lively spice up front--the aforementioned cloves especially--with some sweet spice in the middle and fruit esters on the back end and finish.

Coriander, bubble gum, bananas, cloves. Wheat. Like a German hefe with Belgian yeast and imperial. Spices all around. Smooth. 9% is hidden fairly well.

Appearance - The beer poured orange- yellow with visible carbonation and a white head.

Smell - The typical Belgian nose was a bit weak. Notes of banana were present.

Taste - Belgian yeast, bananas, and candy sugar led the profile. The profile was well balanced, and not too harsh. The alcohol was well masked.

Mouthfeel - The yeast coats the whole mouth, allowing the profile to linger.

Overall - This is very solid for the style.

APPEARANCE: Mildly hazy like a juicy IPA from a brewer that's trying to act like they hate hazies, yet still wants to jump on the bandwagon with an "unfiltered" one. The head is about one finger high in my tulip glass and settles into a half finger and then just simply doesn't move. The foam from the first sip aggressively sticks to my moustache, but even as I set the glass down that head is still there. Lacing here is thick, heavy, and layered, leaving a clear record of each, individual sip.

SMELL: As I poured this two feet away from my face I could already smell it. Banana and bubble gum; classic, yeasty signs of a Tripel (to me at least) attacked my nose. As I moved the glass towards me, the black pepper, a fruity esters became very apparent as well. Although some aromas shined brighter than others, there was zero subtlety for the nose here. It is aggressively a sweet, sexy, complex aroma and I like it.

TASTE: The Belgian candi sugar came through on the nose, but it leads the charge on the palate. It's quickly washed to the side by a somewhat aggressive hop bitterness. The spice, bubble gum, and banana are all there as well, but hints of strawberry and a yeasty breadiness round it out.

MOUTHFEEL: While this Tripel stays true to the style in the sense that it doesn't feel like a 9% ABV beer, there is a noticeable booziness. As a guy who's consumed a lot of different beer with varying degrees of alcohol content, if I tasted this blind I would have guessed it was about 6.5 - 7.0%. As I mentioned above, it start sweet, but finishes bitter and dries out as it fades, an excellent method it has for enticing your palate to take that next sip. The light body and lack of ability to determine the full ABV makes this a beer that seems easily chug-able.

OVERALL: As with most Tripels, enjoy at your own risk. These suckers are delicious, enticing, and potent. New Glarus's version, of course, lives right up to those style guidelines. This one is well worth the risk though. One of the better beers I've had from one of the better breweries on the planet. Buy a 4-pack if you have the chance and then plan to "accidentally" drink all four that night. Good luck!

Shortbread, citrus, nutmeg, clove and banana aromas. As random as that all sounds, it’s very harmonious.

Phenolic pepper and clove, mildly resinous, silky texture with an ample full-bodied feel. Light citrus and spices play well together. Belgian yeast is noticeable and gives off a lot of phenolic and estery characteristics. Finishes dry with a slightly earthy hop aftertaste, and lingering phenolic pepperiness.

Overall this is a well balanced beer. The spice character isn’t overwhelming, and the ABV is fairly well hidden. It strikes me as a classic example of the style.

Golden honeyed opacity that really just looks incredibly... rich. Fluffy head is lipid-white and retains at least a buzzcut worth of volume. Some lacing, but not much.

Nose, again, is rich and very sweet. I'm not really the biggest fans of tripels... they're just too sweet for me in a way that just tastes like a hangover, but the smell is very rich and really well done. Banana esters and spicy belgian yeasts... this aroma is pretty much exactly what I would expect from a creamy sweet yeasty tripel treat. Just because it doesn't really get my juices flowing doesn't mean I can't appreciate how well put together it is.

Still somewhat sweet, but not quite as sweet and/or decadent as the aroma. The yeast is in there and offers some of that spice and ester, and there's a little bit of that rich sweet center that doesn't actually taste like, but always kind of reminds me of sheet cake. It gets really like... barnyard bitter through the second half that is a little more than expected.

This is really well done.
I don't really like tripels, but I'm not obtuse. New Glarus has a reputation of being very good at what they do, and this is no exception. Thanks @FBarber for sending this my direction as a part of NBS BIF#13!

For a triple style beer, this is just an average beer. Taste and smell is more like that of an ale and a little light tasting. Not sure would buy again.

Light amber pour in a 20oz glass stein. Leaves a mild to moderate head based on aggression of the pour.

Immediate burst of hops quickly gives way to barley notes. A mild malty finish then comes, dissipating a rich mouthfeel with a silky end. Goes down as pleasantly as a pils, but is distinctly a tripel, from nose to throat.