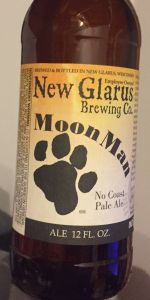 Notes: You hold a session beer with a bright bold blend of five hops that flirt obligingly with the smooth malty backside. Don't let this one lay around it is brewed to be enjoyed today. Bold and engaging without pretense, because in Wisconsin you do not have to be extreme to be real.
View: Beers | Place Reviews
Reviews: 556 | Ratings: 2,743 | Log in to view all ratings and sort
Reviews by Nowlansavage11:

I sometimes wonder why I bother to write these reviews when the labels describe the beer with more artistry than I ever could. Take for example this from my beer du jour, Moon Man No Coast Pale Ale by New Glarus Brewing Company: “Moon Man is a seriously cool cat. Always comfortable in his own skin, he never tries too hard…You hold a session beer with a bright bold blend of five hops that flirt obligingly with the smooth malty backside. Because in Wisconsin, you do not have to be extreme to be real, just be.” It’s incredible to realize that the culture and philosophy of an entire state can be contained in a 12 ounce beer bottle. But hey, this is Wisconsin we’re talking about.
I’ve been looking forward to this one, having had some of this a couple of weeks ago while on a camping trip. I delay gratification in order to enhance the pleasure, reading the label in order to get to know my eventual conquest. Apparently, consumption of alcoholic beverages can impair my ability to drive a car or operate machinery. Fortunately, I have nowhere to go tonight and do not own a chain saw or punch press; I’m good to go. Good to go except for the fact that I don’t have a Damn bottle opener. Shit. I brought 2 with me camping--just to be safe--and returned home with exactly none. How does that happen? Stay cool, bro, there’s gotta be something here I can use. (Several moments later) Well, I’m going to have to buy my wife a new salad fork, that’s for sure.
My mind is drifting back now to that Homer Simpson bottle opener I was eyeing up a few months back at Big Lots. It was only a couple of bucks, and it uttered a Homer quote every time you used it, but somehow it didn’t quite fit my personality. I tend to avoid kitschy unless it is beyond the pale, like my Vanilla Ice beach towel. I curse my pretentiousness as I scour the kitchen for something that could be used to remove a cap from a bottle.
Hearing my movement, our guinea pig--ever the optimist--senses that I could be searching for the vegetable peeler in order to peel that bag of carrots that has been sitting in the refrigerator. He begins to emit a squeak guinea pigs are noted for (imagine trying to say the words “weak week” four octaves beyond what you are capable of). Of course, Charlie, being a young guinea pig, doesn’t quite have his squeak on yet. His young voice often breaks while trying to get my attention, but he is undeterred. Between squeaks, he grabs the bars of his cage with the pronounced front teeth that are typical of his breed, and begins to shake them mightily. An idea enters my head. I cautiously lift Charlie from his cage (I’ve never been too comfortable holding animals or children), and place him on the kitchen counter. I then grab a carrot from the bag in the refrigerator and grind some into the edge of the cap. I then wave the bottle in front of his nose--he takes the bait. His incisors now clasped firmly on the bottle cap, I grasp the bottle firmly with one hand while delivering a quick conk on his noggin with the other. Success! As a bonus, he even made a cute sound as he opened my beer, not unlike the Homer Simpson bottle opener previously mentioned.
And now it’s Miller time. I return Charlie to his cage, and as a reward for his good service, fill the bottle cap up with Moon Man for his enjoyment. He laps it up eagerly as I drink along with him. I decide that it is only fitting that he helps to review this beer with me. I ask him what he thinks, and he stares at me rather woozily, his mouth sporting a foam mustache. I cannot tell whether his condition is from the beer he just consumed or the bonk on the head he recently received, probably a combination of both. But after a time he finally manages to utter a rather hearty squeak. I can’t help but agree. Two big squeaks for Moon Man Ale.

This is one of my favorite beers. The mixture of hops are refreshing with a slight fruity flavor. Whether it's a hot summer day or a chilly autumn one, this beer is perfect.

12 oz can poured into a pint glass no canned on date.

S: lots of over ripe fruit light honey and a nice caramel smell.

T: Lots of light soft over ripe cantaloupe and orange then a nice toasted caramel finish.

O: this beer has nice fruitiness with great malty backbone and a very crisp clean drinkability. This beer is pretty close to perfect.

Sparkling golden color, a lovely head adorns the top. Ripe ruby red grapefruit, fresh-cut grass, wildflowers, nutty yeast and a little cracker in the nose. Dryish medium body that throws down its crispness on the palate right away. Clean, sharp bitterness from the hops cuts right through the dry maltiness, leaving citric and herbal flavors in its wake. Maltiness digs in deep with a uniform biscuity flavor and a somewhat faint, raw graininess. Vague fruitiness and a quick showing of nutty yeast add some complexities without getting in the way. The pulling dryness really does tell the palate that this beer is well attenuated.

Love the theme behind this beer: It's not about being from one coast or the other-- just about being a quality beer. Prime example of the American Pale Ale style, it's incredibly drinkable.

Just a great example of an American Pale Ale. Perfect in every way.

The lead guitarist in my band drinks so much of this stuff we named him after it. I’m probably not ordering it at a bar, but I’m definitely asking the Moon Man for one at practice. It’s solid, but in my mind Hop Haus outta Verona is the superior Pale Ale brewer.

Pours a clear honey yellow with a thick white head that dissipates rather quickly leaving no lacing. Aroma is biscuits and caramel malt. Flavor is sweet malt with a nice hop bite in the finish. Feel is crisp and clean. Overall a very nice session ale.

While I prefer the amazing fruit beers by New Glarus this is a pretty damn good pale ale. Smooth, citrusy and just the right amount of carbonation. Had to trade for this one, but if it was available locally I would buy often

Nose
Grapefruit up front. Floral notes also lived in the hops. Not much from the malts besides subtle notes of nutty grains.

Mouth
Citric hops hit the tongue first. Grapefruit blended with herbal flavours to create a vibrant, yet contained hop flavour. A mild biscuity malt backbone served as a great platform for the hops to be showcased on. Light body, leaning toward the medium side. Moderate/high carbonation.

Overall
Excellent pale ale. Plenty of flavour. Would be perfect on a warm day!

I don't feel like I need to go much into talking about this beer. All you need to know is that it is a really fantastic pale ale, you need to buy it if you can make it up to wisconsin, and it contains a type of hop that hasn't been used by commercial beer companies in the United States.

If you live in the midwest, you need to find some new glarus. They're not all great, but none are bad, and some are rad.