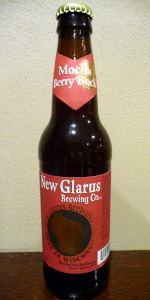 Conceptually, berries and bock sounds like a good idea, but the execution falls short. The depth of fruit is what I've come to expect from New Glarus, but there is a clash between the fruit and the bitterness, which I assume is hop but could perhaps be roasted malt. The result is a sweet fruitiness that hides an off bitterness, and that means it reminds me of cough medicine. The bitterness comes through in the finish, an I find the if I let the beer pass quickly in my mouth, it comes across as someting like their main fruit beers with a slight chocolate finish. If I try to savor that finish, cough medicine. If this were simply mocha bock or berry beer, I'd be pretty pleased, but the combo is flawed.

First is a bias: New Glarus occupies a special place in my heart; being my favorite brewer for almost two decades, until I found Off Color in my own backyard... (but NG remains #2 without rivals.)

Second, NG brews in two styles in which its beers are pretty consistently world-class: first, its lagers range from faultless to great; second, its fruit beers dominate because they are as close in complexity as can be to the best Lambics.

Mocha Berry Bock combines these two NG world-class interpretations into one brew. Building from its strengths, NG nearly succeeds in, yet another, world-class creation.

I can't recommend any improvements other than the obvious: perhaps more mocha malt and less berry. How do to do that? Dan Carey can figure it out.

5/17/22 Had a second bottle at the end of a surprisingly cool spring day and it was a treat. I even saved some for dessert. Keeping count @ UnTappd.

This beer pours a reddish brown color. The head is somewhere between red and white. The head is 2 finger and long lasting, however, there wasn't much lacing.
The nose is a berry bomb. I get blackberries, and raspberries. Well balanced, and pleasing to the nose.
The flavor is a berry bomb up front. I get raspberries, and blackberries in the flavor. They're a combination of sweet and tart. The berries linger, but are added to, on the back with a nice biscuit, bread malt flavor that adds even more to this beer.
The body is decent. Very smooth feeling.
This is delicious, but it went down way too fast. I do recommend this.

Appearance - The beer looked like a bock, brown with ruby hints and a small head.

Smell - The berries largely overruled the maltiness of the bock.

Taste - Even though the beer is flavored with raspberry, it reminded me of Belgian Red. The fresh berry taste is not overwhelming, but the base beer is hidden. Raspberries continued to the aftertaste.

Mouthfeel - The beer had medium carbonation, with a somewhat heavy body.

Dark crimson tone, two fingers of foam, lasting head and even a thin collar of spotty lacing around the edges.

Raspberry aroma, tiny bit of yeast in the periphery. Not getting any chocolate or bock related aromas.

Lighter side of medium bodied, ample carbonation, fruit forward. Pleasant enough as an apertif, not something i’d want more of. Thankfully not as sickly sweet as some of New Glarus’ fruit beers lately.

Part of the Thumbprint Series. ABV is not listed on the bottle or on the website.

Pours tan colored, thick with a modest head of foam. Aroma is highly raspberries, present when poured. Just a whiff of chocolate can be detected, though it is quite faint. Taste is up front raspberry with chocolate notes, some very mild hint of caramel and a dry, bitterness coats the tongue. There is a similarity to beer brewed with tea. This is very distinct and not your typical bock. It is pleasing but holds its' distance. Quite unique.

Heavy raspberry in the nose

Heavy on the raspberry in the taste, maybe a little less tart than their regular raspberry brew. Ever so slight cocoa note in the finish.

This one pretty much defies categorization. If you're looking for bock flavors (or for that matter, mocha flavors) you'll be disappointed. But is it tasty and refreshing? Sure!

Unbalanced and surprisingly disappointing for a great brewer. Berries overwhelmed everything else with an almost candy sweet quality. Not sure what was trying to be achieved.

Appearance: medium brown body with a red hue. Thick cap of off white head; scant spotty lacing. Head dies down to no head with a thin ring around the glass.

Taste: big tart raspberries upfront that seems to thin out towards the end of the taste into a very subtle caramel and chocolate note in the finish. I can say I have never tasted a beer like this before. Not getting much of the coffee aspect of a beer labeled "mocha" in the name. The berries kind of wash over most flavors of this beer.

Mouthfeel: On the light end of a medium bodied beer with low levels of carbonation present. There is plenty of carbonation in the beer though. drinkable not boozy.

Look - dark red clear with a big reddish white head and lacing
Smell - raspberry mostly
Taste - chocolate raspberry slight sour but sweet as well
Feel - lighter body with a medium light body
Overall - can't really tell this is a bock and has a very slight chocolate. This is more of a easy going raspberry tart. Dialed way back from there standard raspberry tart sour. This is very drinkable and not overly tart or sweet. Really nice