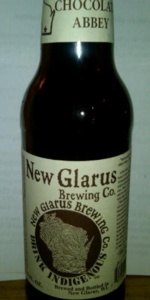 From bottle to Tempelier tulip.

Pours a clear deep brown color with a light manila colored head that fades relatively quickly and left legs of lacing down the glass.

Aroma is heavy on bananas and cocoa. A little spice and malt in the background.

Taste mirrors aroma for the most part. Tastes like a chocolate covered banana… A little spice and bubblegum in there as well. You can still tell it’s a dubbel though. Medium mouthfeel with a crisper carbonation than expected. Light cocoa flavor on the fairly crisp finish. Alcohol becomes noticeable, in a good way, as the beer warms.

I see this one pairing very well with a dark chocolate dessert.

Overall a very good dubbel that is definitely unique. I think/hope a bit of age on this one will mellow and meld some of the flavors a bit. Only one way to find out; buy a case and cellar a bunch!

The aroma starts with a fusel alcohol smell that gives way to spicy phenols. A little much at first, but gets better as the beer warms. After that initial blast, the aroma is raisins and carmelized sugar, plus nutmeg. No noticeable hop aroma.

The flavor starts with a sweet, yet dark, chocolate, then gives way to grainy, bready malt, followed by a background earthy hop bitterness, which finally gives way to a lingering spicy phenolic and warming alcohol finish.

Fairly full bodied with lots of warming alcohol, though it goes down smoothly with all the chocolate and sugar. A bit of sticky sweetness at the end, but still dry enough to give a smooth finish.

A: Pale brownish black with a thick creamy head that stays that way for quite a while. Translucent.

T: Surprisingly has a gripping taste. Despite being thin, the cocoa really pops and tickles the tongue, much like a toned down chocolate ale. Some other spices like cinnamon and clove give a good kick too. Song spiraling twang from the mild but end-rising carbonation that prickles.

M: Creamy and mild in carbonation, yet prickles on the end. Fairly significant drying.

O: An odd beer for sure, most closely resembling Boulevard Chocolate Ale.

The smell from the bottle was just what the bottle said (though more than I'd have ever expected): chocolate and more chocolate, with banana in there as well.

Pours an opaque brown, topped by a massive creme head that dissipates quickly.

As someone else said, the taste surprises with a bubblegum flavor with none of the chocolate or banana from the smell.

The mouthfeel is solid, but not outstanding.

This is an interesting beer with a lot of surprises. I would't call it a great beer, or one I'd seek out again, but I suppose it's worth a try if you have a chance and want to try something unique.

Poured out of a 12 oz bottle into a snifter

A) Nice looking deep brown. The pour led to a creamy looking two finger head. The head settles to a dusting. Nice retention and lacing. Quite an inviting looking beer.

S) There is no mistaking that Belgian yeast. There is chocolate and a fruity aroma, mainly banana. It reminded me of a banana and chocolate chip muffin.

T) Roasted malt, bit of caramel, the yeast, chocolate, dark fruit, and alcohol. The flavors are greatly enhanced as it warms.

M) This was thinner than I expected based on the appearance. It was a medium body, with a good dose of carbonation. Decent finish, with an aftertaste of fruits and booze.

O) A nice sipper. I would have liked a bit more chocolate, but that is a minor complaint. This was worth a try.

Smells powerfully of fruit and chocolate. The Belgian yeast smell is overwhelming the chocolate here, but its character is very particular and unique.

An unrelentingly fruity and chocolaty palate makes this beer rather difficult to describe in beer-terms. It is not unlike the flavor of black licorice, has just a hint of leather and a crisp bitterness.

Medium bodied with a clean finish and little lingering flavor.

A very unusual beer to be sure and I'm not quite sure how to rate. I rather doubt this one will see a second commercial run, but I've enjoyed the experiment.

A - Pours a dark brown with a one inch, fizzy tan head that fades fast.

D - Good carbonation with a medium body and a chocolate finish.

O - Very unique and delicious. I enjoyed it.

Served in a snifter. Thanks to Duff27 for hooking me up with this brew!

This is definitely a Belgian Dubbel - the beer pours a murky brown with a slight reddish hue when the light comes through. The head was about a finger, soft, and pillow-like due to the small bubbles. It was almost pure white, and it went away in a hurry without leaving any lacing.

The first thing I get in the nose is the Belgian yeast spice - pepper, clove, coriander, and all the other Belgian yeast goodies. After some more vigorous sniffing, the chocolate makes an appearance. It's subtle, and I don't think I'd find it if I wasn't looking for it. There's a slight alcohol tinge as well, which is actually pretty nice.

The chocolate is way more present on the tongue. The first thing I get is a big chocolate flavor, almost like a tootsie roll. It kind of reminds me of Sam Adams Chocolate Bock. The Belgian yeast is a little more subdued on the tongue, but it still brings all of the spice character from the nose. As it warms, the Belgian flavors are almost dominating, leaving the chocolate at the back of the tongue. There is almost no alcohol flavor to be found.

True to a Belgian-influenced beer, this is almost over carbonated. It's also very dry, making it pretty easy drinking. I expected a bigger body considering this beer has chocolate in it, but it's pretty true to the light and effervescent Dubbel style.

I'm a bit disappointed in this one. This is by no means a bad beer, especially if you like the Belgian yeast flavor. The chocolate adds some nice complexity, but it just doesn't blow me away. Would I drink it again? Absolutely, but I won't be actively seeking this one out.

A-Pours with lots of off-white, creamy head, over 2 fingers. The head leaves excellent lacing on the glass. Clear mahogany color.
S-Very obvious aroma of cocoa along with the typical spicy belgian abbey aroma with a hint of sweetness and vanilla.
T-A very distinct cocoa flavor with a belgian abbey flavor that adds some spice.
M-Lots of carbonation. Very thick and malty. Fairly high alcohol.
Overall, a very interesting beer. The chocolate is not overly sweet and really doesn't dominate. The beer is very balanced between the chocolate and the abbey style. I can taste the abbey ale very clearly and the chocolate along with it. I think this one might be an aquired taste but at the same time it's really well done. I've had chocolate beers before and they end up tasting like cake batter but this is much more balanced.

Appears a very dark brown with a foamy collar on top, not much lacing, but it smells to me like a chocolate phosphate and bubblegum with a tiny accent of allspice. Flavor is also a bit like a well-made chocolate phosphate but also has components of band-aid plasticness, bitter cocoa powder with extra astringency, and heavy hard water mineral qualities. Sparkling-style carbonation on a medium body makes this one tingle on the tongue quite a bit. Finishes semi-dry, but lingers on the palate for quite some time. An oddball beer that speaks to my love of the unusual. If you like the flavor profiles of chocolate phosphates, you'll probably like this beer as well.

Zuidman, May 20, 2014
Thumbprint Chocolate Abbey from New Glarus Brewing Company
Beer rating: 86 out of 100 with 253 ratings