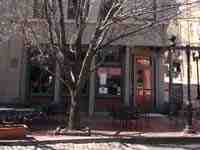 3.83/5  rDev +15.7%
vibe: 3.5 | quality: 4 | service: 4 | selection: 3.5 | food: 4
Morgan Street Brewery is situated in a gentrified part of the old Mississippi riverfront, more or less in the shadow of Sarinen's famous arch- the landmark of St Louis. The inside is spacious and is probably an old warehouse stripped down to its brick walls and wooden beams. I went there for lunch and the place was rather crowded with downtown professionals in various ages. In the summer it probably gets it share of tourists. The tap selection of the brewery's own beers was not great. Six varieties, and only one of them seasonal. Both the food and the service was good, though.
Mar 22, 2006
More User Ratings:
Rated: 2.91 by RiceOwls27 from Texas

2.73/5  rDev -17.5%
vibe: 3 | quality: 3 | service: 2.5 | selection: 3 | food: 1.5
long established (1995) brewpub near the river and the Arch, that is more of a restaurant than brewery. The beer selection is more for the masses, not beer geeks. The 6 house beers were all lagers. The schwarzbier was okay, the pilsner was pretty good. We got our drinks fairly quickly but the food took forever and they weren't even busy. The pizza was horrible - like someone put american cheese and ragu sauce on a stale tortilla. Maybe the burgers are better, but I wouldn't eat here again.
Aug 20, 2017
Rated: 3.35 by jessewilliamson from Missouri

2.76/5  rDev -16.6%
vibe: 3 | quality: 3.5 | service: 2 | selection: 2.75 | food: 2.25
Very easy to find in the Laclede Landing section of St. Louis, I was excited to visit this brewpub. The canned beer is excellent, and I had high hopes. At the restaurant, however, I was somewhat disappointed. The beer selection was a nice, but limited mix of mostly German styles. The Helles and the Maibock were both respectable and tasty. But, whereas the beer was solid, the food, atmosphere, and service were all substandard. First, although they were not busy, waitstaff stood by chatting, rather than seating my family for several minutes. The service was then slow, inattentive, and mostly disinterested. Beer was served out of a clearly chipped glass. The food was acceptable pub fare, but, frankly, on par with most chain casual dining restaurants.
I liked the good beer, but I won't be going back again to eat.
May 24, 2015
Rated: 3.5 by atlbravsrno1 from New Hampshire

Reviewed by Volsdawg10 from Mississippi

3.85/5  rDev +16.3%
vibe: 4 | quality: 3.5 | service: 4.5 | selection: 3.5 | food: 4
right in the heart of the downtown area, right on the river, this place has the perfect location (aside from no parking). the place was totally dead on a monday evening, which i dont hold against them, and i didnt mind having it more or less to ourselves. the bartender was really nice, generous with samples, and chatty. the beers we had were all good, pumpkin lager being excellent. not a ton of innovation, but enough to be engaging, and i thought the execution was solid for the most part. just had appetizers, but was more than happy with what we got to eat. the building has a ton of character, so the atmosphere is pretty cool, a low lit pub feel but nicer than average, even though it was empty inside. would be a nice place to bring a first date i thought to myself. imperial pilsner was also an impressive brew, and prices were decent. ill be back, even though nothing stood out as earth shattering in the beer department, i think the place has a lot going for it, especially the service and the vibe. B+
Nov 21, 2012

2.58/5  rDev -22.1%
vibe: 3.5 | quality: 1.5 | service: 4 | selection: 2
This place is located on a little waterfront dealie downtown, right next to the arch. The area is touristy, but also filled with loud music attractive, drunken young people, so I assume there's a decent amount of townies there, too. Anyhow, I went late, so I can't judge the food or dining atmosphere. As a bar, however, it was pretty pleasant in spite of being loud and packed. The crowd seemed pretty okay, the bartenders were friendly, and nothing at all was in any way offputting...

...Except the beer, which sucked. They had a gigantic selection and all the pints were very reasonably priced, but of the four beers that I sampled, the best was just a notch above tolerable.

Don't get me wrong: this wasn't the Waterloo, Iowa Beck's Bar and Grill, where the beer actually tastes worse than the stuff that gets pumped out of a Mr. Beer kit. But everything *did* taste quite homebrewy, and not in a good way. In the vienna, for example, the hop profile was non-existent and the carbonation was so intense that I thought it was tearing the enamel off my teeth. The stout had a decent aroma and okay hop profile, but there was a strong aftertaste of dish rag.

Still, I got no beef with the place as a place. Some friends of mine went earlier in the day and the said the food was good, so maybe it's a fine place to visit. Just, don't get the beer.

Reviewed by AlCaponeJunior from Texas

3.5/5  rDev +5.7%
vibe: 3.5 | quality: 3.5 | service: 4 | selection: 3
One of my various bar hop stops on my latest trip to St Louis. This place was pretty nice although not spectacular. Selection was limited, but there were five new beers for me to try on tap and some stuff in bottles, but I was mostly interested in the on tap stuff. The dry Irish stout was quite good. Service was good, they were friendly and kept up with our orders, and also put up with our goofing around a little. It's certainly worth a stop if you're down on the landing. Definitely try the stout!
Oct 02, 2011

3.68/5  rDev +11.2%
vibe: 3.5 | quality: 3.5 | service: 4 | selection: 3.5 | food: 4
I stopped in here with 3 others while waiting to attend a wedding reception at the 4 seasons up the block. It was mid afternoon so this may not reflect what the place is like on a saturday night or during a big game. It was pretty quiet in the late afternoon, with college football on TV and plenty of places to sit.

Was greeted in a friendly way, which was true of pretty much everywhere I went during my trip to St. Louis. Had an Irish Stout which I thought was good, not great, and I reviewed it separately. Also had some chicken quesadillas which were good enough, typical bar food. Service was nice and quick enough for our purposes.

The vibe in here seemed to be a combination of tourist bar and sports bar...not super beer intensive for a brewpub. The whole strip on Laclede's landing is pretty touristy so I wasn't surprised..I'm from NYC and went to high school pretty much in Times Square so I know touristy! They had 5 beer styles on tap from a list of about 12 they make. Somewhat disappointed that the more interesting beers were not on offer. Didn't ask about other makers but from what I've read it's pretty much Bud so there you have it.

Not sure if it was because I was in a party of 4 that ordered 4 beers and 4 apps but I was given my 2nd promptly and without charge. That was cool enough. Buybacks are always welcome!

In short, you could do worse than to stop in here on a quiet afternoon. I was dragged to the Lou for a wedding and I was determined to try some new beers I can't get on the East Coast at any opportunity. The Stout was a solid B.

Reviewed by cagocubs from Illinois

3.45/5  rDev +4.2%
vibe: 4 | quality: 4 | service: 2.5 | selection: 3.5
Atmosphere: A nice location on the Landing in St. Louis, right off the cobblestone road. It is a large place with an upstairs and downstairs bar. I have gone several times and the atmosphere has varied. It gets crowded on weekends and after Chicago/St.Louis sports games. It is a cozy and comfortable place to go for a drink or to be entertained.

Quality: The selection could be better along with the beers they brew there. With that being said, the beer is much better than the Budweiser that packs every bar in St. Louis.

Service: This is the downfall for me. I have been there several times and have been treated like crap twice by the bartender. One time was understandable as I was wearing a Blackhawks jersey after they beat the Blues. The other was completely unwarranted. Very snappy for no reason, it was the same guy both times. No bueno.

Selection: Selection is okay as they have their homebrews on tap. For the most part they have most popular styles and a few seasonals.

Food: I cannot tell you how the food was, haven't tried it.

Value: Comparable to any other bar on the Landing. Reasonable.