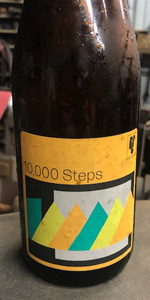 This one pours a reasonably dark black color, with a small head, and not much lacing.

This is a bit more sweet and decadent than usually expected with this brewery. There's less barrel than other beers in the Private Press catalogue, but it's definitely still here. It's mostly chocolate and maple, sweet and creamy, with a bit of vanilla on the back end, and enough roasted character to keep this from being too sweet. The stout aspects of this blend very much dominate the barleywine parts - I'd be hard pressed to guess this has barleywine threads without reading the label first.

This is creamy, rich, and not too boozy, with a nice drinkability.

This is somewhere in the middle of the pack for Private Press for me, but it was still quite nice nonetheless.

A: Froth retention has the minor survivability that’s justly undependable, and an appearance that ranges from dappled Salmon to spotty Heyna upon the collapse. The downfall leaves little room for a tacked-glass glueyness, but can be rigidly bullied thru a combination of time, temp, and minute maneuvers. Meanwhile, the body decants from black to grey carbon across an instrumental basis, with tints poking at old burgundy besides warming tracked maroon. Bearing on timing and thermal duress comes a form about formalness, in the churning of streaked tears. In the abstract, the degrees of protracted time push a scale that places the neck in a null state of affairs, while emphasizing the engravings (of heat) to orbed formations, upon the humidity of °F. Hereof, a decanted yield that’s optimistically short, yet righteously justified given the prompt(s)

S: The blend unfolds to barrel profundity with amended bitterness on penetrating malt. Early suits have a voice for sugar maple and red maple, besides sharp forest fruits with glacage allies. In back, a mild hop appeal that touches on orange peel, cut gardenias, and carved bow-wood; nevertheless, hop aromatics find early-on intimidation behind malt-y sweetness. Prominently, sweetly enriched dark fruits signal a vanilla coat, while sprawling alongside Bonafide Nugaton that margins PB. The blend inclines on sticky caramel and packs brown sugar deep, while fixating to a glaze. From there, barrel denotes whiffs to golden molasses taffy, while stemming coconut Burfi afore stale maple coffee. These recording present a clean viscosity, and a push for leaked sap to pelt bark on flourless cognac confections. The progression keeps an earthy (pine-like aid) concealment, from renovating a bitter monopoly. Yet, timely warmth connotes more herbal earth with campfire S'mores, as timbered mint becomes a desiccated spice. In the interval, dried cocoa pods float on over to a trailing furtherance in vanilla skins. That trail is not short in overall growth, as vanilla later redrafts raisins and figs dexterously. In due time, ventilation keys a slightly sweet/dry run of Amontillado, with muffled malt workings behind hazelnuts, plant-derived smoke, and piped tobacco dividing old book crevasses

T: An origination that foreshadows a motley depth through a presaged referential. In substance, maple is gentle while spotting Nicaraguan and Ugandan additions before each mold their own path along varied parallels. Suchness, ganache dark fruit inscribes to the embellishments, while a gratification levees the broadleaf Acer. The early settings ease oak into the party, by an aura that’s indicative to hardwood flooring. Simultaneously, a reference to an aged moniker in To'ak, which keeps to a distant stroll as oak and affiliations stay prepressed with early suppression. Yet, the contextual build formulates a copsewood path of expressive foretells. In the expansion, mid-palate elongates time with a new level of balminess, and funds caramel-cognac fondue with maple cream bonbons. There’s a fostering of emissions on carafe nearing earthwork parchedness, where a bit of hop characterization adjusts malts intensity. That accommodation is soft on bitterness, as the direction takes a refined stance on candied stone fruit, granite lavender, and drier caramel to char. To this extent, there’s a slight appeal to fruity esters upon the ventilating decant, which prep sherry-like behavior and a continuance for barrel density. That perseverance is later driven by a sunlit mass, where the offerings are served neat with leather hallmarks ahead of glue-trapped mosquitoes. Accordingly, cask redefines a dryness on To’ak with an enrichment for vanilla oak, and ricochets that near smoked brandied meat, besides maple glazed dates, before a corrosion to honey/toffee

M: A suggestive cue to dextrin for smoothness, while the body curves an enriched silkiness, from serration, to affectivity. The range is carefully rich from a grisly thickness, as the velvety conscious deters a saccharine buyout. On tiptoe is the embodiment of carbonation, which is charitable to earthy hops, roasted malt, and a textured diffusion. The blends onward movement becomes victimized to incalescence, but the overall power rejects burning for serenity, while backing tannin in the coda with the scraps of staves and skins

O: The agenda regulates the pitched fixtures and champions them habitually. Such that, the precursor stifles earthed vanilla for a cacao blitz, while maple arbitrates the senses. Sequentially, development finds a better placement to champion Ugandan, as the barrels enhance an oaked sentiment on the culmination. In this regard, vanilla works to vanillin, and coats late cask drifts from coconut char to cherry cordials, while maple bow staves pervade. A harmonious take on bold administrations, and one that’s well-adjusted to badge a smooth transition across the protracted (outdoor-dry) humidity