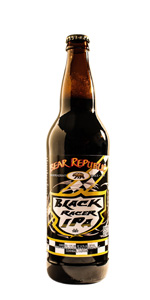 Notes: Black Racer™ blends Bear Republic's love of hops with the Pacific Northwest's appreciation for dark ales. Our pit crew brews this award winning ale which boldly defines a new frontier of flavors and always maintains pole position. Race to the Dark Side™.

Poured from a bottle into a large mug.

A: It pours a murky, dark brown (almost black color) with a short tan head that lasts for a few minutes before evaporating to a thin tan layer, leaving small patches of lace.

S: Has quite an aroma too it, I can smell it without having to bring my nose down. Floral tones predominate, as I would expect from the style.

T/M: Initially, it comes off to me as sweet, like mollasses and brown sugar. It's full bodied, rich and fairly carbonated. It finishes sweet, somewhat syrupy, but has a good follow through bitterness kick from the hops, although it's mild.

O: Quite a unique beer to me. I don't think I've had a black ale that was also an IPA, though I'm not really a fan of the latter. Nonetheless, this was quite an enjoyable beer, it was well balanced and robust. I'd have it again and I'd recommend.

The Beers of California

A: Black like the name with hues of deep brown in the light. Foamy coffee toned head with variable sized, persistent bubbles.

S: A vein of brown sugar and dark bread run through the nose with notes of flowers, citrus, and mint.

T: Shakable foundation of brown sugar and bread which attempts to support the dank nugget of floral, piney, and citrus hops. Strong bitter finish with a mineral-like edge in addition to moderate warming alcohol.

O: Obsessed with the IPA, the west coast continues to spew out variations to keep the public interested. This Black IPA lacks malt complexity and sports an average hop profile. Overall, a lackluster offering from Bear Republic.

Enjoyed this over lunch during a recent visit to Baltimore Alewife. Upon receiving this beauty, I was impressed: the body is an impervious tar black crowned with a splotchy cap of vanilla. There is a wispy scent of a cinnamon bun. The palate is slathered with dark chocolate syrup with small motes of Nestle Quik; all to be supplemented with minor bits of malt and charcoal.

As one who has come to enjoy this style, I found this one to be exquisite, cripsy and light with some hoppy chalkiness on the mouthfeel. Great quaff from the West Coast to be sure. As a bear might agree" Grrrr...! Now Boo-Boo let's go get that Pik-a-nik basket.

Enjoyed form the bomber in a pint glass, this interesting black ipa pours a thick dark blackish brown with a nice tan head that dissipates to a thin foam with light lacing. Nose of heavy citrus, thick molasses, chocolate, bittering hops, and syrupy sweet malts. Flavors are up front with bitterness and sweetness as chocolate malts and hops make a play for the front. Rich citrus hop flavors of grapefruit and bitter orange mingle with molasses and heavy sweet malts that comes off extremely well balanced for such a heavy handed profile of hops. Smooth yet bitter aftertaste is lightened by crisp carbonation that lightens the mouth feel with sweet dark malts.
Intense and bracing.

A hop heads delight who looks for some balance to their brew with a malt backbone.

Pours from the growler into an imperial nonic a deep garnet color with a blooming lighter beige head atop,aromas are full on pine and citrus over top of roast and bitter chocolatet,the way it should be in my opinion.Sharp and pickly pine hops on the palate with some dryer earthy tone,some roast and bitter chocolate comes into play as well but he pine resin wins out.This is what I want and expect for the style and the left coast once again brings it,love this beer.

Appearance - pours a cola brownish black. A nice finger of mocha on top, sticky and full-bodied. A hint of mahogany/red through the body.

Aroma - fairly roasty, an early light pithiness that fades into roasted grain. Sets up all dark and toasty.

Overall - excellent black ipa, glad to have picked this up.

Beer poured black with a nice tan head that is leaving lacing behind.

Nose has hints of roasted malts and citrus.

Taste is very well balanced between the roasted chocolate malts and the citrus hops. I suspect there was some hop fade over time.

Mouthfeel is medium to full bodied and smooth.

Overall this is a delicious beer. I will need to try this earlier next year to see how the hops truly are. Delicious beer nonetheless...rates up there with Odell, Stone, Uinta, and Firestone Walker's versions. Recommend.

The aroma is roasted chocolate malts with some rye notes.

The flavor is some sweet chocolate malts with a lot of acidic roast bitterness with some pine. The mouthfeel is medium bodied with low carbonation.

Enjoyed on tap at the Tap Room. A story of Cascade, emphasizing the hop as opposed to roast. A sipper, as alcohol warming. Piney aroma. Some toothpaste taste, also apple cidery in the finish. 75 IBU Black with lace and some head. Not bad, worth a try, however not the best of the style.