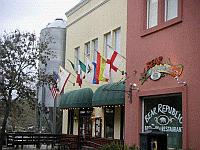 The day after New Years day was slow it seemed, but things were slowly getting back to normal, I planned on driving home from Santa Rosa in the early afternoon but not before taking the trip to Bear Republic. 15 miles straight up the 101-N from Santa Rosa, once you take the Central Healdsburg exit its less than a mile away. My drinking buddy for the New Years Eve weekend Rapapoda directed me to the Parking Lot that is behind Bear Republic.

A cold, very wet and windy day, the outside seating deck was soaking and covered in dead leaves and wind swept fauna and debris from the last few days. A quick close of the eyes soon had me imagining how great this outside deck area must be in the warmer Californian climes though. The exterior of Bear Republic is dominated by a tall galvanized ribbed steel hopper on the corner. The frontage is a two-tone cream and pastel rustic red with a series of Flags of Nations hanging outside.

Inside, the basic down to Earth feel is at odds with many of the surrounding high end Sonoma Wine Bars, Restaurants and Craft Shops. An arched walkway runs down the middle of the single room. To the left tables litter the lower deck and these were sparsely populated during my visit. I always like to sit at the Bar so Raps suggestion that we should was greeted with a welcoming affirmative nod. The bar area is raised up to your right and as such it lends a nice view over the interior of the Bear Republic Pub and the seating area. The Bar has around a dozen taps with a mish-mash of tap handles, all sporting the black, red, yellow and green Jamaican color scheme in some form or other. As with nearly every other bar I visited around these parts during my New Year Eve weekend Bicycles were hanging left right and centre, as indeed were yet more Flags of Nations. Artwork is prominently featured here also, the odd beery advert and bits of Racing Cars.

The Brewery is visible to your left as you sit at the Bar; in fact it is right at the end of it, hard to miss. Fermenting and storage tanks were visible through large glass windows behind the Bar. It seems like the whole Brewery and associated vessels are really wedged in here. A real bonus was the utterly incredible aromas filling Bear Republic during my visit, as they were brewing, neat!

Whilst the décor is so-so, the beer range was absolutely solid. From memory they had Big Bear Black Stout, El Oso, Hop Rod Rye, Petes Brown Tribute Ale, Racer 5 IPA, Red Rocket Ale, XP Pale Ale, Simply Simcoe #2 and Red Wheat. The Hop Rod Rye was on Cask also. I started with the El Oso which surprised me, better than expected. I also had a Pint of the Red Wheat and finished with a half of the absolutely gorgeous Hop Rod Rye on Cask from the lone Angram behind the bar.

I didnt really eat here, but I snagged a small bowl of Lobster Bisque which was thick, creamy and lovely, couldve done with a little more of that. Menu looked varied enough but still seemed to focus on Pub Grub.

Service was reasonable, but the server behind the bar was not very adept at using the Beer Engine, for instance she served Rapapoda the first pull of the day from the lines. Now to be fair Rap requested that she throw it away and serve a fresh half once the line was pulled through which she did. Still, she clearly hadnt been properly trained to use a Beer Engine, having the glass inches below the bottom of the Beer Engines spout and spraying the beer into the glass, not her fault I know, but always a minor annoyance I find.

Lots of Bear Republic clothing & apparel on sale, as well as beer to go, 12 and 22 ounce bottles together with some kind of inflatable plastic cube thingy too if you fancy a bigger sized take out.

It was absolutely great to finally get to Bear Republic after all these years of drinking their fine brews, and being a fan of them. It is quite remarkable how they brew so many high quality styles from such a tightly packed Brewery, and I love the odd English style special that they knock out once in a while. Well worth stopping by here, a no-brainer if you are in Santa Rosa, its only 20-25 minutes away.

Visited 3-July-19 and enjoyed a Racer 5 after a day of wine tastings. Quiet late afternoon crowd except for bar seating full of locals. Good offering of core brews and a few specials. Friendly efficient service. Mecom car auction on the TVs complemented the racer theme.

Excited I got to finally try Double Rocket and Racer 15, which were both damn tasty! And their new sour...though it was definitely underwhelming. Ordered the pastrami sandwich with fries which were mediocre at best but the Mac n Cheese with bacon for an appetizer was fantastic! Left with a growler of Barrel Aged Old Baba Yaga which was delicious. If you're stupid like me and visit the area during the Pliny the Younger release and don't feel like waiting hours in line for a beer then hit this spot right up the road. I'll def be back

The brewery was a little tricky to find, but a welcomed site once inside. My party sat and ate lunch first and then bellied up to the bar. The wait staff was a little sub-par as was the food service, but the bartender was awesome! Sampled four of their beers and enjoyed everyone.

Was drug there by a friend who loves this place... but I had a very average experience

The Bear Republic in Healdsburg (haven't been to the new Rohnert Park location) has a great atmosphere, service, and food. The burgers are top notch, there's a huge selection of beer and local wines; there's something for everyone in here. It's a perfect locals pub, and great to eat at if your in town wine tasting.

Excellent low key vibe. If you like IPA's this place is awesome, but other selection are limited. Service was fine for a busy Saturday. Decent selection of their beers. The main thing about this place is that it is basically a restaurant setting and less like hanging out at a brewery. This is not necessarily a bad thing, just a little different from other places in the area. This does mean that the food is excellent, I had the Saturday special, Salmon Avocado Sand-which and it was killer. I would say if you are near by it is definitely worth a stop for lunch and an IPA or 2.

Checked this out on the drive up to Eureka. Filled with locals catching a beer, this place is cozy but non-descript considering the brand. They do offer 8oz pours which is nice since I was driving up. Food seemed to be standard pub grub.

(#26 of 49) We stopped here to try their beers and to have lunch. The place is located along a busy retail street in the downtown area, and is situated off the street along a walkway that runs between two retail buildings. The large interior has good vibe, but we chose to sit on the covered rear patio that overlooks some park-like property.

We ordered the house flight and the barrel-aged flight that together consisted of 11 of the 19 beers that were on tap that day. Each of the beers was brewed very well to style, and we decided that all 4 of the barrel-aged beers deserved a B+ grade. The other 7 were given scores of either a B or a B-minus so that the overall grade was a 4.0. Some beers were were available to go in bottles, and growlers were also available.

The food here is excellent too. The outdoor setting along with the great beer and food made for a great visit. We'd definitely revisit this pub if ever in the area again.