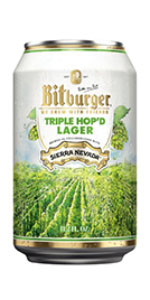 Rated by jackhendrix from Texas

Flavor is bigger and bolder at first than I anticipated but it loses steam a little in the finish. Solid balance with a nice hop mélange that really does evoke a proper IPA. You get the broader pine and citrus along with the quenching herbal and medicinal qualities. Texture is tight and carbonated, but it works. I can definitely see the appeal, especially when in the mood for something lighter or outdoors in warm weather.

Reviewed by AnalogReigns from North Carolina

3.79/5  rDev -4.1%
look: 4 | smell: 3.75 | taste: 3.75 | feel: 4 | overall: 3.75
A: The beer is very hazy dark yellow in color. It poured with a quarter finger high white head that left a collar around the edge and some lacing on the surface and down the sides of the glass.
S: Moderate aromas of floral and citrusy hops are present in the nose along with strong underlying notes of caramel malts.
T: The taste follows the smell and the hops only contribute a light to moderate amount of bitterness.
M: It feels medium-bodied and very clean on the palate with a moderate amount of carbonation.
O: This IPL has a good balance between the malts and hops.

Reviewed by brewerburgundy from West Virginia

If I didn’t know, I’d think this was one of the proliferation of hazy IPAs. Hazy sunset tones with a decent white head, some retention.

Orange slice, a little pilsner malt. It really smells a bit like a crisp hazy IPA.

Finally got my hands on this through a friend. I cut it some slack based on the age and can certainly taste the blend of American hops and German style.

Aromas: Moderate aromas of orange and bread. Some lingering orange citrus soap and pine underneath. Very reminiscent of a Sierra Nevada Ale (4.00)

Flavor: Flavor follows with some strong German bread and German lemon citrus upfront. A slight cloying orange underneath that dissolves into a rather dry, pale German bread malt flavor. A lingering citrus bitterness on the tongue. Sort of like Sierra Nevada Champagne. (3.75)

Overall: A pretty tasty beer overall that mixes between an IPL and a Helles lager. It has nice German Noble and malt flavors as expected, but also has a definite Sierra Nevada yeast strain to give it the cloying orange soap and pine flavor. This would be the IPL if Sierra Nevada had one. Sort of like Sierra Nevada Champagne. A great body though that is full and bready. A well-craft blend of great beer! (Final Rating: 3.94+)

4.2/5  rDev +6.3%
look: 4.25 | smell: 4.25 | taste: 4.25 | feel: 3.75 | overall: 4.25
Pours a rich full golden with a large fluffy near two finger bone white head that sticks like glue to the glass a s it creeps down ever so slowly into a frothy mass.Big fruity hops in the nose,I get a good amount of apricot and orange,a light smattering of cut grass is detected as well.Citric and bright on the palate with a firm lightly sweet malt base,extremely quaffable.Wow what a crushable but very flavor lager here,love the hop complexities.
Nov 13, 2020

3.43/5  rDev -13.2%
look: 3.5 | smell: 3.5 | taste: 3.5 | feel: 3.25 | overall: 3.25
i had such higher hopes for this, not a bad lager, but like, weirdly substantial, malty, and bitter more than flavorful or aromatic from the hops, i expected a delicate european lager with some hop kick, but its not really that, its sturdy and fuller and almost autumnal, but it didnt impress me in terms of overall quality, which is shocking for the breweries involved. sometimes its not greater than the sum of its parts, like these two just havent meshed their best facets too well, also surprising because of the collaborations sierra nevada has done with other german brewers that have been so successful in the past. i am not calling this a failure, but it didnt strike me as anything too special either. slightly hazy light amber colored, average white head, fine carbonation from the tap, green hop nose with some bitterness and generic citrus pith character, doughy european lager yeast, and way more from the grain than i expected or wanted really. the flavor is about the same, weird proportions for what it is, nowhere near as well refined or seemingly as patiently lagered as i thought it would be, and really kind of generic in a way thats just overly malty and bitter for a lager, maybe i expected too much from this. the taste stays with me awhile, it feels heavy even with a lighter lunch, and didnt quite hit the mark for me. almost in the india pale lager range, but also still european, but then its malty for what it is, illogical in a lot of ways and to me a bit of a miss, at least this time around...
Sep 19, 2020
Rated: 4.5 by redfox405 from Virginia

3.89/5  rDev -1.5%
look: 4 | smell: 3.75 | taste: 4 | feel: 4 | overall: 3.75
Enjoyed chilled from can into willybecker
Pours a golden amber shade lightly hazed with a 3 finger white head with rocky appearance with lace that sticks and very good head retention
The smell has a light herbal and spiced hop odor with yeast providing a light bready scent
Feel has balance of bitterness with malt sweetness that is mild dry finish moderate carbonation and low alcohol influence on texture that ends more on the bitter side
This lager tastes very mild yet nice hop aromatics as it warms slightly yet more of a noble type herbal flavor with subtle bitterness and malt is cracker like with gentle taste compared to hops with mildly warming finish with semidry quality as hops linger with resins coating the mouth.
I would drink this again preferably on tap but the can was fresh tasting with date from January no apparent oxidation a good enjoyment level ov

Ever since I started brewing my own beer, I have grown to have a very great appreciation for the lager style. Unlike ales, IPAs, stouts, porters, and the rest, the lager take work (and skill.) So, when I used to avoid lagers as something I have grown up from, I am now gravitated toward them than when I was in high school. As a result, when I see something like this collab between Bitburger and SN, I knew I had to snatch one up to try, and I am sure glad I did. Nevertheless, having learned about brewing as much as I have over the past year, I have mixed feelings about this offering. More bitter than the normal lager style, more flavorful, I find that the bitterness kinda turned me off, but also helped me appreciate the work that went into creating this. My grading reflects this torn attitude, but I will tell you, this is worthy of a try and even two or three...

The pour is orange-amber with a foamy white head. Moderate clarity.

The aroma is made up of grassy and floral hop notes and a white bread character underneath.

The body is smooth and light-medium.

The taste is sweet but the hops seem stale. I still get a floral and grassy flavor. This was not as special as I hoped it could be.

3.57/5  rDev -9.6%
look: 3.5 | smell: 3.25 | taste: 3.75 | feel: 3.75 | overall: 3.5
L- Mid-dark amber, slightly hazy, pours with 3mm white head.
S- Smells of fruit, over to the citrus side of fruit, orange < > grapefruit.
T- More subtle than I anticipated. I can clearly ID the above^ citrus note, it tastes exactly how it smells, but it's not a blunt instrument that some modern beers using these fruity hops can end up with. The citrus here seems quite subtle to me, to the extent that after a bit I don't notice it any more.
F- What I noted on the first sip is it's hoppy-dry on finish, and that facet of the hops continues now about 1/2 way through the glass. It's refreshing, simply like a well hopped lager might be.
O- I do not favour prominent citrus notes in my beer and when I smelled such I was worried. However here the taste of citrus is subtle enough it never intrudes. I doubt their is enough drama and challenge in this for the hipsters out there, perhaps it's more of a contemporary palate beer for those seeking a balanced profile but with a distinctive character of it's own.
330ml can. Bought from Wholefoods, London W8 £1.99 BB: 13/02/2021

Smell: A lot of aromas that remind me of belgian wit beer like clove, esters, coriander, and orange peel....lots of orange. Spiciness and lager yeast/funk on the back end along with some bready, crusty aromas. Non-descript hoppy aromas that are well-integrated.

Taste: So refreshing and enjoyable. Not like any other lager I have had before. Tastes more like a Belgian beer than a German one. Very interesting how well the American hops are melding with the German hops, yeast, and manufacturing process. Up front, some grapefruit and orange flavors with spice then the finish is super dry and bitter that lingers long with citrus peel and Sierra Nevada's classic usage of hops. And the finish, which is what makes this unique and fitting to be an India Pale Lager, is like that of a crisp, refreshing lager but has a lot more interesting flavors throughout. Definitely a crusher.

Feel: Above average carbonation, appropriate for a crisp lager. Light to medium body.

Overall: This is definitely a winner. This is one of the beers that helped turn me on to lagers. I may have to pick up more of this while it's still available in stores. If you like Belgian pale/strong ales or European lager beer, you would probably really enjoy this. It does a great job bridging many gaps between German, Belgian, and American traditions. Would also pair very well with a variety of food. Prost!