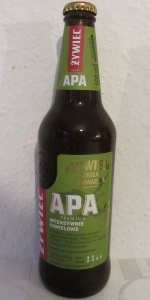 Rated by Pmicdee from Canada (ON)

Pours a clear amber-gold with a smallish head and moderate to low carbonation. Smell is straw and wheat. Maybe raw malt.

Taste is sweet, malty, lagery, with a little hops. This would go better labeled as a hoppy lager.

Mouthfeel is syrupy. Overall, not a fan.

Good balanced bitterness and apricot from the aroma, though it does not blow you away.

The taste is similar...neither the bitterness or fruit dominate, it's well balanced though a bit uninspiring, as though it is mass produced for the masses...which it pretty much is considering Zywiec are owned by Heineken.

Unfortunately this is the only IPA/APA in many Polish bars, as Heineken seem to have a partnership with at least half!

Overall it's a very tame and easy drinking IPA, however it's still the best thing on the menu in many bars around Warsaw. It's pretty good still overall

Has a decent balance of pale malts and floral hops. Very middle-of-the-road for an American Pale Ale, without much in terms of intricacy or subtlety.

Drinkable fare from Zywiec, but not a brew I'd buy again with the myriad superior options available in Poland.

Reviewed by PlutonowyManiek from Belgium