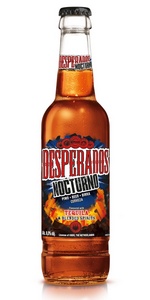 Given Desperados original is a guilty pleasure of mine, I had to snatch up this clear bottle when I spotted it in a convenience store in Wroclaw. A pull-tab would like right at home on this bottle, but instead it's a branded black pry-off crown cap. Shame...

Reviewed live. Expectations are low given the clear bottle presentation and "Flavoured with Tequila & Blended Spirits" bit on the label.

HEAD: ~2.5cm wide. Thin, weak, fizzy. Recedes fully within 1.5 minutes (definitely below average retention), leaving no lacing on the sides of the glass. Pretty poor across the board.

BODY: Clear dark copper with gold and amber hues, though that description makes it sound more inviting than it is. No yeast is visible within, so it's got that clean lager look to it. Still, it seems syrupy.

Not a great appearance, all things considered. In terms of purported "tequila beers," Desperados original is superior.

AROMA: Artificial as all hell. Spritzy lime juice, malt extract, maybe some artificial tequila flavouring. I find no agave/cactus, or even any tequila spice. Luckily, there's no tequila heat either.

Suggests a beer that maybe isn't as syrupy as I feared.

TASTE: Artificial, sure, almost tasting more like a soft drink than a beer. Artificial lime juice, artificial tequila flavouring, cheap caraMunich malt syrup/extract, and generic malted barley sweetness. It's definitely quite sweet, but not cloyingly so. I find no true tequila flavour (agave/cactus, spice, etc.). But the lime juice - artificial though it may be - does help cut the sweetness with a citrusy character.

It's quite a shallow build, lacking any real depth of flavour. Flavour duration and intensity are average. Straightforward but not simple per se, offering more variety of flavour than most pale lagers would. I wouldn't call it balanced, but it's not imbalanced either.

I wouldn't say I like it, but it's approachable considering the circumstances. This isn't the salty boozy cactus sludge nightmare it could be.

TEXTURE: Spritzy from the lime. Smooth, wet, and, okay - a little syrupy - but it's manageable. Slightly sticky, sure. Not too acidic or anything. I expected worse given the aroma. This doesn't accentuate specific notes from the flavour profile, and there's no perfect idyllic harmony of texture and taste, but it does a decent job of staying out of the way of distracting from the flavours.

OVERALL: I can imagine a tequila flavoured beer being so much worse. Not as good as Desperados original, nor is it really worth trying - but it's better in many ways than you might expect, and shouldn't be dismissed as a beer-cum-alcopop. Some of the choices the brewers made work well; I do like the artificial lime to a degree, though more of a natural acidity would give the beer a more authentic taste. I'll happily finish the bottle, but it's not a beer I'd trifle with again.