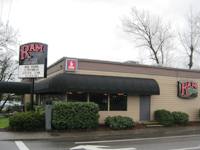 Not interested in a full review of this place as the others have covered the place quite well. A medium sized sport bar with a great location. Busy road on two sides with the small but fish friendly Mill Creek just below the balcony (outdoors) on the South side. Large sports fan and bar area with a smaller somewhat segregated family eating area near the entrance. I have always had excellent food here though the menu seems to keep shrinking. They used to have an awesome prime rib supersized meal for about $16 that had a slab of bone in prime rib so large people would stare when they brought your plate to you. I think it was a full 16 ounces of meat. I would eat half and take the rest home for tomorrow's lunch. The price was about 30% more than the normal prime rib serving. I have had their fahitas also which were good but not the best seasoned IMO.
One big plus is growler fills. On the weekends the growler fills are half price. This works out to $5.50 the last time I stopped in for one. I enjoy most of their beer offerings but usually get the 71 Pale Ale. Not sure if the half price would be applied to special limited beers.

Been to the Ram many times, especially during tax season for our euphemistic "union meetings" or code for leaving work early to hit a pub on a Friday afternoon during tax season. Beer is okay; selection is typical with several varieties, nice that it is brewed on the premises, but nothing spectacular. Food and prices are typical pub fare. Good variety of on screen sports venues. A great place to hang out during summer when there is no threat of rain since they have ample outdoor seating.

Stopped in with a few freinds from work while out in Salem on a work trip. When we arrived there was quite a wait for a table but we we quickly assisted by several waitresses/bartenders making sure our visit was worthwhile. The beer selection was decent having a red, pale, porter, IPA and a couple others. The beer was decent but nothing to write home about. The food was actually the best part. I had a pizza and a salad. The other three I was with also enjoyed their meals. If you get a chance to stop in I'd say go for it. That being said, I wouldn't seek it out.

I will say this out of order. The best thing about this place was by far the service. The food was really quite good along with the beer that was above average. I love the atmosphere of this place (in the bar area), but the rest of the dining area was a bit standard. But by the end of the visit the most impressive part was the service. I was there on a Sunday with NFL games, with quite a few customers, but I never felt as though I was just one of many customers, with the waitress paying close attention to everything I needed/asked for. I had their IPA and the Buttface Amber, with the latter being the better of the two. Their chicken wings were exceptional with the Reuben being quite good. My girlfriend got a standard burger with sweet-potato fries that satisfied her, along with her beer. In total we had 3 beers, wings, a burger, and a Reuben ringing up around $42 without a tip, which I gave accordingly. Next time I find myself in Salem I will make it back. It must be noted that I like the Ram chain as a whole.

This is one of those places that is kind of like a brewpub in a box. Nothing creative or artistic about the beers, but they brew standard non-offensive recipes with minimal uniqueness to them. Think Golden Valley, McMenamins, etc. The beers are as described, small on flavor but OK for the styles, the service at this place was decent considering we were in a rush to get to a game, and the food was good pubfare stuff. Nothing really to complain about at all, but nothing to write home about either.

Situated midway between Portand and Eugene, Salem is clearly the redheaded step child of Oregon brewing. I'm unsure whether this is an underserved market or a market with a limited clientelle, but Salem has only three places that brew their own beers. That being said these are bright spots that glow all the more brightly for their seclusion from Oregon craft brewing's focal points and this place is the best that fills that niche in Salem.

In my opinion Salem's best brew pub is the Ram restaurant and Big Horn Brewery located near downtown Salem. Excellent beers, a delicious and variegated menu, good service and a clean and professionl operation make this place on par with any brewpub I've been to. Last time I was there they had at least three seasonals on top of at least half a dozen regular brews. I usually hit the seasonals first due to their temporary nature. This time I had a the doppelbock and stout both of which were quite good.

I've worked my way through the beer list a couple of times during three visits and having tasted each of their beers I've enjoyed them all. The pale ale is my stand by favorite.

The food is upscale pub fare, delicious and plated well. If I had a complaint, the last time I was there I paid $17 for a very small, but tasty salad with a small piece of Salmon as an add on. It was really quite small. I'm not into cuisine; I want good food and I also want to be full at the end of the meal.

In good weather a creek makes for a nice backdrop for outdoor dining.

No reflection or criticism of this eatablishment, but Bighorn Brewing is a chain, as are the other two Salem brewpubs (both McMenamins) and I'd really like to see a Salem-only brewpub.

Ram (Bighorn Brewing Company) is a chain, with locations in Idaho, Illinois, Washington, and Indiana.

Atmosphere is definitly Applebee's or generic sportsbar. Staff is friendly and quick, based on my one visit there. One of our appetizer orders got mixed up in the kitchen and she gave us basically 2 appetizers for free. No complaints, heh.

Beer is actually quite good! They have a solid sampler with a good number of seasonals/specialties. I really liked their IPA and a seasonal Red.

Food is very TGIFridays, Applebees, RubyTuesdays. It's tasty, with really good happy hour and appetizers. Dinner prices are 15-20 range, but happy hour stuff is less than $5 and really good.

I feel kind of sorry for Salem. Cities on every side of it have award winning breweries. Salem has only chain microbreweries.

My wife and I stopped in for lunch on our way to Portland. We had never been to Salem and this seemed like a good place to stop. I agree with one of the other reviews that it has a bit of an Applebee's feel to it - meaning a bit generic and chainlike. However, the beer was very good. I especially enjoyed the Total Disorder Porter w/nitro and Buttface. The food was above average chain fare. You can take home a growler of any of the beer selections they are offering. All and all a nice place. I would definitely go back if I am in Salem again.

The Ram in Salem is an interesting case. While it is very clean and very nice inside, the overall vibe of the style of its decorations and insides is reminiscent of an Apple Bees. The crowd on any given evening can be a nice professional sort or of a college, frat boy crowd who would prefer the ho-hum guest beers (Bud Light and bottles of Corona) over the house brewed selections.

The beer available on tap is generally pretty solid: a porter, amber, a hefe, an "Oregon blonde ale", an IPA, and at least one seasonal selection does warrant a choice occasionally. The quality of the all the time brews is consistent with each visit but these beers do seem to be bland on most occasions. The seasonal often do offer some decent and fairly flavorful selections, a one time only oatmeal stout truly sticks in my mind.

The food is high quality and the service always very nice. The prices are fairly reasonable for beer (growlers are quite reasonable on the weekends), but food can be ultra-reasonable (happy hours) or a little pricey (the higher priced dinner selections).

While this is a chain brewpub, The Ram in Salem is, although kind of unremarkable, a decent diversion to the person living in Salem. My fiance and I lived two blocks from the pub during most of our time in Salem, and we found it a nice diversion and way to keep away from some of the more generic and trendy spots in town.

Had lived in Salem now for over four years, but had never gone to the biggest Brewpub in town, don't really know why.But tonight I decided to go meet some fellow BAs at an event here.
This is one large brewpub compared to others in the Salem area..theres a nice atmosphere as you walk in the door.The bar does seem a little "glitzy" for Brewpup..very nice classy decor and a massive TV takes up the whole wall behind the bar.Theres a full bar this place serves liquor too.
The beer selection was very nice they make quite a few good brews here and I never saw a tap with Bud or Miller..though sadly they did have Corona. Maybe Corona was for the folks on the outside deck!.
For a wenesday night this place was very very busy, hate to see it on a weekend night. They did not have enough staff behind the bar..one harrassed girl who was very nice but not too knowledgable about the beers.
Great food here too..nice menu.
This place wone "Best large Brewpub of the Year" at the GABF 2001.

The Ram Restaurant & Brewery in Salem, OR
Brewery rating: 3.72 out of 5 with 15 ratings