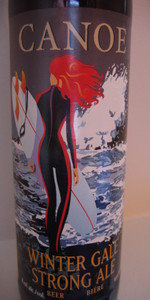 New seasonal release from one of Victoria's premiere brewpubs.

22oz pours into a snifter a brandy/caramel auburn with barely any head, which leaves light lacing down the glass. Sediment in the bottom.

Taste is caramel malts, some heavy brandy notes (though this could be emphasized simply because of the alcohol notes), cloves, hints of citrus, some really light hints of cinnamon. Light esters that come into play more at the bottom of the bottle. Heavy alcohol taste in the finish, light carbonation. Slightly watery body as you progress.

Wow, this would warm any belly. It has sharp liquor notes and even a hint of that liquor warming down the throat. Not necessarily a bad thing but it seems to blur some of the other flavors. It swings back and forth in flavors and mouthfeel and feels like it needs something to anchor it a bit more. On the bottle it states, "Improves with age" and this I don't doubt. I would really like to see how this one lays down and I am going to see if I can find another bottle for just that reason.

Tempting though it might be for a beer called "Winter Gale", it'd be a bit strong to say that this Ale "blows". However, Canoe's winter warmer only routinely fulfilled its job description, and failed to impress otherwise.

I bought it on a suitably grim evening, and perhaps unfairly tasked the beer with providing an instant fix of ruddy jocularity. I (too?) vigorously poured half the 22oz bottle into a brandy snifter, and witnessed a bloomy white head rapidly collapse like a bad souffle atop the impressively clear caramel-coloured ale.

Encouraged by the previous reviewer, I expected to get hit with a festive blast of brandy and dried fruit. Mild spices, brandy and dates were detectable, but vaguely -- it was like sniffing a box that had once housed a Christmas pudding a long time ago.

The taste was curiously weak. I might have hyped this one up for myself, so take my review with that in mind, but the rich, warm flavours I had expected didn't arrive. It tasted pretty boozy, and mysterious traces of fruit and cloves came and went, which was pleasant. But to be brutally honest my first impression was of a house ale with a shot of cheap brandy dumped into it. That sounds harsh, and to give fair dues it improved with time (and temperature). By the end of the 22oz I was certainly warmer and more cheerful, and I'd learned to appreciate the subtle flavours.

In the mouth it was thin and flat without much character, but very smooth and the alcohol, while prominent, didn't burn or anything.

The blurb on the back says that this beer will improve with age, and I bet that would bring out one or two of the flavour notes that are merely hinted at in its young phase. As it is, it doesn't have enough going for it for me to consider buying another one.